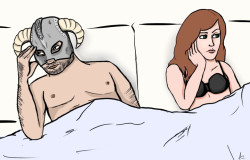 “Just because you lost your virginity doesn’t mean you can go around throwing your cat at everybody!” Leave it to Easy A to preach the wisdom.

I know the mere word of “college” can trigger a tsunami of titillation, especially the kind that makes your nether regions tense up in anticipation. The concept of freedom is as magical as freedom itself, and the liberty to choose casual sex partners without the judgment of your gossipy high school peers or your helicopter parents makes for a tempting proposition indeed. But it’s not that easy.

All because you can “throw your cat” at people in a casual manner howsoever you wish doesn’t mean you should. Offering access to your glory parts with the foolish belief that strings will never attach is cause for skepticism. In an effort to lend some of you incoming Gauchos a hook-up hand, here are five signs that the casual copulation of your impending college career isn’t as casual as it seems.

1. Skyrim, Quentin Tarantino and dinner dates
If you and your noncommittal playmate begin to commit to suspicious acts of dating and loads of quality time together, you’ve reached a big no-no. Reevaluate the purpose of the relationship and speak up about it. Tell your sexual buddy-o the truth. “I’m only interested in the game because I’m interested in you.” “Excuse me, Fridays were never our night to watch Django Unchained.” “There’s no reason why I would ever think of taking you to dinner for an anniversary.” What anniversary? You aren’t together.

2. The curse of the green monster
Jealousy is a subtle and nasty little indication that what’s being said and what’s being felt aren’t matching up with each other. Look out for this annoying sucker in both yourself and your partner. Casual goes personal when green gets into the picture.

3. Much cuddle, such wow
This one’s a classic. Cuddling for a little bit after a casual buckin’ n’ bangin’ is fine, but if you’re doing it all night and all morning, I’m telling you. Something’s up. Love, affection and post-sex snuggling feel amazing, but those should come from the boyfriend or girlfriend, not the hook-up. Even if you’re absolutely sure that cuddling has no intimate impact on you, it might not be the same for your pillow-sharing spooner.

4. PDA and pet names
Good grief, no. If traits of your sexy-time start trickling public with handholding, kissing and adorable name-calling, you’re hitting the danger zone. External (and internal) expectations of the relationship as well as your reputation will be affected, not to mention how awkward your friends will feel.

5. Trust the science
Some of you might already know that sex triggers the release of dopamine (our natural happy drug) in the brain. However, did you also know that orgasms trigger release of oxytocin and vasopressin, which in turn can trigger feelings of attachment? Research revealed by Rutger University’s anthropology professor Helen Fischer indicates that 50 percent of people who hook up do it to start a relationship — and one-third of these people actually succeed. The innate nature of sex, as told by clues of chemistry and evolutionary implications, can be tied down to deeper, more complex emotions of connection. It’s inevitable.

I’m not telling you to avoid casual sex and have that dream wither up, nun-status. One, that isn’t my right, and two, that just isn’t right. On the contrary, my words to you are a friendly reminder that when you embrace your college sexcapading, make sure you communicate with your sex buddy about both of your underlying motivations. If you catch yourself always experiencing the aforementioned signs, you probably need to reevaluate the reasons behind your so-called “casual.” There’s nothing wrong with sex under the pretense of romance, but if you and your partner don’t own up to this and instead pretend it’s all about the big “O,” one or both of you could get hurt. It’s best to be real about your desires and the core reason behind why you’re doing what you’re doing. It will give you power to make the right calls and the right decisions.

So, all in all: Respect the cat, and respect honest sex. Once the alarms start blaring, either get ready to romance, or get yo’ ass outta there.

R. Pengsta loves cats and does not advocate the actual throwing of said felines.

A version of this article appeared in the Wednesday, August 27th, 2014 print edition of the Daily Nexus.

Views expressed on the Opinion page do not necessarily reflect those of the Daily Nexus or UCSB. Opinions are submitted primarily by students