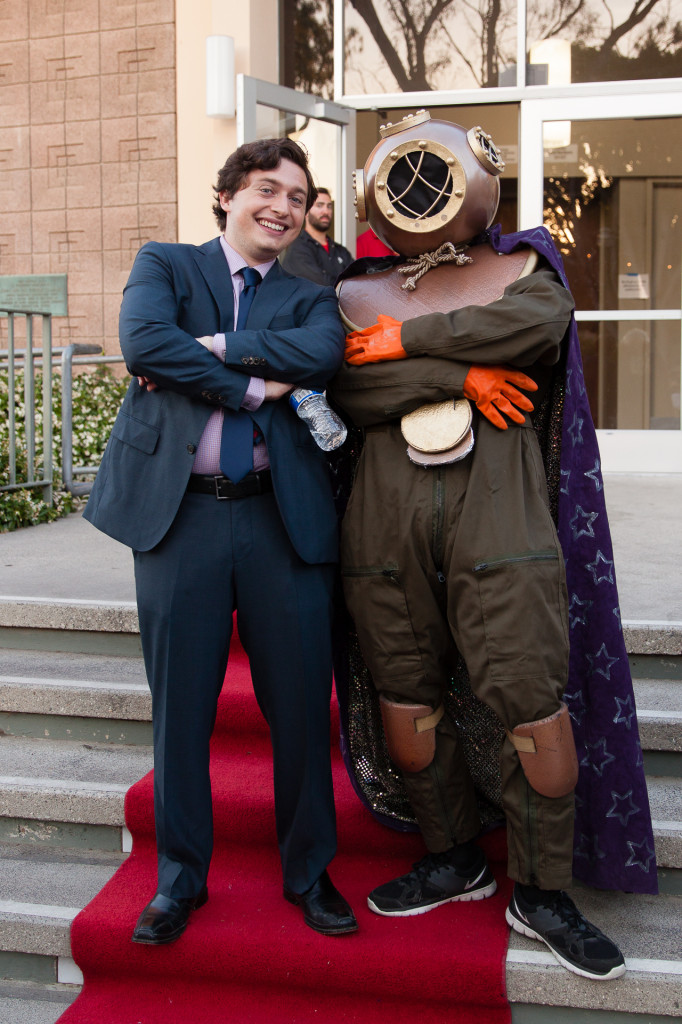 The 23rd annual Reel Loud Film Festival, UCSB’s largest showcase of student films, music, art and dance, was held at Campbell Hall this past Friday. Fourteen silent films were shown on the big screen, each with their own live music accompaniment.

In between the showings, the a cappella group Naked Voices performed, along with a dance group, Urban Dance, followed by a closing set from San Jose indie rock band A Yawn Worth Yelling. It was a classy, red-carpeted, successful celebration of UCSB’s diverse and talented artists.

The Reel Loud Film festival began in 1991 to provide film students with an opportunity to publicly showcase their work. It originally featured only silent films shot on 16 mm film, reminiscent of the beginnings of cinema, but has recently become fully digital to allow for more flexibility in budget and post-production editing for students.

The films this year ranged widely in subject matter and style, from historical to absurdist, romantic comedy to experimental. Every film was exceptionally shot, composed and edited. The musical accompaniments fit the films very well — no score or song felt out of place.

“WASHITA (good hunting ground)” by fourth-year students Parker McMillan and Vincent Reyna, takes place somewhere in Arkansas, 1801, two years before the Louisiana Purchase. It follows one Native American’s heart-pounding hunt through a forest and stars Avi Baughman, a SBCC student and descendent of the Caddo tribe. The Caddo tribe are originally native to the area around East Texas, Northern Louisiana and parts of Arkansas and Oklahoma. Baughman wore traditional clothing onstage and composed the live music accompaniment himself.

One of my personal favorites of the night, “A Flight to Paris,” directed by Edward Oh, was filmed in France and featured exquisite shots of the city from the perspective of a wandering tourist. It concluded with a quiet, sparkling view of the evening skyline from the Sacré Coeur.

The Audience Choice award went to “A Man, A Mustache,” directed by Johnny Rafter and produced by Jesus Garcia. It was shot in black and white, in 1920’s-Buster Keaton-esque style, but with a touch of tongue-in-cheek melodrama and humor.

Mya McCann, third year literature major in the College of Creative Studies, who also stars in “X,” the last film shown at the festival, described the sense of community and collaboration between the filmmaking teams.

“It was a great privilege to work with the Film & Media Studies Dept. on these films. Everybody helps everybody with their projects — it’s like a community,” McCann said. “I was impressed by all of the movies that were shown so it was thrilling when the films I worked on received awards.”

Sadly, the festival happened to take place just before a horrific and unforgettable tragedy struck Isla Vista, less than a mile away.

However, the incredibly imaginative, original, and high-quality work exhibited at the festival, along with its joyful and supportive atmosphere serve as a reminder and testament to the enduring spirit and strength that make UCSB the special community that it is. This longstanding tradition and the hard work of all of those involved in making another wonderful festival serve as an example — for me, at least — of why I am forever proud to be a Gaucho.

A version of this story appeared on page 11 of Thursday, May 29, 2014′s print edition of the Daily Nexus.