The Daily Nexus
News
Recent Tragedy Incites Gun Debate
May 28, 2014 at 5:00 am by Carissa Quiambao 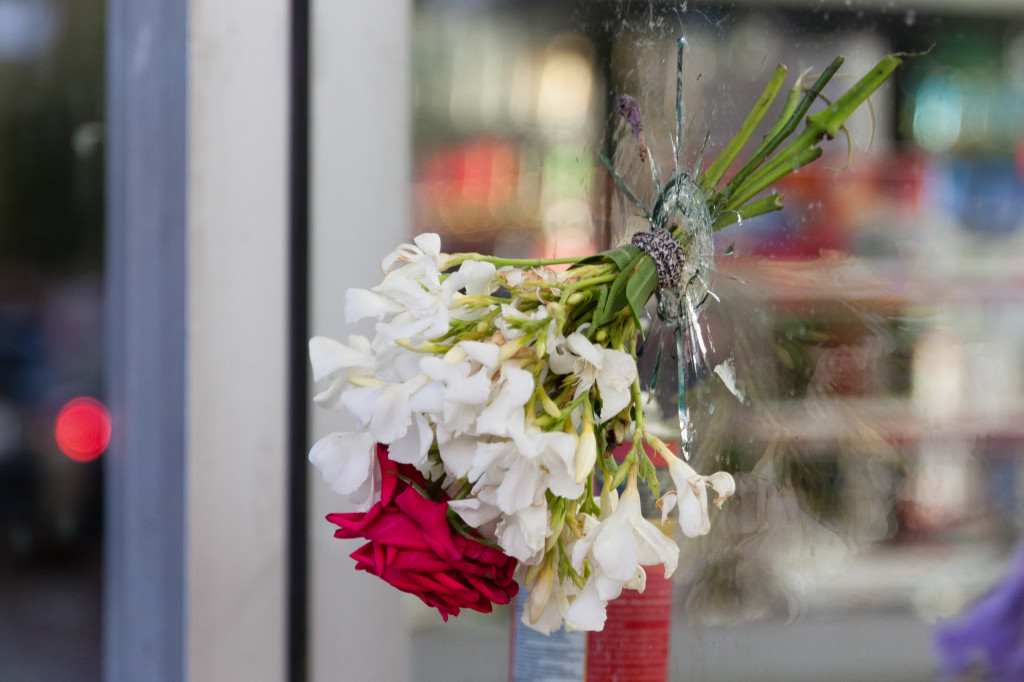 Flowers through a bullet hole in the window of I.V. Deli Mart. As the community mourns, the gun debate continues nationwide. Benjamin Pu/Daily Nexus

As Isla Vista community members begin to settle down and reflect on Friday’s tragic events, public figures and other gun control advocates and opponents have engaged in a national debate surrounding the right to own firearms versus tighter enforcement of gun regulation and gun registration background checks.

Before 22-year-old SBCC student Elliot Rodger shot, stabbed and ran over students in a massacre that killed six victims and injured 13, he was able to register and purchase three handguns — two 9mm Sig Sauer P-226s and one Glock-34 — despite reportedly having Asperger’s syndrome, receiving treatment from multiple psychiatrists and being prescribed antipsychotics. The incident has prompted state officials such as Senator Dianne Feinstein, Congresswoman Lois Capps and Assemblymember Das Williams to revisit gun safety in America, with Williams and Assemblymember Nancy Skinner recently announcing legislation to create a gun violence restraining order allowing concerned family members or friends to urge law enforcement to prevent a person from buying or owning firearms.

Richard Martinez, father of second year undeclared student and victim Christopher Michaels-Martinez, has been particularly vocal about the role politicians and the National Rifle Association had in his son’s death, urging students to shout “Not one more!” during yesterday’s memorial, beginning a campaign asking people to send postcards to elected officials addressing gun violence in light of Friday’s mass shooting. In a statement he made before a press conference at the Santa Barbara County Sheriff’s Office on Saturday, Martinez specified gun rights activists as the cause for Michaels-Martinez’s death.

“Why did Chris die? Chris died because of craven, irresponsible politicians and the NRA. They talk about gun rights. What about Chris’ right to live? When will this insanity stop?” Martinez said. “When will enough people say, ‘Stop this madness! We don’t have to live like this!’ Too many have died. We should say to ourselves, ‘Not one more!’”

Many public figures such as Feinstein have backed Martinez’s sentiment, arguing the NRA has prevented legislation enforcing stricter mental health background checks for obtaining guns from passing through Congress.

“Unfortunately the NRA continues to have a stranglehold on Congress, preventing even commonsense measures like universal background checks that have overwhelming support,” Feinstein said. “Americans need to rise up and say enough is enough. Until that happens, we will continue to see these devastating attacks. Shame on us for allowing this to continue.”

According to an employee who spoke on the condition of anonymity from Goleta Valley Gun and Supply — where Rodger purchased one of the guns used in the attack — in order to register for and purchase a gun, a person must have a valid California driver’s license, proof of residency and a certificate indicating they have passed a 30-question test on gun safety. After the purchaser’s personal information undergoes a criminal background check by the Department of Justice, the gun-buyer can pick up their gun 10 days after purchase.

“[Rodger] went through all of the proper channels,” the employee said. “He received the firearm legally.”

According to Kevin White, manager of shooting range and gun store B and G Guns in Oxnard — another location Rodger was said to have purchased a gun — a person cannot buy a gun if they have been committed to a mental institution. Otherwise, if the prospective buyer has a history of mental health issues but has never been institutionalized, they are free to purchase a firearm, White said.

“If you haven’t been committed and there’s never been any reported issues, then it won’t come up,” White said. “[Rodger] had a squeaky clean record. He didn’t have any history of being in a mental institution, and the Department of Justice does a pretty thorough background check on you.”

White also defended firearm rights and said guns had nothing to do with the killing, claiming Rodger would have committed the murders regardless of whether or not he had owned firearms.

“If he was bent on doing something wrong and wanted to commit some atrocity, he’s gonna do it,” White said. “’Firearms’ is a hotbed term. You say ‘firearm’ then all of a sudden red flags go up and people hone in on that. Why isn’t anybody focusing in on the fact he stabbed people — killed people with a knife? Or that he was involved in a car accident?”

But according to Capps, the recent massacre is plenty reason to push for universal background checks, limits on high-capacity magazines, increased school safety and stronger gun trafficking penalties.

“Gun safety and the Second Amendment are not mutually exclusive,” Capps said. “I agree that responsible, law-abiding Americans have the right to own a gun, but each of us also deserve to feel safe in our homes and communities. This is the least we can do.”

Yesterday, Assemblymember Williams proposed a gun violence restraining order in the state legislature which would grant authority to concerned family members, friends and intimate partners to intervene and possibly prohibit the purchase of firearms or remove firearms already in possession of a person suspected of mental instability. According to Williams, the most important element of the retraining order is that it places an individual on the notification of Department of Justice, making it a crime for that person to buy a weapon.

“If they went to try to buy guns they would be prevented from buying guns by the DOJ list,” Williams said. “Even if that somehow slipped through it would be a crime after the fact that the law enforcement would go investigate.”

Williams said this legislation has not only come in light of recent events but is also a response to a long history of violent school shootings that have prompted fruitless statements for tighter gun laws from the White House.

“There is not enough being done,” Williams said. “The president was right to initiate strong legislation, and Congress rebuffed him. I agree with Mr. Michaels-Martinez that this … is a real problem.”

According to Martinez, pushing for strong gun control legislation is a universal problem because the Isla Vista shootings could have happened anywhere, to anyone.

“Our family has a message for every parent out there,” Martinez said. “You don’t think it’ll happen to your child until it does.”

A version of this story appeared on page 3 of Wednesday, May 28 2014 print edition of the Daily Nexus.

I would love to hear the medical and psychiatric crowd weigh in on what diagnosis or meds would make a person “unsuitable” to own or posses a weapon. And how would one enforce that? HIPPA prevents heaps of stuff from being disclosed. How would a gun dealer know they were dealing with a possible freak?

“despite reportedly having Asperger’s syndrome, receiving treatment from multiple psychiatrists and being prescribed antipsychotics.”

“Many public figures such as Feinstein have backed Martinez’s sentiment, arguing the NRA has prevented legislation enforcing stricter mental health background checks for obtaining guns from passing through Congress.” Well, first of all, this happened in California, which, for the last 35 years, has passed every single proposed gun control law that has come along, including mandatory universal background checks, strict limits on how often one may purchase a gun, gun registration, magazine bans, mandatory waiting periods, limited brands and models of guns (the “safe handgun roster”, broader categories of prohibited persons, etc., all of which the killer obeyed. So… Read more »

Australia bans firearms. Every week, innocents are STILL gunned down. Criminals are called THAT because they do NOT FOLLOW laws.

There IS a war outside our homes. To paraphrase, do NOT bring a “gun ban legislation to a gunfight”.

If you don’t want to die, PROTECT yourself. If you DON’T, it is YOUR FAULT.