The Daily Nexus
News
Administrators, Politicians Respond to Isla Vista Tragedy
May 26, 2014 at 5:13 am by Aditya Tadanki and David Jackson 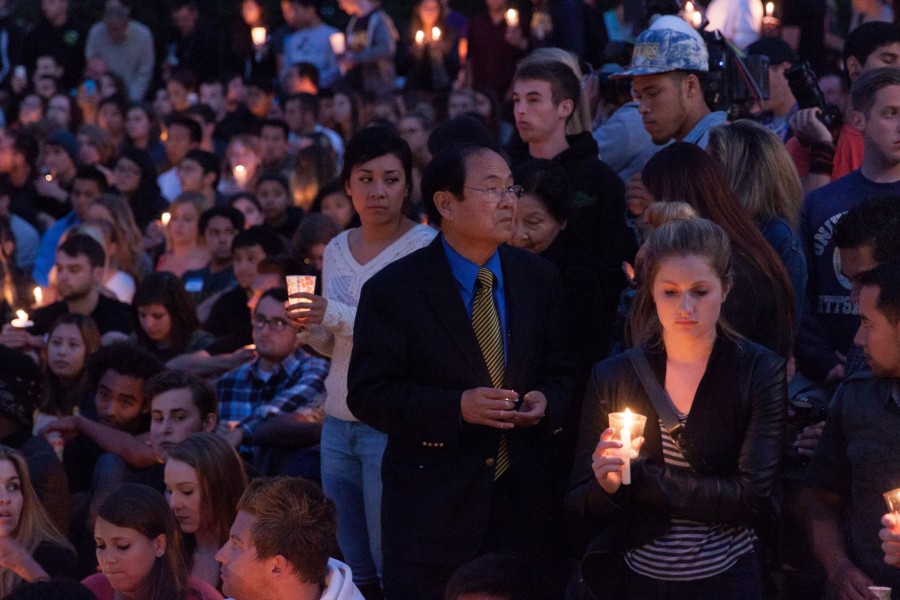 Chancellor Yang spoke at the candlelightVigil, urging students to seek help and to stand strong with the rest of the members of the Isla Vista and UCSB community. (Daily Nexus / Benjamin Pu)

Politicians, university administrators and community leaders spoke out in the wake of last Friday’s mass murder in Isla Vista, condemning the senseless violence, mourning or reaching out to victims and in some cases, pushing for tighter gun control.

UC President Janet Napolitano, Chancellor Henry T. Yang, 24th District Congresswoman Lois Capps and Senator Dianne Feinstein were among the public officials who released statements regarding the killings. UCSB administration promised the campus community that the university will take on more campus counselors in coming weeks and that a memorial fund will be established to honor the victims.

In a statement released Sunday, Yang announced that Tuesday’s classes will be cancelled to allow students more time to recover from the weekend’s tragedy. Instead, a memorial service will be held at 4 p.m. in Harder Stadium, and Yang asked faculty to make themselves available on campus to students who want to meet with them.

Yang said UCSB will draw on personnel and resources from other UC campuses to make counseling services more available to students.

“I spoke to President Napolitano this morning and she has offered help from the entire UC system,” Yang said at the candlelight vigil held Saturday. “Berkeley and some other campuses are on break already, so they [will] send their counselors to our campus to help us, along with some other help as well.”

Napolitano said steps were being taken to increase on-campus resources for those affected by the violence.

“University officials have set up a room for families who are coming to campus, and are making counseling services available to any students, faculty and staff who need our support,” Napolitano said. “UC Santa Barbara officials are also working with the local County Sheriff’s Office and have opened the campus’s Emergency Operations Center.”

Capps said a strong sense of community is crucial to beginning the recovery process.

“We’ve endured too many tragedies as a nation over the past few years. But now is a time for us to pray and to come together as a community,” Capps said in a statement. “May God bless the memory of these victims, give strength to those who were injured, and support all who are touched by this unconscionable act.”

Governor Jerry Brown commented in a brief statement expressing his condolences for all those affected by the weekend’s tragedy.

“Anne and I were saddened to learn of this senseless tragedy,” Brown said. “Our thoughts and prayers go out to those mourning the loss of their loved ones during this difficult time.”

Feinstein said the fact that shooter Elliot Rodger was able to purchase multiple handguns despite a history of mental instability serves as a stark reminder that there needs to be further limits to who can buy guns.

“We must ask ourselves if an individual whose family called police with concerns about mental health, who is receiving therapy and who has had several run-ins with police should be allowed to own multiple firearms and hundreds of rounds of ammunition,” Feinstein said. “When anyone, no matter their mental health or history, can so easily obtain any gun they want and as many as they want — we must recognize there is a problem.”

“Unfortunately the NRA continues to have a stranglehold on Congress, preventing even commonsense measures like universal background checks that have overwhelming support,” Feinstein said. “Shame on us for allowing this to continue.”
Isla Vista Church pastor Jason Lomelino said church members were available to talk to students throughout the weekend at the ministry house at 6686 Del Playa.
“This is our city, and we are heartbroken by the tragedy that took place on our streets,” Lomelino said. “We are there to minister to them in whatever way they need.”

Brittany Tholan contributed to this article.

So sorry all this happened but I hope this will be a wake up call to everyone to treat each other better…I’ve lived all over the USA and the way women treat guys here in santa Barbara county and the way people treat people in general is awful. There are good people out here obviously but I have been hurt by the way people treated me out here like many others. Too many people judging just on looks not who a person is. Too many people not thinking how their actions or rejecting others hurt others. I’m good to people… Read more »

‘We’ve endured too many tragedies as a nation over the past few years. But now is a time for us to pray and to come together as a community,” Capps said in a statement. “May God bless the memory of these victims, give strength to those who were injured, and support all who are touched by this unconscionable act.”’

Lois has regularly voted for military appropriation bills funding mayhem and destruction in the Middle East.

As Stalin once observed: When one person dies, it’s a tragedy. When 10,000 die, it’s a statistic