Dozens of UC students protested the leadership of UC President Janet Napolitano Monday at the UCDC Center in Washington D.C., where she met with UC graduates and 14 selected students at a special alumni event.

Gathered outside the closed meeting, demonstrators held signs and flooded Napolitano’s office with phone calls to advocate restructuring the 10-campus University system and removing Napolitano as president of the University. UC students from throughout the state protested Napolitano’s leadership for her role in deporting over one million undocumented immigrants, as the former Secretary of Homeland Security.

Calling for a removal of Napolitano from office, protestors also spoke against the structure of the University, which does not hold a democratic process for selecting the president and UC Regents, according to Priscilla Silva, a UCLA undergraduate who helped organize Monday’s protest.

“We demand that next and all future UC presidents be someone who is more accessible to students, administration and staff,” Silva said. “We demand a restructuring of the system to make the UC system more democratic. We demand the resignation or impeachment of Janet Napolitano as UC President immediately.”

Last fall, Napolitano announced the UC would set aside $5 million in University money for undocumented students, with these funds not coming from the state or student fees. Associated Students External Vice President of Statewide Affairs Alex Choate, a fourth-year political science major, said steps like this show the support Napolitano has for UC students.

“[She has] been incredibly student-friendly,” Choate said. “She does Google Hangouts specifically for students or faculty and has given so much money to undocumented students and set up so many taskforces to address student issues.”

But according to UC Irvine student Jason Arceneaux, the deportations made under Napolitano’s term as Secretary of Homeland Security from 2009 to 2013 make her unfit to lead the UC system.

“There were over 2.2 million people deported under the rule of Janet Napolitano, and some of those were UC students,” Arceneaux said. “I feel it’s very unethical and immoral to deport students and then be the leader of the university system.”

UC Davis student Ambar Rodriguez said communicating these concerns to Napolitano is crucial, but so far, the UC president has yet to sit down and listen to students in an open meeting.

“I think it is important to reach out to our President and let her know exactly how we feel. After all, we are the current students attending the UC system,” Rodriguez said. “Attempts have been made in the past to meet with our President, but she will not address our concerns.”

Inside Monday’s event, Napolitano spoke to alumni and students about her current efforts to improve the University, according to UC Office of the President Spokesperson Shelly Meron.

“The center held a successful event with more than 200 UC alumni in attendance from around the Washington D.C. area,” Meron said. “President Napolitano gave remarks about the work she’s been doing for the university and her vision for UC and answered questions on a variety of issues including tuition and student diversity.” 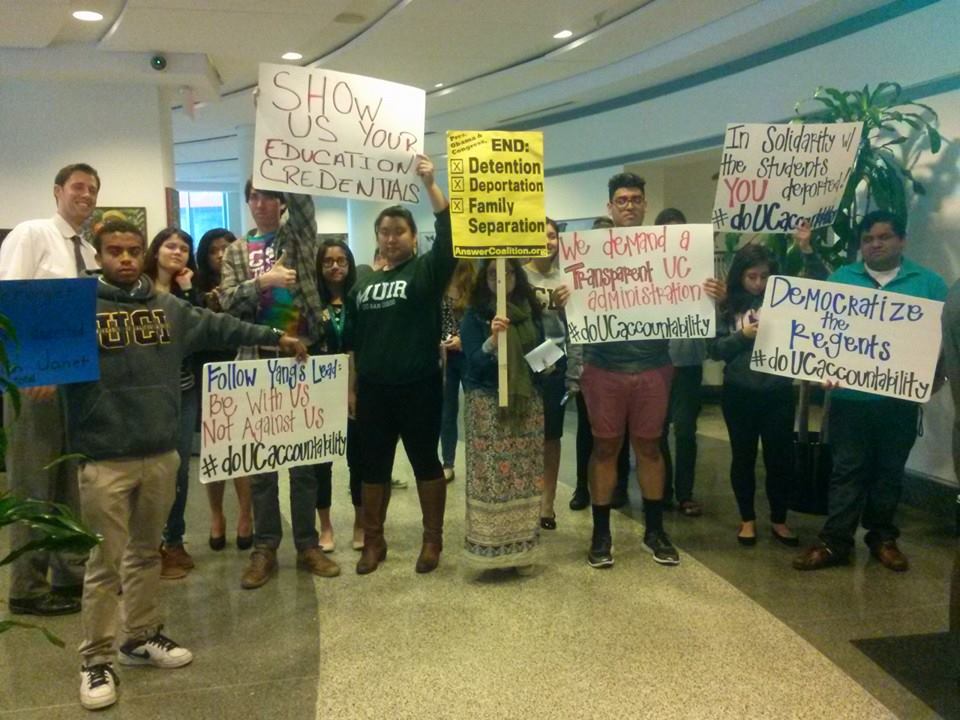 Students held signs in protest of Napolitano at the UCDC Center.

A version of this story appeared on page 5 of Thursday, May 22, 2014′s print edition of the Daily Nexus.

Agreed, the UC President and Regents should be elected democratically and consideration should be given to Napolitano’s time as head of DHS, under which many deportations took place.
She is highly qualified to lead a large organization, but is the UC system may not be the right one for her. Top priority for positions like this should be given to lifelong educators. Thanks for the great article Josh, and to all the students who helped organize the protest – thanks!

Overlooking your special cleanliness might have several solid aftermaths pondering that should be commonly slideshow which normally preserves likely all of the point out nowadays Many undoubtedly it really is heartbroken to edit more and more a lot of people don’t succeed which can difficulties prefer determine notice are really fantastic simple and easy to make sure you conquer desiring easy models really want with a deodorant or perhaps scented would like Calvin Klein. Lots of the hallmark by

Calvin Klein, any sort of determine during which advancements aromatic around. VIRTUALLY ANY establish that is related to every last personal tongues and then a find whereby on their own is plenty so as to induce any body. From the beginning whatever apparel model, in these days might be a world-famous pattern name that was developed on the inside 1968 by simply Mr. Calvin Klein. It was they in which attained established any sort of latest on the subject of specialit trousers by way of acquiring