The Daily Nexus
News
Lecture Discusses Ethnic Issues in Penal System
May 21, 2014 at 5:00 am by Emani Oakley

Associate professor of history at UCLA Kelly Lytle Hernandez gave a presentation tracing the history and reasons behind the mass incarceration of people of Mexican descent in the United States last night at the MultiCultural Center lounge.
During the talk, titled “Caged Birds: The Rebirth of Mexican Incarceration in the United States,” Hernandez spoke on the rise of Mexican imprisonment in United States during the 1920s and 1930s. She also discussed the “highly racialized and institutional nature” of mass incarceration, saying during the lecture that “black and brown men” make up roughly 70 percent of the state prison population in California.
According to Hernandez, when historians refer to mass incarceration, they are usually referring to the imprisonment of African Americans in the 1980s. However, she said there is a lack of information concerning the mass imprisonment of Mexican Americans and undocumented Mexican immigrants in the United States.
“Unfortunately, we do not have similarly rich conceptual empirical understandings of when, where, and why Mexicans emerged as the primary subjects of imprisonment in the United States,” Hernandez said. “By tracking the history that came between the days of conquest and the precipice of our present, I hope to illuminate one of the forgotten roads by which we arrive at mass imprisonment today.”
Hernandez said the source of imprisonment was overwhelmingly affected by two sets of laws: immigration law and public order charges.
“Although there is much that sets immigration law apart from public order charges, they share the function of restricting a person’s right to live within a given jurisdiction,” Hernandez said. “Immigration law, of course, limits the ways in which a non-citizen can enter and remain within the United States. Public order charges restrict how any person can inhabit public space and systematically target the unemployed and the poorly sheltered.”
Hernandez also said that by the 1920s, mass migration had matured and tensions against immigration increased at the same time as the rise of both the Ku Klux Klan and eugenics ideology, as demonstrated by the efforts of opponents of Mexican immigration to propose legislation that would restrict immigration into the U.S.
“Mexican immigration in the 1920s survives this era of incredible immigration restriction upon the belief and the promise that Mexicans would never remain north of the boarder and never become US citizens,” Hernandez said.
According to Hernandez, the Immigration Act of March 4, 1929 dramatically increased the number of incarcerated Mexican immigrants in the United States.
“With stunning precision, the criminalization of unlawful entry caged thousands of Mexico’s proverbial birds of passage,” Hernandez said. “By the end of the year, it prosecuted over 44,000 cases of unlawful entry. No federal law sent more Mexicans to prison than this in the 1930s.”
Hernandez said the Immigration Act of 1929 continues to have enduring negative effects on Mexicans in America today, with unlawful entry being one of the leading causes of Mexican imprisonment.
“The drug war is no longer the leading cause of mass incarceration within the federal prison system — immigration control is,” Hernandez said. “Therefore, mass imprisonment today is expanding on the bedrock of a partial compromise made over the question of Mexican immigration during the 1920s.”
According to Zaveeni Khan-Marcus, director of the MCC, mass incarceration is a major issue affecting “communities of color.”
“It’s a system that’s based on institutional racism towards people of color so I think it’s really important to increase awareness and consciousness about this situation,” Khan-Marcus said. “It’s a very important issue, and it has to do with inequality.”
Khan-Marcus said it is important students are aware of institutional inequalities related to race in order to determine solutions for such issues.
“So many black and brown men are in prison, and there has to be a reason for it,” Khan-Marcus said. “It’s so important for young people to be aware of it and do something about it and change it because it’s going back to slavery… It’s the same concept.”
Ana Elizondo, third-year sociology and Spanish double major, said mass incarceration is something not normally discussed and the talk fit well into the context of a sociology class she is currently in.
“It’s something that not many people are informed about and even learning this in class, [the speaker] said lots of things I had no idea about,” Elizondo said. “We have so much power that we just need to be informed about things going on in the United States and around the world so that we can take a stance on it.”
According to Elizondo, mass incarceration is something personally difficult for her to deal with due to her Mexican heritage.
“It’s very good for us to be informed about and for us to know,” Elizondo said. “Not many things are being done to stop it, so I feel that that’s what needs to be done — things like rallies and protests to stop mass incarceration because it’s something that is only going to continue going on if we don’t put a stop to it.” 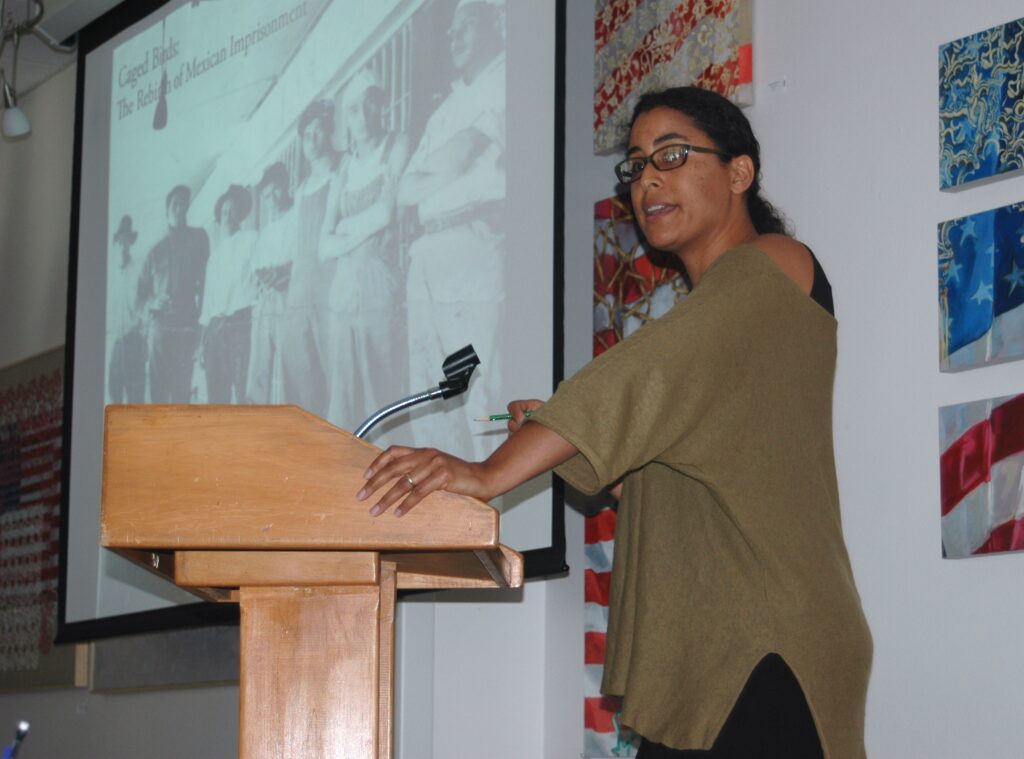 Associate Professor of history at UCLA, Kelly Lytle Hernandez addresses the audience. On Tuesday, Hernandez gave a lecture titled “Caged Birds: The Rebirth of Mexican Incarceration in the United States.”

A version of this story appeared on page 1 of Wednesday, May 21, 2014’s print edition of the Daily Nexus.