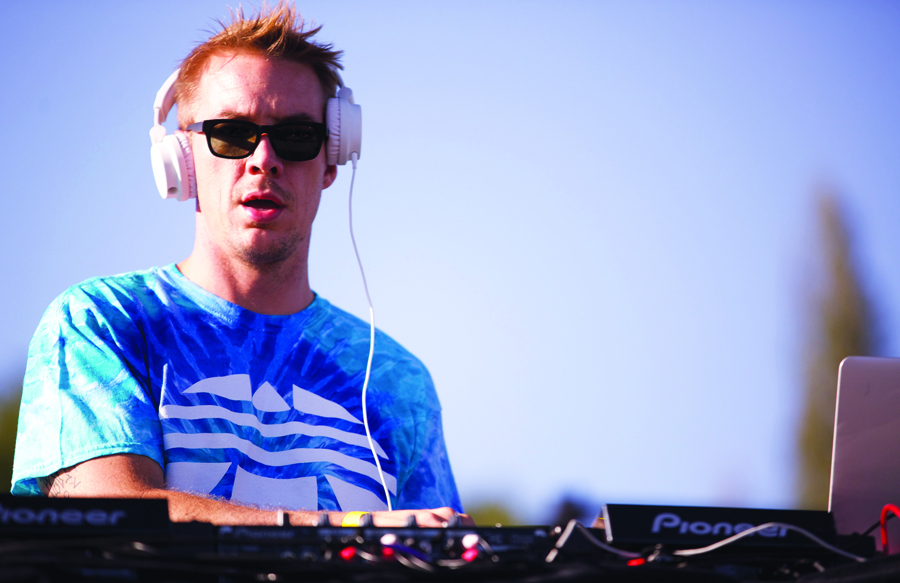 Thousands of students got on their knees for Diplo yesterday at the 36th annual Extravaganza music festival at Harder Stadium.

A Los Angeles-based DJ and the headliner of yesterday’s festival, Diplo softened the music during one of his last songs and told the audience to crouch in the grass. Diplo waited as the field leveled and then dropped an explosive beat to the crowd. Hosted by the Associated Students Program Board, the free event also featured Local Natives, Chance the Rapper and Jhené Aiko. UCSB Battle of the Bands winner Yancellor Chang, and UCSB Battle of the DJs winner T-Fresh performed as well.

As for the other performers, Local Natives, an indie-rock band from Los Angeles, featured songs from their latest album Hummingbird and their 2010 album Gorilla Manor.

Prior to their performance, Chicago hip-hop artist Chance the Rapper made an appearance on stage, despite rumors of being too sick to attend. Chance performed pieces from his mixed tape Acid Rap, which went double platinum in 2013 after over 500,000 downloads.

“He was just going crazy, dancing everywhere, getting the crowd involved,” Larrieu said. “He sounds live exactly like he does in his recordings — or better.”

Larrieu, who also attended last year’s Extravaganza, said he feels this year’s artists did a better job and the audience appeared to be having more fun than in years past.

“At a certain point, my friend got up on my other friend’s shoulders and took a picture going back looking toward the crowd,” Happ said. “He showed it to us and he was like, ‘Guys, look how huge this freakin’ crowd is.’ It was giant.”

Like Larrieu, Happ said she felt that the audience seemed to enjoy themselves and that the event carried a friendly and cheerful atmosphere.

“Everyone and everything was super happy … or it could have just been me ’cause I was on molly,” Happ said.

Wow, quoting a student saying “’cause I was on molly” real classy nexus, really classy