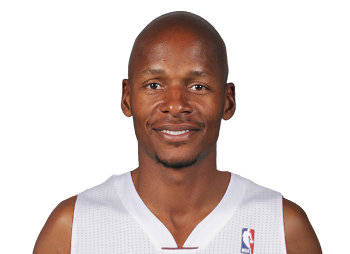 These achievements complete the profile of a player that many would guess is retired and on his way to the Naismith Hall of Fame.

And while he is headed to the Hall eventually, Ray Allen is still playing. And not only is he playing at 38 years old, but he’s playing a big role for the Miami Heat.

This summer, Allen will turn 39 and complete his 19th year in the NBA. He currently stands the fourth oldest active player in the league, with only Steve Nash, Derek Fisher and Mike James playing older. However, of these players, Allen certainly has the ability to be the biggest game-changer on his respective squad.

His three pointer against San Antonio last year during game six of the NBA finals will forever be replayed as one of the most clutch shots in the Finals.

It was certainly no fluke. Who took the shot to clinch the series versus Brooklyn in the first round just a week ago? Not the best player in the NBA right now (aka LeBron James). Not any of the Big Three. It was Allen.

Allen may come off the bench for the Heat, but he is without a doubt the best pure shooter on the team. In fact, he’s one of the best three-point shooters in league history (if not the outright best) and he knows how to make them whether there’s 30 minutes left in the game or three seconds.

That would be why Allen is the NBA’s all-time leader in career threes made, surpassing Reggie Miller in 2011. He also holds the all-time record three-point field goals made in the postseason. Name any three-point shot record? Allen either has it or is towards the top.

Over the course of his career, he’s shot 40 percent from long range and averaged 18.9 points per game.

As a terrific shooter, Allen also is the player every coach wants at the free throw line to ice the game, shooting an incredibly accurate 89.4 percent on his career.

But to still be playing and making an impact at almost 40? You wouldn’t know it by looking at him. He continues to run off of screens (like three of them are needed to get him open) and knock down open looks. He’s no longer the superstar on his team, but he’s the perfect role player to take attention off the star-packed team that includes James, Dwayne Wade and Chris Bosh.

Some would call him extraordinary. Some would just call him Ray Allen.