The Santa Barbara County Board of Supervisors commended UCSB for its handling of four meningitis cases that broke out in November, presenting the university with an honorary resolution for helping contain the deadly disease.

When four students contracted a potentially fatal strain of bacterial meningitis back in November, officials from the Centers for Disease Control and the California Department of Public Health visited the campus to measure the prevalence of the outbreak and try to contain it. As meningitis is passed through throat and respiratory secretions — killing 10 percent of its victims and leaving 20 percent with serious disability — health officials later worked with UCSB administration to provide the campus with an investigational vaccine called Bexsero, which protects against the rare B strain of meningococcal disease.

After filing an Investigational New Drug application with the Food and Drug Administration in late December, the campus began administering the vaccine in late February. UCSB Student Health has now administered 17,000 doses of the unlicensed vaccine, which is only authorized for use in Europe, Canada and Australia.

With no cases reported since the four in November, county officials are now recognizing the efforts of the university. Third District Supervisor Doreen Farr said she was impressed by the university’s quick response to the outbreak and “ability to effectively collaborate” with other officials.

“It was an honor to sponsor this resolution, as UCSB is certainly deserving of recognition,” Farr said in an email. “I hope other universities can learn from this successful strategy in addressing outbreaks on college campuses.”

According to Ferris, the university jumped into action and CDC officials were visiting the campus within weeks of the fourth case.

“They were interviewing us and we were hosting them and giving them all the information,” said Ferris. “It was a really fast response. We did everything we possibly could to try to slow or stop the spread of the infection.”

One of the UCSB students who contracted meningitis, freshman lacrosse player Aaron Loy, had his feet amputated as a result of complications related to the disease. First-year environmental science major Sean Harvey, who is close friends with Loy, said while the university responded well to the outbreak, the vaccine should have also been available to Santa Barbara Community College students since many of them live alongside UCSB students in the just one-half square mile of Isla Vista.

“All it takes is one person at CC to get it. They all go to school together. It could have spread easily,” Harvey said. “I know for a fact that I have a friend at CC who hung out with Aaron one of the nights he quite possibly could have gotten meningitis.”

According to Student Health, the university was legally bound from providing the vaccine to individuals beyond the targeted population outlined by the CDC. Only undergraduate students, faculty and staff who live in university-owned housing and those with specific medical conditions were considered at-risk, although the vaccine was offered to everyone on campus.

While Fleming said she was concerned about cases developing at SBCC, she said it was ultimately a CDC decision. She also said the university’s handling of the outbreak can serve as a precedent for containing future disease outbreaks at other college campuses. After working with health officials for months and even obtaining a foreign vaccine for the campus, university health representatives are now being asked to speak at conferences and panels about the outbreak, Fleming said.

“I feel we’re prepared to deal with just about anything,” Fleming said. “This was a great opportunity to sort of test how responsive we can be and I think we did really well.”

At Princeton University, nine meningitis cases arose over the past few months, including one student at Drexel University in Philadelphia dying as a result of this outbreak. While Princeton had a different meningitis outbreak, it administered the same vaccine as UCSB and over 5,000 students — or about 95 percent of those offered the shot — received it. With UCSB giving out over 17,000 doses, Fleming said the university managed to reach new heights in vaccination administration.

“The fact that we gave out 17,000-plus immunizations really hadn’t been done anywhere on a scale that big, so I think it was a pretty impressive effort,” Fleming said.

According to Ferris, the outbreak demonstrated the campus’s newfound ability to respond to similar public health emergencies in the future.

“We’re prepared if this ever happens again, or if anything like it happens again, to jump into action and to set up vaccine clinics and to be able to handle thousands of students at a time in an efficient way,” Ferris said.

The second dose of the meningitis B vaccine will be available from Student Health on a drop-in basis tomorrow from 9 a.m. to 4 p.m. 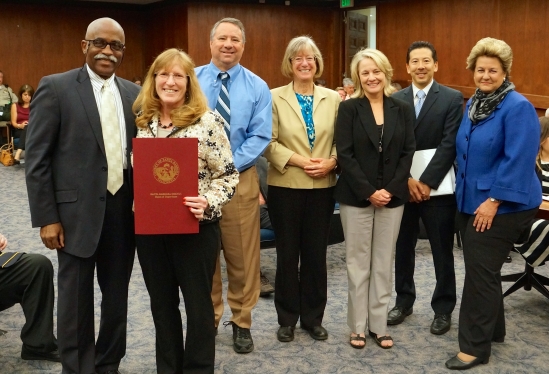 The Santa Barbara County resolution praises the handling of the meningitis outbreak earlier this year.

Photo courtesy of The Current

A version of this story appeared on page 4 of the Thursday, May 15, 2014 print edition of the Daily Nexus.

Wow, what a wonderful article. It must have taken a extensive amount of research and study to put together such a well done article. Bravo and hats off to you, Julia! :))))

What a great article, I am so glad to hear this news! The author of this article did a tremendous job finding all the facts and quotes. Overall, just a great piece of writing. My grandson attends UCSB and I am glad to hear his health is in good hands with the school.