The Daily Nexus
Regents
Fossil Free UC Protests During Regents Meeting
May 15, 2014 at 5:00 am by Daniel Slovinsky and Carissa Quiambao

Protesters shouted phrases such as “We need a task force now!” and “Invest in education, not climate change!” to urge the Regents and other University officials to halt investments in the top 194 publicly traded fossil fuel companies. FFUC was founded by UCSB and UC Berkeley students and so far, UCSB is the first and only campus to pass a resolution through their faculty governing body, the Academic Senate, calling for the UC to pass this divestment resolution.

While the Regents granted speakers an extra 10 minutes during the meeting’s public forum, the demonstrators continued chanting slogans and interrupting the meeting throughout the day.

San Francisco State University student and FFUC member Jason Schwartz, who traveled from San Francisco to speak at the Sacramento meeting, said ignoring climate change will have disastrous consequences for the future environment of the world.

“We do not have time to wait for even more catastrophic events to occur to spur us to action,” Schwartz said. “At that point, it will be too late.”

According to UCSB sociology professor John Foran, also a member of FFUC, UC campuses and other prestigious universities across the nation should divest from fossil fuel companies since the caliber of these institutions would help swing the tide against such environmentally harmful companies.

“Harvard has done this, and we’ve been quite inspired by what they’ve written. If a place like Harvard … and a UC school were to do this, that would be big news,” Foran said. “In the coming years, Regents are going to hear us more and more … I really think all our arguments will be so compelling, they’ll do the right thing.”

Later in the meeting, during the update on the Department of Energy Laboratories, Regent and DOE Laboratory Committee Chair Norman Pattiz said that although FFUC demonstrators should “work on their method of presentation” and “narrow” their focus, their concerns are legitimate.

“I don’t think that there is a bigger problem facing humanity than climate change,” Pattiz said. “This is a valid cause to be interested in, and I would encourage us to find ways within the University community … to deal with these kinds of problems, which are monumental in scope.”

FFUC member Alicia Halpern said while she does not believe divestment alone would have a significant impact on the state of the global ecosystem, it would encourage other organizations to follow suit.

“We realize, and hope you realize too, that this action is critical because of what it symbolizes. We are here to turn the moral tide so having investments in fossil fuel companies is seen as a toxic asset,” Halpern said. “If you’re going to run the UC system like a business, we’re asking you to at least take a stand to run it like a sustainable business.” 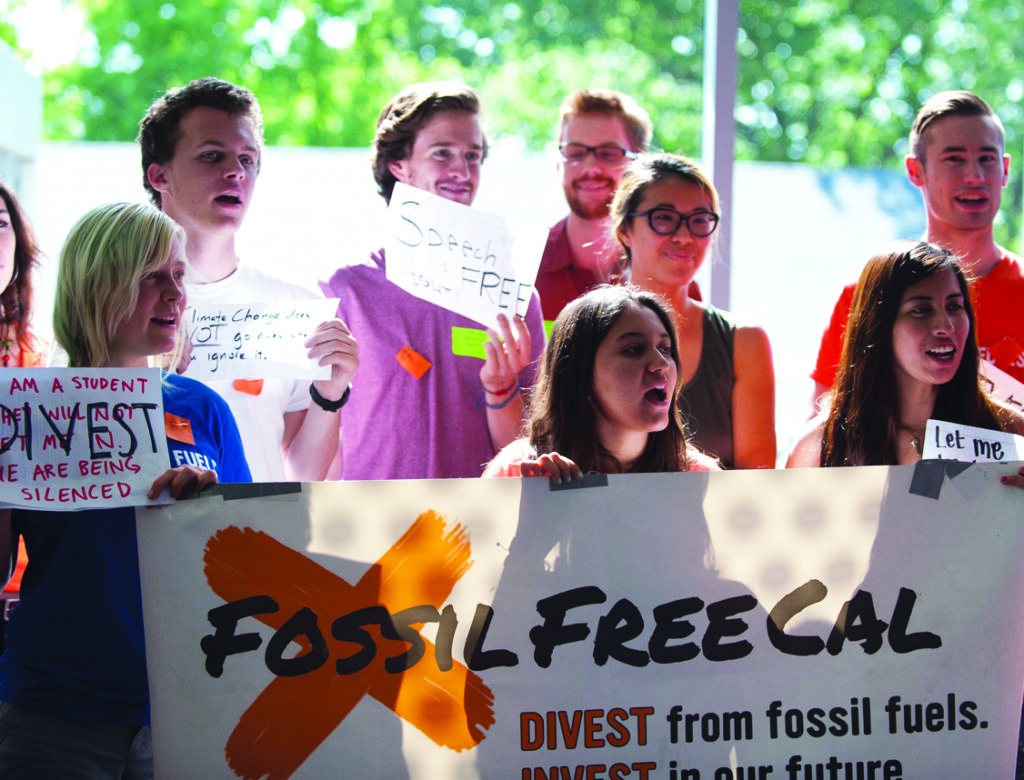 Members of Fossil Free UC set up a protest to discourage relations with fossil fuel companies at the UC Regents meeting in Sacramento. The demonstrators chanted slogans calling for a task force and interrupted the meeting throughout the day.

This article has been updated to include the identity of Alicia Halpern, who was previously only identified as a member of FFUC.

A version of this story appeared on page 4 of the Thursday, May 15, 2014 print edition of the Daily Nexus.

Hello! Thank you for this incredible article! I was one of the main organizers of the action. Alicia Halpern from uc Davis was the student who suggested the regents run the uc like a sustainable business if they are going to run it like a business.

Thank you! I’ve updated it to include her name.