The Daily Nexus
News
DOE Official Discusses Sexual Assault
May 1, 2014 at 5:00 am by Daniel Slovinsky

Assistant Secretary for Civil Rights at the U.S. Department of Education Catherine Lhamon spoke to members of UCSB administration, Associated Students executives and other selected representatives at two closed meetings yesterday in Cheadle Hall to discuss projects and ideas for combating sexual assault as part of a nationwide tour of colleges carried out by the Department of Justice.

The events are being held in recognition of the 20th anniversary of the Violence Against Women Act, and Lhamon’s visit comes two days after the first report released by a White House Task Force on College Sexual Assault — originally announced by President Barack Obama in January’s State of the Union address — called for sustained education programs, training for school officials and “interim relief” for victims of sexual assault before an investigation concludes. The 11-campus tour covers universities currently receiving one of the Office of Violence Against Women’s “Grants to Reduce Sexual Assault, Domestic Violence, Dating Violence and Stalking on Campus Program,” which are roughly $400,000 each. The meetings covered a range of topics such as programs currently in place to combat sexual violence, issues encountered in changing campus climate and a major incident of sexual assault in February.

Lhamon held two separate meetings, including one with UCSB administration and one with student leaders, in addition to a media availability session later at Mosher Alumni House. She said the purpose of the visit was to learn from the trials and errors of each campus rather than to critique or make suggestions regarding the university’s implementations of grant funds.

“I was here to listen, so both meetings were meetings in which we talked about ways that they’re using the Department of Justice Violence Against Women grant in ways I find very exciting,” Lhamon said. “We talked about students’ experiments on campus and the kinds of things they want to see more of.”

Take Back the Night Publicity Organizer Ariana Rodriguez, a third-year CCS literature major, said Lhamon was very responsive to student comments and feedback at the meetings.

“She seemed very receptive to everything everyone was saying,” Rodriguez said. “This was mainly a meeting for her to see where our campus is and the work that we’ve done, so I think this was really more in her benefit in a way.”

However, she said she disagreed with the decision to hold a closed meeting, saying the small number of students in attendance combined with the short amount of time could not accurately present the status of sexual assault prevention at UCSB.

“I was also really disappointed that it was a closed meeting. I think things like that should be town forums or town halls for all students, because we can’t represent every student that has had an incident in Isla Vista. … It was kind of exclusive in a way,” Rodriguez said. “But I think it needs to be an ongoing conversation and not a one-time meeting. 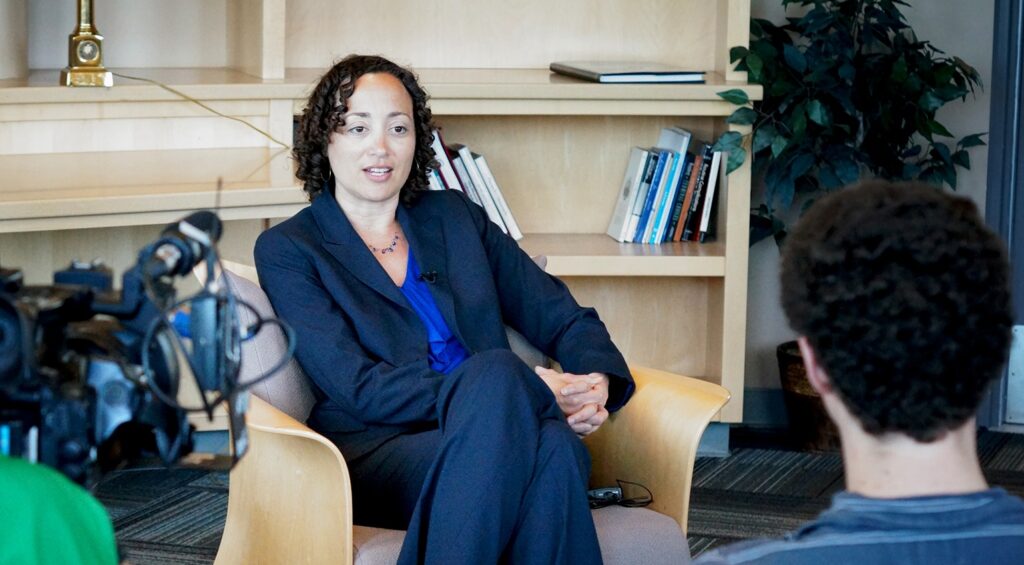 Catherine Lhamon held a media availability after her meeting with student leaders on sexual assault.

A version of this article appeared in the Thursday, May 2 edition of the Daily Nexus.