The festival concludes EAB’s Dr. Seuss-themed Earth Week, in which organizers held a free event every day leading up to Earth Day in order to encourage student involvement in environmental activities. Coinciding with alumni weekend, the event welcomed visiting UCSB alumni and current I.V. residents to dance to music provided by local bands, the Olés and Platform Holly, while learning about pressing environmental concerns on both the local and global scale.

Second-year math and art double major and Earth Day Co-Coordinator Samantha Carr said she was pleased with the high number of people who attended the festival, saying the set-up of the event may have contributed to this.

“We put the stage in a different spot this year, and I think it created a really warming environment where people felt that they could stay for longer,” Carr said. “There’s a lot more people than last year — really great turnout.”

Groups throughout the community and surrounding area hosted interactive tables at the event. Planned Parenthood educated visitors on overpopulation and practices of contraception, the Goleta Skateboarding Movement advocated for a community skate park and the Santa Barbara County Water Guardians pushed a petition to ban fracking in Santa Barbara County.

“We are telling people about the oil severance tax and how it could impact the university finances,” Singh said. “We’re asking people questions about oil to give them an awareness.”

Singh said they also educated attendees on the state of marijuana in our society and what effects legalization could have on the University of California system.

“Furthermore, we’ve been asking them about the state of marijuana legalization, for instance where people grow it and the revenue sources, we [as the UC], could get from legalization,” Singh said.

The Isla Vista Co-op handed out locally-grown tangerines and spoke with visitors about the benefits of sustainable and environmentally conscious foods. UCSB alumna and Outreach and Education Coordinator for the Isla Vista Food Co-op Ashley Audycki said she hoped to encourage people to think globally and act locally when shopping.

“By buying foods that are local, sold in bulk or benefit the globe, you can be a responsible consumer,” Audycki said.

Walking with and educating alongside Audycki were the Sunflower Kids, part of a program run by the Co-op to get children interested in sustainable foods early on. Audycki said the Co-op made a conscious effort to reach out to the entire population, especially children.

“I had a great time at Earth Day; yeah it was windy, but that’s just Mother Earth,” Angelus said. 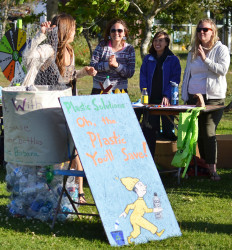 A version of this story appeared on Monday, April 28, 2014’s print edition of the Daily Nexus.