The Daily Nexus
News
Zooming In On I.V. Camera Towers
April 24, 2014 at 5:01 am by Suzanne Becker and Daniel Slovinsky

Cameras were placed for Deltopia and in light of sexual assaults

The camera towers placed along Del Playa Drive and Embarcadero Del Norte in the days leading up to Deltopia cost the University about $8,000, although a final price has not been agreed upon, and they were placed on public property and moderated by Santa Barbara County law enforcement.

Six CamGuard camera towers were temporarily placed along the two Isla Vista streets in late March and removed on April 14, lasting only about one month. According to university officials, all the camera towers for the one-month period cost at least $7,848. These costs include $4,500 for the six towers — which each was $750 monthly and includes a basic pole, five fixed cameras, local DVR recording and remote viewing — in addition to $900 for “other costs” that provide the cameras with “pan-tilt-zoom capability” and $2,448 for a fee related to transportation and installation costs, according to UCSB Spokesperson George Foulsham. The $7,848 project was paid for with “gift funds,” not student fees, Foulsham said.

The monitoring towers were requested and paid for by UCSB administration and were managed by the County Sheriff’s Office following multiple sexual assaults earlier this year, with official documents related to the project indicating that they were placed in preparation for Deltopia on April 5. The university initially rented the cameras for the period from April 2 to June 30, but took them down earlier this month.

The Santa Barbara Planning and Development Department issued UCSB a temporary four-day emergency zoning permit for the cameras on April 4, after UCSB administration requested the permit. The Planning and Development Department found the request legal under Article II Coastal Zoning Ordinance, which determines who can develop on specified land, and the Coastal Land Use Plan, which sets safety and environmental regulations for the County.

Although the permit states it is “not valid until signed by the owner/applicant and subsequently issued by the Planning and Development Department,” the cameras were installed prior to their approval date of April 4. However, Foulsham said the County Sheriff’s Office set them up early in preparation for the approval’s finalization.

“The county installed the cameras before they sent the permits to UCSB for final approval. That is why you have a photo of the cameras in I.V. before the permits were officially signed by our representatives,” Foulsham said.

The County department determined that the university’s request for the emergency permit was justified, since upcoming Deltopia events were said to be the reason for the cameras’ use.

“UC Santa Barbara Police Department and County Sheriff’s Department intend to use real time surveillance to act on crowd sizes, observable crimes and the ability to deter crime activity by monitoring events on Del Playa Drive as well as Embarcadero Del Mar during the event known as ‘Deltopia,’” the permit stated. “The areas under observance have historically been areas where violent crime and aggravated assault tend to occur.”

The Department determined that the short amount of time before Deltopia justified the lack of public comment, which is normally required for such requests.

“Due to the sensitive nature of the installation of the temporary security cameras and lights, time does not allow for public comment on the Emergency Permit itself since immediate action is warranted to reduce the risk to life and property,” the permit stated.

Foulsham said an initial estimate cost of $16,200 was a “not-to-exceed” price for the time between April 2 and June 30, which is how long the university initially planned on keeping the cameras up for. He said this total cost will be reduced because of the cameras’ early removal.

The following documents were obtained by The Daily Nexus. 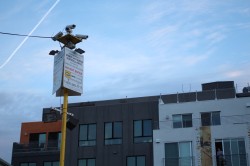 A version of this story appeared on page 3 of Thursday, April 24, 2014’s print edition of the Daily Nexus.

Thanks to the Nexus for the story!

I read the emergency permit and something struck me as weird-how did the cops know there was going to be an “illegal assembly” because of “riotous behavior” BEFORE Deltopia?

The permit was signed off by the County on April 4th, one day before Deltopia. The permit talks about violent crime and such, and then goes on to discuss Deltopia. It specifically talks about “illegal assembly” and “riotous behavior.”

Did the cops plan to provoke a riot on DP?

I think that they had a hunch that something would happen due to the rise in violent crime this year, and the fact that there was a small riot only a few weeks prior, and because Deltopia got out of hand last year and 5k-10k mor people were expected to show up this year.

Chris-that’s not what the permit says. Read it. It’s linked to the story. It’s “Zoning Permit…”

It says specifically that Deltopia was declared an “illegal assembly” because of “riotous behavior” by participants. The permit does not mention the incident two weeks earlier. Was last year’s party declared an illegal assembly? As far as I know it was not.