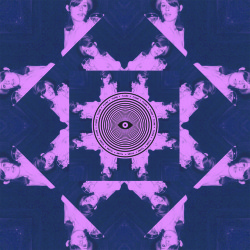 From playing Coachella on Friday to playing Casa De La Raza here in Santa Barbara on Sunday, Flume’s captivating beats gave a whole new meaning to Easter Sunday (or 4/20, whichever you chose to celebrate). Flume, the stage name for Australian electronic musician Harley Edward Streten, is probably one of the least well-known famous artists in electronic music right now. Mostly everyone can recognize one of his many irresistible head-bopping songs, but not a lot can identify his name.

I’m not sure how he landed a gig at the worn-down venue in downtown Santa Barbara after playing one of the largest musical festivals in the United States, but considering the small size of the place and how close I got to the stage, I really can’t complain. The sold out show filled the scene with hundreds of young adults from the area, and the high-school-auditorium-like venue was packed from wall to wall with people.

Considering the combination of the popular unofficial holiday of 4/20 with the vibrant sounds of Flume’s unmistakable lush melodies and processed layers, it is safe to say that a steady amount of marijuana smoke filled the air of the crowded venue during the entirety of the show. Numerous times, security guards grabbed hold of persons with joints in-between their fingers and placed them neatly on the sidewalk outside.

Although the doors opened at 9:30 p.m., Flume did not appear on the stage until around 11 p.m. While waiting, everyone was a little uneasy as people were standing shoulder-to-shoulder, sweating through their clothes due to the large amounts of body heat. Once the show started, however, everyone’s eyes were focused on the tall male standing behind the table with the MacBook, synthesizers and drum machines. As loud screams and voices echoed through the building, the familiar melody of “Drop the Game” blasted through the speakers. The crowd hummed along, and the concert had officially begun.

Flume played many songs from his self-titled album, including popular hits “Holdin’ On,” “Insane” and “On Top.” The crowd was going crazy, with many people holding their phones in the air to record the experience. The mesmerizing sounds mixed with a colorful light show and the animated square screen that lit up behind Flume was responsive to the music, with colors and images matching the moods of the songs.

I was pleasantly surprised by Flume’s remix of Major Lazor’s popular “Get Free,” in which the familiar lyrics of “Look at me, I just can’t believe what they’ve done to me, we can never get free, I just wanna be” were followed up with a lively dubstep breakdown. Additionally, Flume incorporated a remix of Lorde’s “Tennis Court.” The combination of some of his originals with remixes of recognizable songs surprised me and deviated from the expectations that I had for the show. Flume never disappoints and definitely knows how to keep his audience on their toes.

Before I knew it, Flume announced his final song: the favored and well-known remix of Disclosure’s “You & Me.” Accompanied with the just-released music video of a couple passionately kissing on the screen behind him, Flume unquestionably saved the best for last. The crowd cheered harder and more enthusiastically than it had before, and during the entirety of the song it seemed as if everyone amongst me was put in a trance by the stunning noises, vibrations and voices that reverberated off the walls.

Flume signed off with a loud, “Happy 4/20!” and left the stage. Although the crowd demanded an encore, the security guards directed everyone to leave the building. The young Australian definitely made an ordinary Easter Sunday that much more amazing.

A version of this story appeared on page 9 of Thursday, April 24, 2014′s print edition of the Daily Nexus.