The Daily Nexus
News
Well-Known Violinist Brings Bach Back to SB
April 23, 2014 at 5:00 am by Elliott Wright

Koh gained a reputation as an orchestral performer during her time playing with the Los Angeles Philharmonic, the New York Philharmonic, the BBC National Orchestra of Wales and other ensembles. She debuted “Bach and Beyond” in 2009 as a three-part recital series that features solo violin repertoire from Bach’s Six Sonatas and Partitas as well as modern-day composers and newly commissioned works.

According to a press release, Koh is known for selecting work both inspiring and challenging, winning her the International Tchaikovsky Competition, the Concert Artists Guild Competition and the Avery Fisher Career Grant.

Lisa Jaehnig, Koh’s publicist, said she created the “Bach and Beyond” series in 2009 in memory of Bach’s 325th birthday. She said it is rare for Koh to perform all three parts of the series, and Santa Barbara is one of the few places she will have done so.

“This is a way for her to do a full perspective of how Bach has influenced music since then. She has done [Parts I and II] in Santa Barbara, which is pretty rare,” Jaehnig said. “Santa Barbara might be one of the first places where she has completed the full recital series.”

According to Koh, Bach’s work is the “pinnacle of composition” in terms of solo violin and Bach’s works were not commissioned, so Bach wrote out of “pure creative need to express himself in that way.”

“‘Bach and Beyond’ came out of this idea of trying to explore what this music is and how it has influenced composers throughout history. I wanted to create a journey for my audiences with all three programs,” Koh said. “It’s a mixture of visual art, compositions spanning several centuries and finally what Bach means in the 20th and 21st centuries.”

Jaehnig said Koh’s style of playing is “intense” and “focused,” and Koh helps to bring an experience to her audience through her music.

“She is a virtuoso like many of today’s great violinists, but Jenny has a personal intensity in her playing. She is fiercely committed and laser focused,” Jaehnig said in an email. “She’s a true artist herself in that she wants to create or provide an experience.”

Dr. Charles Asche, senior lecturer of piano in the UCSB music department who performed together with Koh in Russia, said he was impressed when she won the International Tchaikovsky Competition at the age of 17.

“She was obviously a very immensely gifted and talented young violinist. Her teacher, Almita Vamos is one of the really renowned teachers in Chicago — that is where Jennifer grew up. She later entered a Tchaikovsky competition in Russia and was the highest-placing person in the competition, which was an astounding feat at this time,” Asche said.

Koh said experiencing the arts is a way of changing perspectives by opening one’s mind to experiences that don’t occur daily. She said she hopes her program will provide something more than a concert.

“I think there’s something significant about the arts. It changes your perspective. … It’s about creating a journey,” Koh said. “This recital is really about experience, and having an experience. It’s not just about going to a classical music concert. That has always been behind my philosophy on how to build a program or concert.”

Asche also said Koh exemplifies how an individual’s hard work and dedication can lead to success.

“She has a very phenomenal technique for a violinist, and she’s very impressive in concert. That’s why I think she’s been so successful,” Asche said. “The performances are very exciting and they tend to arouse the audience.” 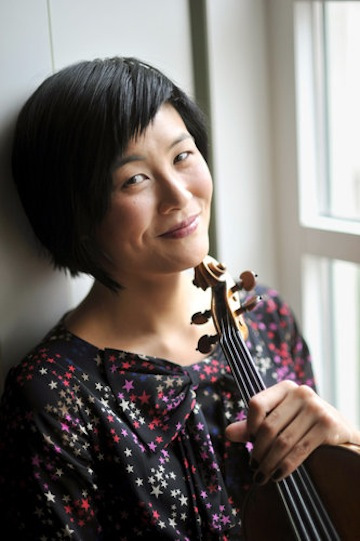 Jennifer Koh has won a variety of contests and awards, such as the Concert Artists Guild Competition, the Avery Fisher Career Grant and the Tchaikovsky Competition, which she won at the age of 17.

A version of this story appeared on page 4 of Wednesday, April 23, 2014’s print edition of the Daily Nexus.