The Daily Nexus
News
UCSB Admits Record Number of Students
April 23, 2014 at 5:00 am by Dustin Chan

The UC system was more selective and admitted more prospective first-year students than in previous years, and Latino students reflected higher admission rates than white students for the first time in the University’s history.

The University has offered Fall 2014 admission to 24,127 high school seniors, selected from a total of 66,803 applicants. UCSB plans to admit a freshman class of 4,510 for this coming fall. However, while UC application and admission numbers tend to grow year after year, the University saw a new trend in the higher number of Latino students admitted. About 29 percent of students admitted to at least one UC campus were Latino, while about 27 percent of those admitted identified as white. For this year’s accepted applicants, the average high school GPA was a 4.05 while the average SAT score was 1902.

Lisa Przekop, director of admissions at UCSB, said the standards for accepting students were the same as last year, but increases in high school student performance coupled with the overall increase in high-achieving students made it more difficult to earn a letter of admission.

The percentage of students accepted into the university declined significantly from 44 percent last year, to just 36 percent of applicants for next fall.

According to UC Office of the President Spokesperson Dianne Klein, the number of applicants to the university has been steadily rising over the years.

“This is the ninth consecutive year where the numbers have gone up,” Klein said. “It’s a testament to the academic excellence of the University of California.”

Klein said a likely reason for more students are applying to UCSB is because the UC system provides students with a valuable education at a reasonable price, relative to other colleges.

“When you compare what you get at a UC, and compare it to what you get at other public and private universities, it’s really hands-down the better value as far as academics and certainly economics,” Klein said.

“With our financial aid program, just over half of our students pay no tuition at all,” she said.

With higher minimum standards for acceptance, along with more intense competition to get into UCSB, high school students have to work harder to get into well regarded universities. Simi Kacker, a Redwood High senior recently accepted to UCSB, detailed the hectic high school schedule she maintained while working to get into quality universities.

“I was in a lot of extracurricular [clubs]. I wrote and was an editor for the school newspaper; I was in mock trial; I was part of the renewable energy club and lot of other small clubs,” Kacker said. 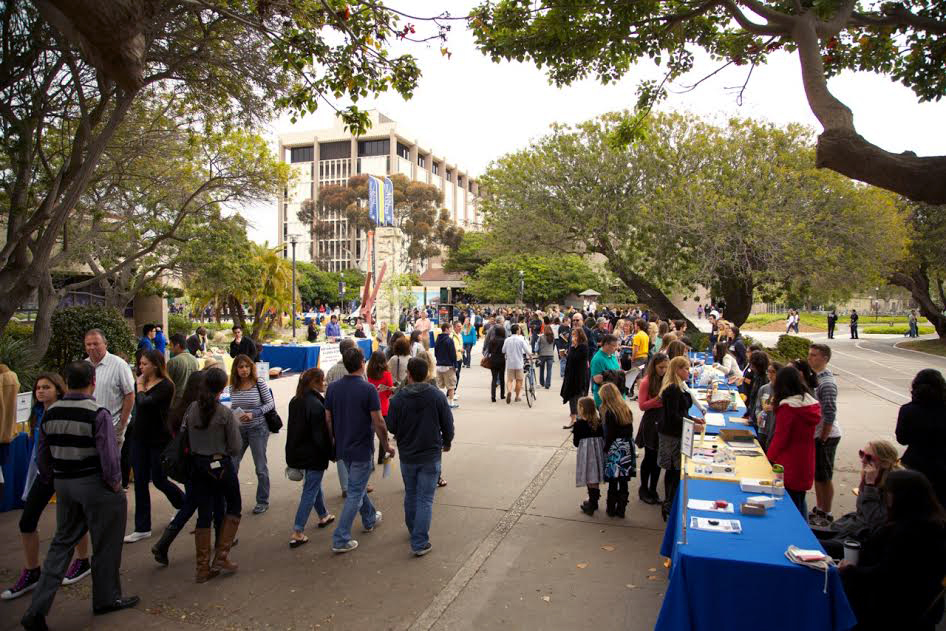 Crowds of prospective freshmen and parents examine tabling organizations. Out of 66,803 applicants, UCSB admitted 24,127 students, 4,510 of whom are expected to attend the university in the upcoming Fall.

A version of this story appeared on page 1 of Wednesday, April 23, 2014’s print edition of the Daily Nexus.