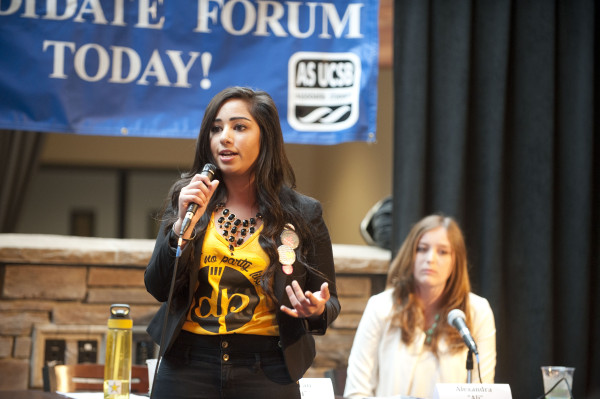 Although running unopposed, Open People’s Party’s IVP candidate Lau spent time answering audience members’ questions about her plans for the position. After Lau, OPP’s Guthy and Democratic Process Party’s Kaur spent an hour discussing topics such as campus safety, university affordability, their plans for aiding underrepresented communities at UCSB and their past experience with A.S. and other organizations.

Lau’s plans centered on increasing the visibility and transparency of the Associated Students Senate, keeping senators on track with their individual projects and creating new job opportunities for students across various majors in hopes of providing work experience for students facing a competitive job market after graduation.

With regards to creating more job opportunities for students, Lau said she would work to build more A.S. entities similar to the A.S. Bike shop but tailored to different majors. As an example, Lau said her first priority would be founding an A.S. Computer Repair shop, where students with technical skills hoping to work with computers in the future could both gain experience and earn money.

“In this economy … students who go to a four-year university are not able to get a job afterwards,” Lau said. “In the end, experience gets jobs. …What I want to do is really create more student services to create these jobs.”

When asked what Associated Students means to her, Lau said she sees the association as a means of helping students complete projects and make changes they care about.

“Associate Students is really empowering students,” Lau said. “It’s something that we use as a tool to complete things that mean something to us. …We are the future, we are students and Associated Students really gives us that avenue to feel like we can make a change on not only this campus … but also the world.”

After Lau’s forum, Kaur and Guthy took to the stage in order to answer the audience’s questions in their vie for the presidential office. Kaur has previously worked in the A.S. Office of the President, as an A.S. Senator and as co-chair of Student Commission on Racial Equality, and she currently sits on the board of the United States Student Association. Guthy is currently A.S. Letters and Science collegiate Senator and previously worked as Santa Cruz Hall President and on Community Affairs Board.

Both candidates named university affordability as their top priority, as they both said there is currently a lack of investment in higher education of the state. Both said they would work to organize lobbying efforts with state legislatures. Guthy added that she, like Lau, would work to create more job opportunities for students as a way of alleviating some of the cost, while Kaur said she would facilitate quarterly swap meets where students would be able to trade books and furniture.

As during the other forums that happened this past week, Kaur and Guthy were asked about Deltopia and their thoughts on what happened and who was responsible, in addition to how to move forward and prevent similar occurrences. Guthy said although she could not attend due to a student lobby conference in Sacramento, she felt that a lack of communication between students and law enforcement was largely responsible for the riots.

“That event shook me,” Guthy said. “I believe that the circumstances that led to the events of Deltopia primarily were miscommunications between students and law enforcement … One potential solution to this is the creation of a police advisory board.”

Kaur agreed that miscommunication greatly contributed to the proceedings, and added that there should have been a town hall beforehand to better prepare the community. Kaur also said she was wary of encouraging an increase in police presence in Isla Vista as a reaction.

One area in which the candidates did not agree involved UCSB’s membership status on the United States Student Association. According to Guthy, UCSB currently pays $10,000 per year to be a part of USSA, in addition to the $150,000 a year to be a part of University of California Student Association. A bill has recently been presented to the A.S. Senate that would withdraw from USSA on account of finances. Guthy said she felt strongly that USSA is an important organization and network for students across the nation, but she said UCSB would still be involved in USSA through its UCSA membership and did not think it was worth paying the additional $10,000 to USSA each year.

“Membership in UCSA gives us membership in USSA … so withdrawing from USSA does not mean we are not members; it means we are no longer direct members,” Guthy said.

Kaur, who sits on the Board of Directors at USSA and who has attended every USSA conference since her second year, said she believes the association has been the “most empowering organization” of her life. According to Kaur, while UCSB would still technically be involved through UCSA, it would no longer be able to send a delegation to the conference each year, and therefore she opposed withdrawing membership.

“USSA is one of the most important organizations in this nation. Student power can move mountains,” Kaur said. “As a board member of USSA, I actually have to say that even though we would be members through UCSA, there would no longer be a UCSB delegation, and that is a shame.”

When asked why each candidate chose their respective parties, Guthy said she chose OPP due to its track record of creating tangible change, citing the grants they pushed for and received for increased lighting in I.V., the expansion of campus wifi and a letter-writing campaign to legislatures lobbying to stop cuts to the state budget that drew over 11,000 letters.

“I was particularly drawn to this party because we have a history of creating tangible change on this campus that directly benefits students. … As president, I want to continue that legacy,” Guthy said.

Kaur also praised her party’s tangible accomplishments, notably the A.S. food bank, and the textbook marketplace and added that she chose DP because she saw a strong DP presence throughout the year across multiple important campus organizations.

“We are the party you will see year-round, regardless of elections. … We are the students who have been there, [who] have been at the front lines of change since day one of their experience here,” Kaur said.

“I don’t identify with a lot of communities who feel that they are underrepresented on this campus — I acknowledge this,” Guthy said. “I really want to work by collaborating with [and] working for a future that, we all as Gauchos … can all work towards. … As president I will continue my work and outreach.”

Kaur listed the several organizations she has been involved with since coming to UCSB that work to serve minority students, and said she would continue doing everything within her power to fight for the underrepresented.

“I, coming in, was struggling with my identity as an Indian woman,” Kaur said. “It really opened my eyes to how institutions in this country really oppress certain people and give privilege to others. … I continue to learn and educate myself. … I believe it begins with education.”

Both candidates closed the forum by asserting their passion and drive for the UCSB community and Associated Students. Voting begins Monday at 8 a.m. on GOLD, and the results will be announced the following Thursday at 7 p.m.