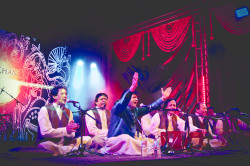 This concert was my first encounter with Qawwali music. Hearing the description, “Sufi Muslim devotional music,” I expected a mellow and meditative musicosphere that would be formal and reserved. To my pleasant surprise, the performance was anything but mellow.

The all-male Qawwali party used very loud and high vocal techniques using the chest voice — a style that reminded me of flamenco singing. This allowed for the melodies to come across very forcefully and emphatically, compelling the audience to tune in.

The rhythms of the tabla and of the lyrics were complex and exciting, with lots of syncopations, polyrhythms and fast-moving notes. The musicians were playful and joyous, bringing a musical and spiritual synergy that was unyielding.

Qawwali incorporates sections of improvisation interspersed with call and response sections. In combination with the clapping, this structure lends itself well to audience participation. The attendees at Campbell Hall joined in on the clapping as well as in some of the call and response interplay with Asif Ali Khan. By the end of the concert, many people were also dancing, which was surprising to me, given my preconceived idea of what the concert might be like.

Historically, Qawwali is a genre of Sufi Muslim devotional music from the countries of India, Pakistan and Bangladesh. Asif Ali Khan and party are from Pakistan and sing many of their songs in the native language of Urdu. Qawwali goes back as far as the 8th century.

Musicians who perform Qawwali are called Qawwals, and there are usually eight or nine Qawwals in a party. The group will feature a lead singer, which, in this case, was Asif Ali Khan. The lead singer is accompanied by a percussionist that plays tabla or dholak, one or two side singers and a few chorus singers that also clap to enhance the rhythm. A Qawwali party will also include one or two harmoniums, played by either the main singer or a side singer.

Asif Ali Khan’s improvisation and singing were masterful. His body seemed a mere vessel for a connection with the divine through the bond of music. The gestures he made with his hands, body and face were perfect visual representations of the movement of the music.

During his improvisations, he conveyed so much energetic passion and excitement through his body language, as well as through his artful melodic expressions. He seemed to be riding a wave of divine inspiration, discovering at each moment the sublime and instantaneous beauty of music. There is no way that this could be understood fully without having seen this music live. His musical ability and vibrancy were, all in all, bewildering. It was a memorable evening to say the least.

A version of this story appeared on page 9 of Thursday, April 10, 2014′s print edition of the Daily Nexus.