While 91 percent of the citations and arrests made during Saturday’s Deltopia riot did not involve UCSB students, the campus has received waves of negative media attention in the past week, causing members of the Isla Vista community to come together yesterday at Del Playa Park to discuss possible solutions to problems highlighted by Saturday’s unrest.

Osaki opened the discussion with a number of demands from community leaders that she thought might contribute to a healthier environment for future events.

“In my opinion, the things we want are pretty simple. We want the right to listen to music from our homes, we want the full support and communication from the police for future events and we want the local newspapers to hear about how we actively make change to our neighborhood,” Osaki said.

While most of those arrested were not from Isla Vista, Osaki said the community must take responsibility for the destruction caused by Deltopia, considering many partygoers were invited by UCSB students. After inviting people to previous Deltopia events, Osaki said she realized she had more fun when spending time with her local friends than with out-of-towners.

“Junior year, I realized that I didn’t really want to invite anybody, and senior year — same thing,” Osaki said. “As you get older, you start realizing that your attention needs to go internally to the people around you. You don’t need to bring in all the fun: The fun’s right here.”

Santa Barbara County Fire Station 17 Captain Mark Johnson, who was joined by several other members of the local fire station, spoke about his history serving Isla Vista since 1987 and said he was proud to see students making an effort to improve their community rather than allowing the status quo to continue.

“There are so many things that we deal with every week out here, not just Deltopia, but a lot of kids struggle, whether it’s with alcohol and drug abuse or whatever,” Johnson said. “And oftentimes, those little windows open where you can speak into their lives and try to get them back on track a little bit. And that’s what I see you guys doing here tonight … That inspires me.”

However, Garrett Gerstenberger, UCSB alumnus and owner of Isla Vista Screen Printing and Embroidery, said he was disappointed with the wider community’s ambivalence toward Deltopia’s aftermath and inability to come up with constructive solutions.

“When push comes to shove, where’s the action?” he asked. “I’m so glad that all of you could come out today, but you know, I expected coming here on my longboard from work that we were going to have over 100 people. How many people do we have here at UCSB? We have 19, 20 thousand students that live here in Isla Vista and yet we could get barely 100 people here to sit down and talk about what just happened?”

Although no members of law enforcement were present, Very Reverend Father Jon-Stephens Hedges, chaplain for Isla Vista Foot Patrol, urged the community to band together to care for I.V. just as one might care for a friend.

“When someone that you really love gets pounded on, knocked on the street, kicked around, bruised, cut and then graffitied on, you don’t throw them away, and I’m not throwing Isla Vista away,” Hedges said. “When someone you love gets knocked down like that, you pick them up and clean them up, even if they’ve been graffitied on, you still love them and you clean them up.”

Fifth-year student Josh Plotke proposed a plan to make Isla Vista a community service district, allowing the area to have more autonomy without going through the difficult process of becoming a city. Although he explained the transition into a community service district would still be a long-term goal, he gave details on the needs Isla Vista has that could be addressed by a local government.

“Currently, I.V. is governed somewhat by UCSB, and as an unwanted stepchild of the county and by other small entities,” Plotke said. “The only say residents of Isla Vista have in how it is governed, or for its future, is through the elected Isla Vista Parks Board, but this only controls parks, meaning that Isla Vista has no say in its future outside the governance of parks.” 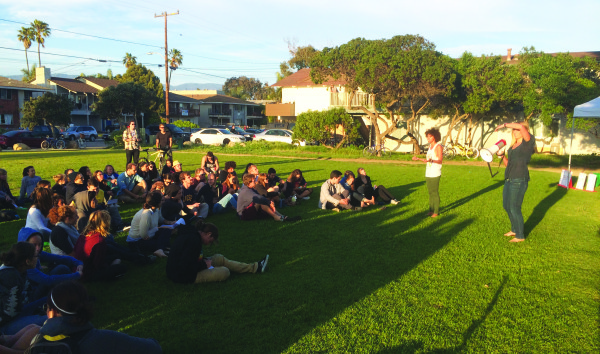 Representatives from various campus and local organizations gather in Del Playa Park to discuss the repercussions of Deltopia.

A version of this article appeared in the Thursday, April 10 of the Daily Nexus.

I’d like to clarify what I was quoted in the article. I came out to the open forum with the expectation that there would be LESS than 100 people attending. I say it in accordance with the rest of my opinion– that we lack ACTION after REACTION. As a 2011 Alumni and current IV business owner, I’ve experienced both sides of being a student trying to enjoy our weekends and an individual working to maintain a real-life income. Experiencing the 2009 Floatopia, it’s aftermath, and conversation about post/proactivity, there are strong parallels as to the strong social (media) outcry for… Read more »

As I am sure most are familiar, this is not a new issue in Isla Vista, though the creation of the so-called Deltopia festival is a new wrinkle. I played bass for streetdogs, in the late 70’s. We were fortunate to arrive on the scene simultaneously with the inauguration of Anis Qoyo Park and played a multitude of saturday night block parties. We used the Isla Foot Patrol to our advantage and they used us to theirs. I refer you this excerpt from streetdogs archive: “The military arm of government in Isla Vista was a little Santa Barbara Sheriff’s outpost… Read more »