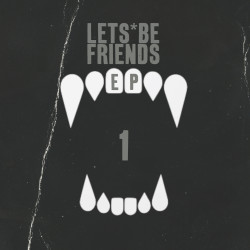 Recently, one of my friends was listening to a remix of Justice’s popular song “We Are Your Friends.” Instead of the usual repetitive “We are… your friends!” verse, this version began with “We are… [awkward pause] friends!” A few bars later, the song’s true intro finally revealed who the remix was by: “We are… Let’s Be Friends!” Let’s Be Friends, the electronic duo from the U.K., used a clever play on a classic Justice song and introduced themselves to my friends and me.
After hearing a few of their songs and sets, it became clear that any Knife Party or Nero lover would fall head over heels for these rising stars. So when I heard that Let’s Be Friends would be playing alongside Ivan Gough and Starkillers at the Avalon in Hollywood on March 28, I did what a good friend should and bought tickets.

The show itself was an interesting mixture of big room house with Ivan Gough and electro house with Starkillers’ two-hour set — a set that was full of fist-pumping, C-walking, shuffling bro energy and lasted about 60 minutes too long. Perhaps I was just biased because I had arrived at Avalon at 11 p.m. and waited three hours before Let’s Be Friends came on.

They announced that this was their American debut and I am so glad I got to witness this soon-to-be epic moment in history. I was also pleased to see that they opened their set with their usual “We are… Let’s Be Friends!” intro. As predicted, they started off their set with a bang, continuing with banger after banger. Although the clubbers were slowly beginning to trickle on home, those dedicated to stay were still present on the dance floor and going hard — very hard.

Let’s Be Friends had this ability to play Jason Derulo followed by Mindless Self Indulgence and not have anyone bat a single eyelash. Although I had walked into the venue with high hopes, there would be occasional moments where I would be like, “Oh ok, you’re going to play ‘Animals’ by Martin Garrix now? That’s original,” but I was soon silenced by, hands down, the best remix of a polarizing song. They weren’t even pulling a Deadmau5 and trolling the audience either. They played the song for what it was, made it work and delivered. If you can one-up a big name like Deadmau5, I applaud you Let’s Be Friends, I really do.

The surprises kept coming as I heard the infamous intro of Nirvana’s “Smells Like Teen Spirit” which has been a huge fad in the DJ community since Hardwell realized in 2012 that incorporating classic rock into EDM sets really riles up the crowd. So when I heard the familiar and much loved intro to the Nirvana song, I was afraid Let’s Be Friends was falling into yet another EDM trend trap. Except the tables turned when — I’m not even really sure how to explain what happened to my ears, but it was kind of like eating a brown M&M and finding out it was in fact a purple skittle: It was mind-blowing. No — mind-blasting.

With the EDM community complaining over how recycled the scene has become recently, I have found you all a solution and they come from two British boys who call themselves Let’s Be Friends (and with a little Kendrick Lamar, DJ Snake and Junior Senior thrown in). This was the first set in a very, very long time that I have enjoyed every single second of. That being said, I see a lot in these boys’ future, and if you’re a self-ordained hipster who likes to enjoy music before it gets too mainstream, I definitely recommend checking these boys out on their SoundCloud (under “letsbefriendsuk”) before they blow up.

Graphic Courtesy of Let’s Be Friends.

A version of this story appeared on page 10 of Thursday, April 10, 2014′s print edition of the Daily Nexus.