The Daily Nexus
News
Student Health Opens Clinic for Second Dose of Meningitis Vaccine
April 9, 2014 at 5:00 am by Carissa Quiambao

The second dose of the meningitis B vaccine is currently being offered at the Recreation Center until this Friday from 10 a.m. to 6 p.m., except Thursday when vaccinations will be offered from 10 a.m. to 8 p.m.

According to Mary Ferris, executive director of Student Health Services, the Center for Disease Control still considers the UCSB campus to be at risk because of the four cases of meningitis in November, so it is important students receive the second dose of the vaccine in order to strengthen their meningitis immunity.

“We really want to encourage students who have missed it the first time to come in and get the first shot, and we will arrange for those who get the first shot to come to Student Health for second shot,” Ferris said. “But these are the last three days to get the shot, so it’s important students come through.”

Senior Associate Dean of Students Debbie Fleming said the more students get vaccinated, the better protected the entire UCSB population can be from another meningitis outbreak.

“It’s not just getting protected for yourself. It’s also important for herd immunity,” Fleming said. “It’s important a lot of people come forward and get protected so we don’t have to deal with meningitis in the community.”

According to Ferris, while Princeton University is offering their incoming freshmen the meningitis vaccine due to a new case that has recently arisen with a Drexel University student who had contact with someone at Princeton, UCSB’s outbreak has yet to see any risk since November’s cases.

“The great news is that of the four students who contracted meningitis, three recovered pretty quickly and are back at classes,” Ferris said. “The one student that had their feet amputated — he’s planning to come back in the fall.”

Ferris also said Student Health will be offering free doughnuts from 10 a.m. to 12 p.m. and certified Dog Therapy dog therapists Wednesday and Friday from 12 p.m. to 2 p.m. in front of the Multi-Activity Court in the RecCen.

According to Health & Wellness Events Coordinator and third-year biopsychology major Tiffany Chen, even if someone is not affected by meningitis, they can still become a carrier, therefore getting a second dose is beneficial not only to the individual but also to the campus community.

“Even if it doesn’t affect you, it affects the community,” Chen said. “Health & Wellness advisors are helping at the clinic and trying to pass a good message — to get vaccinated and get healthy to prevent the spread of meningitis.”

“We are so pleased students are coming back for their second shot and didn’t have any terrible reactions,” Ferris said. “It’s pretty assuring that it will be a safe experience.” 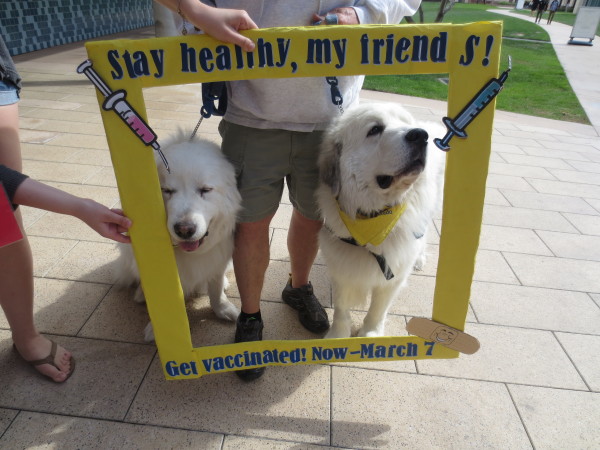 According to executive director of Student Health Services Mary Ferris, certified therapy dogs will be available at the Rec Cen during clinic hours.

A version of this article appeared in the Wednesday, April 9 edition of the Daily Nexus.

I received my first shot yesterday at noon and was in the E.R. by 1:30pm from an allergic reaction to the vaccine so I would say that even though the statistics are low the vaccine has not worked perfectly.