The Daily Nexus
Science & Tech
Snowy Plovers Cuddling Up For Start of Nesting Season
April 9, 2014 at 9:19 pm by Kaitlin Cuskey 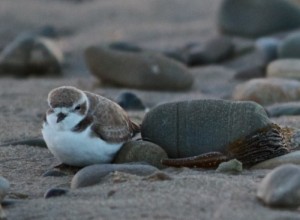 Spring is a time of renewal, and as our university community enters a fresh spring quarter, our beach cohabitants, the Western Snowy Plover, also embark on a period of transition with the start of a new nesting season beginning March 15 and continuing through September.

The Western Snowy Plovers (Charadrius nivosus nivosus) occupy a range that stretches from Baja up along the coast to Washington, with the majority of their population inhabiting California’s central coast. Our particular community of plovers makes their home at Coal Oil Point Reserve, more commonly known as Sands Beach. Up to 400 plovers feed and rest on Sands Beach each winter, making it the largest aggregation of Western Snowy Plovers in the United States.

Despite the prevalence of plovers at Sands Beach, the birds are listed as threatened under the Endangered Species Act of 1993. In May 2012, U. S. Fish and Wildlife Service increased the “Critical Habitat” allocations for the coasts of California, Oregon and Washington, for the plovers’ beach-dune ecosystems from 12,150 acres to 24,527 acres.

According to April Price, a conservation specialist at Coal Oil Point Reserve, conservation efforts were made to reinstate the plover habitat at Sands Beach after the birds stopped nesting in this location several decades ago.

“Sands Beach was a historic nesting ground for the plovers, but the birds stopped nesting there in the 1970s,” Price said. “In 2001, based on research by UCSB’s Kevin Lafferty, Coal Oil Point Reserve fenced off a portion of Sands Beach that was being used by the wintering flock of plovers. That year, Sands Beach had its first plover nest in 30 years.”

Thanks mainly in part to the conservation measures implemented in 2001, Sands Beach represents a successful case of survival and recovery for the population of plovers after completely losing its breeding population for several decades.

Price said, however, that continued efforts to encourage plover nesting are necessary to maintain their delicate population. Nesting season is a particularly susceptible time for the birds seeing that in order to successfully breed, the plovers must be able to lay their eggs in the sand undisturbed for one month. As humans and dogs freely roam and share the sandy habitat with the plovers, this month long time frame is highly sensitive Price said.

“During the month long incubation period, both parents take turns sitting on the nest. They can be scared from the nests easily — by dogs, people or predators,” Price said. “When the nest is not being incubated, the eggs are at risk to exposure, depredation and even being stepped on. The eggs blend in extremely well to the sand.”

After the eggs hatch, the well-camouflaged chicks must feed themselves, running back and forth to the water until they learn how to fly approximately one month later. Price said that during this time, beachgoers — both humans and dogs alike — complicate plover survival.

“When the eggs hatch, the chicks are on their feet on the first day and must feed for themselves,” Price said. “The vulnerable chicks must be able to run back and forth between the dune system and the beach where they feed. At this time, the chicks may become separated from their parents by disturbances such as dogs or groups of people, thus threatening their survival.”

Human impact on the environment poses an extreme challenge to the Western Snowy Plovers’ continued survival. Taking simple steps to protect the ecosystem at Sands Beach is key in protecting and sustaining the plover’s population in addition to forging a practice of protecting other species and environments.

“At UCSB’s Coal Oil Point Reserve, we can take simple steps to sustain a breeding population of Western Snowy Plovers simply by leashing our dogs and giving the birds space to breed and feed. By protecting [their] habitat, the UCSB community is setting a great example for the local community and beyond that prioritizes conservation and education,” Price said.