With crowds numbering 20,000 to 25,000 and the riot that ensued, this year’s festivities reveal higher crime rates

UPDATE: Of the 412 arrests and citations during Deltopia, 91 percent — or 376 cases — were “not affiliated” with UCSB, according to a statement by Chancellor Henry T. Yang.

This past weekend’s Deltopia street party and riot drew in crowds numbering 20,000 to 25,000 — as compared to last year’s attendance of just 15,000 to 18,000 — and total arrests rose by 491 percent from last year’s event, according to preliminary numbers released today by police officials.

According to information compiled by the Santa Barbara County Sheriff’s Office, the springtime festivities resulted in 130 arrests and 190 citations throughout Saturday, the official day of Deltopia, marking an increase from last year’s 22 arrests and 116 citations. On Friday, officers made another 36 arrests and gave out 88 citations, and the weekend saw a total of 520 law enforcement calls for service, 50 medical transports, 108 fire calls for service and 108 medical calls for service. Over half the people transported to local hospitals had sustained injuries following riots that broke out later in the day.

Of 62 students arrested or given citations who gave police officials their school affiliation, over half of them said they attended a school outside Santa Barbara County, according to a Sheriff’s Office statement. All data currently released is “preliminary” and final numbers will be released at a later date.

Police officials have said the day’s events escalated to a “civil unrest” — complete with police in riot gear, tear gas and firing of rubber bullets — when an officer was struck in the head with a backpack full of alcohol bottles. A Los Angeles teen, 17 year-old Desmond Louis Edwards, is now being tried as an adult for the attack and is facing charges of assaulting and resisting a police officer, along with multiple other charges. Six officers were injured and four of them were transported to local hospitals: two for head injuries and two for hand injuries. Sheriff’s Office Spokesperson Kelly Hoover has said the injuries were caused by partygoers throwing bottles and rocks at the officers.

The Sheriff’s Office is currently investigating the cause of the riots, reviewing video footage taken by cameras — funded by the university — that were installed along Del Playa Drive in the days leading up to Deltopia. Officials are also seeking any other video footage of the riots, which reportedly broke out around 9:30 p.m.

“The Sheriff’s Office is conducting an investigation into the circumstances of the riot and is seeking to identify individuals who were actively involved,” according to a Sheriff’s Office press release. “They are reviewing videos from the riot, including footage that was stored on cameras placed along Del Playa Drive.”

Among the 62 students arrested or given citations who gave police officials their school affiliation, 10 were reportedly Santa Barbara City College students, 16 were UCSB students and 36 said they attend a school outside the County. However, the Sheriff’s Office has said it is still “gathering information on where those arrested and cited were from,” according to the statement.

Of the citations issued, 64 were for drunk in public, 100 for minor in possession, 68 for open containers and 11 for violating the County Festival Ordinance, which prohibits “loud music that would attract a crowd,” according to a statement from the Sheriff’s Office. However, the ordinance itself states that it prohibits loud music that is being played for parties of over 500.

Two citations were issued for overcrowded balconies, which was an especially high area of concern for police officials this year since a collapsed frat house balcony at last year’s Deltopia resulted in four students being hospitalized for injuries.

While the day began with an estimated 130 law enforcement officials, more officers were called in from Santa Barbara and Ventura Counties once riots broke out during the evening, bringing the number of personnel to over 190. Of the total arrests made, at least 17 of them were due to involvement in the nighttime civil disturbance.

The Sheriff’s Office is requesting that anyone with video of the incident send the footage to video@sbsherriff.org or call the Sheriff’s Special Investigation Division at (805) 681-4175. 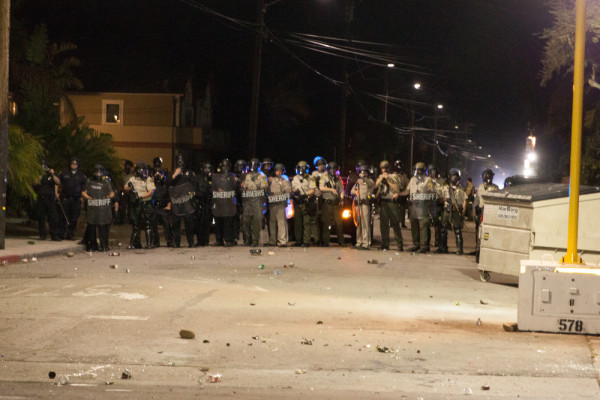 OK, here’s the engineering professor in me talking. If there were 130 arrests this year and 22 last year, the total arrests rose by 491%. The math:

There were nearly 5 times as many arrests this year, a nearly 500% increase.

Also, on Friday and Saturday, there was a total of 444 arrests&citations. Not 412. If they’re only counting Saturday (actual Deltopia), then it’s only 390, STILL NOT 412. Who the fuck wrote this shit article?

Math, ughhhhhhhhhh – it is such a hard concept to understand.

(And the 412 number was referring to the Chancellor’s statement, who presumably was basing it off of an earlier number from the Sheriff’s Dept.)

Are you really complaining about the difference of ~30 arrests?
The fact that there WERE 400 fucking arrests should be the alarming part. Who the fuck cares whether the article didn’t get the latest numbers when the point is a lot of fucking dumbasses got arrested?

Who the heck invited a 17 year old from LA to Deltopia? Nothing says awesome college party like inviting non-local high schoolers!

Just an fyi, for those bring negative comments to a journalist who, for one did a pretty good job with the numbers herself. As a student reporter at Sac State and Santa Barbara County native, I am embarrassed that you attend UCSB. Just for the simple fact, that you did not care about those who were affected. So what if she is a journalist major and so what you guys seem to be smarter than her. My point is everyone makes mistakes. And for shame everyone who had nothing good to say for the well written article than she put… Read more »

I tried really hard to decipher your post, but it was really difficult considering the numerous grammatical errors and plain ‘ol not-making-sense. What are you even trying to say

gangabngers from SD LA and Oakland don’t need an invite. Isla Vista culture is coming to an end and thankfully so. The UCSB lifestyle will come to an end because of this POS Desmond Edwards

Anyone who was cited for for violating the “County Festival Ordinance” should fight the ticket. I was issued one of those during Halloween 2005 for playing my music loud in my apt on Sabado at 6:50 PM. Plead not guilty and the cops dropped the charges, there’s no way to prove your music attracted over 500 people. I think the ordinance was designed to issue citations over any sort of backyard concert in IV but the IVFP hands them out like candy sometimes.