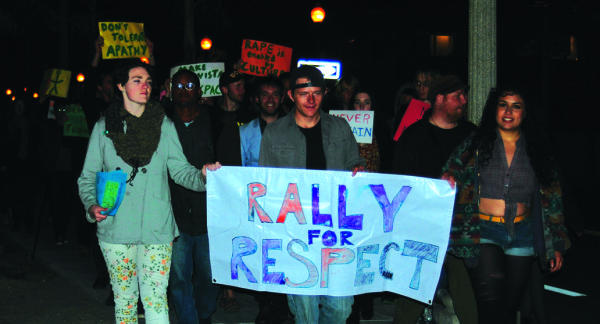 Last Friday, the Santa Barbara Housing Cooperative organized a variety of anti-violence demonstrations that took place all over Isla Vista, including a silent march through the streets of I.V., a candlelit vigil at St. Michael’s University Church and a “Rally for Respect” at Embarcadero Hall.

The Santa Barbara Student Housing Cooperative hosted a protest against sexual assault and other harassment in Isla Vista called “Steps Against Sexual Violence” on Friday.

The protest consisted of a silent night walk, starting at Little Acorn Park across the street from Bagel Café and ending at Embarcadero Hall. The walk was met with both positive and negative reception as well as some confusion from local community members who were passed along the streets.

In addition, the event included a candlelight vigil that took place simultaneously at St. Michael’s University Church, located on the corner of Picasso Road and Camino Pescadero. Afterwards, students gathered for a “Rally for Respect” at Embarcadero Hall.

According to Jeffrey Bessmer, Executive Director of the Santa Barbara Student Housing Cooperative (SBSHC), the organization provides non-discriminatory, low rent co-op housing for UCSB students, staff and faculty. Bessmer said SBSHC coordinated the event in an attempt to encourage students “look out for one another” to make Isla Vista a safer community.

“We want to show that our community opposes any culture that supports sexual assaults, and we want people to stand up for each other,” Bessmer said. “We know the power of bystander intervention.”

Brian Granger, a member of the SBSHC and primary organizer of the protest, said the event was a response to recent sexual assaults in Isla Vista.

“The only stated goal was simply for concerned students and residents of Isla Vista to come together and make a public statement about our objection to violence in our community, particularly sexual violence and the various ways we all intentionally and unintentionally support or allow a culture of rape to thrive,” Granger said.

According to Granger, the protest was also meant to inspire community members to reflect on how the party culture of Isla Vista perpetuates sexual assault. Granger posed questions that he hoped attendees considered, such as, “How might we work together and individually take steps in ending this violence and make I.V. safe for everyone?”

“The scope of the event was not about answering these questions but simply to provoke them in people,” Granger said. “That’s why we called the event ‘Steps Against Sexual Violence.’”

Granger said he observed that a feeling of solidarity was instilled in everyone who participated in the protest. Watching this, he said, made him feel emotional and moved.

“As we walked on every block, people would quietly join us. They would walk with us for a few blocks, swelling our numbers in the street, before stopping and rejoining their friends or returning to some party back down the street,” Granger said. “It was touching to see that.”

However, the protest also drew mixed responses from those who came into contact with the group during the march, according to Granger. He said he felt surprised that while some passerbys waved and shouted supportive words, others threw out “really sad comments,” a good number of those people being in “various stages of drunkenness.”

“We expected this, but you still feel pity for some student who, in trying to impress his friends or be funny, feels the need to yell out, ‘Hey, we should attack them,’” Granger said.

Due to the fact that the march was silent, many onlookers were confused about what the protest was about. Some people believed it was an anti-Deltopia movement while others were under the impression that protestors belonged to a religious organization.

Granger said the event was met with complaints as the protestors moved down Del Playa Drive. In response, Granger said he suggests that members of the community focus the energy they use to criticize peaceful walks on coalition-building and taking action against recent incidents in the community.

“If you don’t like the idea of a protest walk down DP, you don’t have to walk with us. If you don’t like the idea of a quiet vigil in a church, or the idea that prayer — or the collective power of meditation — can effect real change, you don’t have to pray or engage with the spiritual,” Granger said. “But just don’t sit there wasting this moment of life and complain. Get up and do something positive for the community in the way that only you can uniquely and beautifully do it.”

Granger encouraged students to take initiative and start anti-rape protests of their own rather than defer the responsibility to the county or groups like SBSHC.

“The event shows that there is a need for more public discussion of sexual violence, not less. Who will host the next one?” Granger said.

Lizzie Harzy, a third-year anthropology major, participated in the protest and said the SBSHC threw a “consent-themed party” after the event. The party was held in order to illustrate that the culture of Isla Vista does not need to have a basis of justification in the objectification of people’s bodies.

“Our party is just to celebrate that we can have a lot of fun in a respectful way [with] alcohol and music that doesn’t talk about bitches and hoes,” Harzy said.

A version of this story occurred in the Monday, April 7, 2014 edition of the Daily Nexus.

hey kid just because you have shit ideas everyone dismisses doesn’t mean you have to shit on everyone else’s to make up for it. This is something social and positive