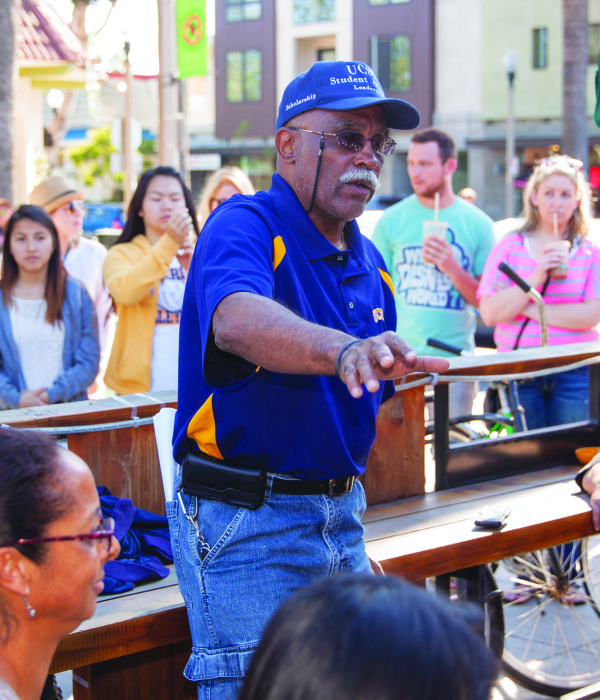 UCSB Vice Chancellor for Student Affairs Michael Young held an open forum with students, administrators and community leaders yesterday at the Coffee Collaborative to discuss the destruction caused by Deltopia and the future of such events in Isla Vista.

The discussion touched on the role played by recently erected video surveillance posts and “out-of-towners” in Saturday’s “civil unrest,” comparisons between Deltopia and Floatopia and taking steps to regulate future large-scale events. Representatives from Associated Students, the Division of Student Affairs and the Isla Vista Food Co-op were in attendance, although no personnel from any of the law enforcement agencies that responded Saturday night were present.

The meeting, which started as a Reddit Ask Me Anything (AMA), drew a small crowd of students and residents that spilled over onto the sidewalk in the late hours of the afternoon.

When asked how the six surveillance towers contributed to the incidents Saturday night, Young said the idea that the controversy surrounding the camera installations caused the violence was far-fetched.

“I don’t buy this ‘the camera’s caused us to behave that way.’ Please don’t say that …that’s just silly,” Young said. “I don’t think they caused anything … I want a camera when something has happened. When one of my students is assaulted, I want to know who did it.”

Katya Armistead, associate dean of students, said the cameras are not being pointed into bedrooms or private residences, and residents need to have a better understanding of what this surveillance is targeting.

“We should do an educational campaign about what these cameras are really used for, where they are really pointed, how they’ll use footage,” Armistead said. “I know that Alex Moore and Associated Students … has been really concerned about that so I’m definitely going to work closely with him to have him better understand it.”

Another student asked Young how the events on Saturday compare to the Floatopia beach party that began several years ago on Isla Vista beaches and evolved into Deltopia after law enforcement began closing off beach access for the weekend in 2010. Young said the event was detrimental to local beaches and dangerous for those in attendance.

“Floatopia was one of the worst, gratuitous destruction of the environment and disregard for the safety of others … If you looked at the destruction that was left there, it was mind-bending to me,” Young said. “I don’t care if students who are of age have a drink, I don’t care if people engage in intimate relationships as long as everyone is consenting — [that’s] none of my business — but what I do care about is destruction and abuse of people and the environment in the name of fun.”

Young said he does not know how many “outsiders” contributed to the violence that occurred over the weekend, but the fact that there are so many visitors is a major problem for the community.

“It makes me crazy that outsiders come into our midst … come into our homes, destroy our property, assault our citizens, steal from them … overburden our emergency services,” Young said. “My wife has had two ambulance trips in the last four months, I’d be pissed if she couldn’t get an ambulance because they are tied up in here looking for a bunch of people who are here just to cause trouble, get drunk … and think it’s cool to destroy my community … that’s how I feel.”

Young said he benefited from the meeting but emphasized he cannot be sure how the county will respond to the events of Deltopia.

“The truth is I don’t think we know what the possibilities are, what the likelihood is, certainly from what the county does. The county’s going to have its own approach to this,” Young said. “I can tell you is that this meeting is great for me from my standpoint — I got some ideas about some things we might do to mitigate, make for a healthy kind of environment.”

Robert Wickham, a third-year mathematics and CCS literature major, said he thought Deltopia could be more regulated in the future and take on the characteristics of a structured music festival.

“My idea for Halloween would be turn them into festivals sort of like Coachella. I believe we should turn the three big parts on Del Playa into stages,” Wickham said. “We would block off Del Playa in a way where police can easily regulate access where there will only be two streets where you can enter basically Camino Pascadero street and Camino Corto.”

According to Emily Potter, a second-year literature and sociology major, the meeting was helpful because it educated her on what the university can actually do to address the events of the weekend.

“One thing we talked about was starting a conversation with the county because what I learned in this meeting was how little power the actual university administration actually has over helping us set up these events,” Potter said. “It’s up to us to [be] communicating with the county. They are the ones that can give us permission to block off Del Playa.”

A version of this story occurred in the Monday, April 7, 2014 edition of the Daily Nexus.

I apologize for the cross-post as I posted this under the surveillance article comments section, but now that this article is up, the comments are more appropriate in response to this story… Vice Chancellor of Student Affairs, Dr. Michael Young, engaged the community this afternoon via Reddit. I applaud him for doing so, and it represents a good start. I share with you his comments regarding the surveillance cameras. The entire discussion may be found within the threads here: http://www.reddit.com/r/UCSantaBarbara/comments/22damr/i_am_ucsb_vice_chancellor_of_student_affairs/ Q: Do you think the camera’s did anything to actually prevent any crimes from being committed last night? Bad stuff… Read more »

To me, your questions have no value. What’s important is not how or even why but what. What will they use these cameras for? The answer is to solve crimes and general safety. If your okay with that then the other things don’t matter. There is no value in asking who monitors them. It makes no difference whether it is the school, police, government. They’re in place for safety so what does it matter? For me it didn’t matter how long they took to deliberate… it only takes a second, using common sense, to know that these cameras are for… Read more »

You might find his questions silly, but I certainly find your world view naïve. The idea, that cameras, once they are up, will only ever be used for one purpose is patently ridiculous. You’re presupposing not only that use of the footage, now that the cameras are up, will always remain restricted for one specific purpose, but also that access to the footage will never be abused by anyone who has access to it, and that the footage will not end up in hands that were never supposed to have it. The mere existence of the cameras is more of… Read more »

I get why I sound naive. I sound naive because I don’t care. I don’t care because those questions aren’t important to me. Those questions aren’t important to be because I DO want the cameras and my want is so strong that I am willing to suspend concern about all those nearly inconsequential reasons to not support them in the first place. Ask yourself what is more important, safeguarding human life and the safety of our community by implementing the cameras OR the cameras having the occasional (supposed, possible) misuse by people designated to protect us? Who cares what happens… Read more »

The beast always adapts to its environment, and the human beast is adaptive indeed! IMO, it’s foolish to think that by changing X will lead to result Y. Changing X will change all sorts of other things as well. We all react to changes in rules whether consciously or unconsciously. We adapt to rules and unintended consequences follow. Think of the chilling effects on free speech and assembly with government surveillance. Think of a cause that might be dear to you like drug laws, gay marriage, NSA spying, police brutality, corruption, pro or anti abortion, stop to wars, etc. Some… Read more »

While I applaud this administrator meeting with folks informally, I have to say he’s naive. Blaming “outsiders” exclusively for what happened on the weekend ignores two things: 1) IV’s long history of violent confrontations with police when residents decide they’ve had enough and 2) the hatred of government and of law enforcement which has reached all time highs nationally and locally. While cameras do have their uses, there are serious concerns with their misuse. History has repeatedly shown that, when given power, government will eventually abuse it. In the case of IV the reported number of cameras (75) seems on… Read more »