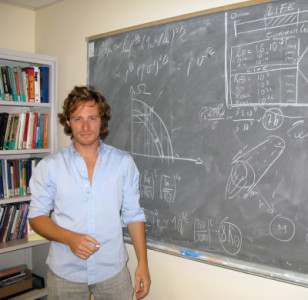 Despite the broad and plentiful array of research abounding on the University of California, Santa Barbara campus, many do not have the opportunity to learn about these scientific explorations in an approachable setting. This evening, however, marks the debut of the Kavli Institute for Theoretical Physics’ (KITP) series of research showcases, known individually as “science cafés,” which will feature a sample of UCSB’s best and brightest researchers presenting their work in a digestible and readily-accessible format.

Tonight’s episode, titled “Music of the Spheres: The Secret Songs of Stars,” will be hosted by astrophysicist and associate specialist in the KAVLI institute Matteo Cantiello. His talk will focus on how NASA’s Kepler satellite traces the oscillations of thousands of stars to discover new planets. More specifically, Cantiello’s work focuses on stellar evolution, or the growth, life and death cycles of stars, as well as the possibility of life on other planets.

KITP deputy director and biological physicist Greg Huber said that the theme of tonight’s talk came from KITP’s involvement in advancing asteroseismology, or the study of the internal structure of pulsating stars by the interpretation of their frequency spectra.

“‘Music of the Spheres’ refers to the ‘tone-like pulsations’ displayed by stars — and it’s a fitting topic for the first café, since the KITP was critical in nucleating a number of the recent advances in the field of asteroseismology,” Huber said.

Cantiello’s work focuses on probing the deep interiors of stars, exploiting a technique that uses the oscillations they produce when ‘strummed’ like giant, celestial-musical instruments. KITP works on simulating the structures of stellar bodies using super computational modeling methods that can also provide information on the properties of planets near stars of focus.

Stellar brightness provides clues into the composition of stars, and the characteristics of planets can be measured by their orbits when they temporarily block light from the luminous spheres. Cantiello anticipates that by detecting far-off planets, he may find hidden messages from fellow inquisitive beings.

“Compared to the distances in the cosmos we are insignificant, and yet we can aspire to understanding its fundamental laws,” Cantiello said.

This evening’s science café is one of several talks Cantiello has given about stars, ranging from audiences of high school students in Santa Barbara, the New York-based startup studio “Betaworks,” members of the Rotary Club in Italy — and even attendants of the “Burning Man” festival in Nevada.

According to Cantiello, his fascination with the mysteries and the sheer expanse of the universe fueled his desire to share it with others through Café KITP.

“The sheer size of the Universe, the fact [that] we are made of stardust … the existence of billions of worlds, possibly similar to Earth, just in our own galaxy — when I think about this, I can never escape a feeling of awe,” Cantiello said. “That is the feeling I care to share with the people around me. It is why I enjoy giving talks to different audiences.”

Ivan Amato, a contributor of Washington D.C.’s own version of “science café” and KITP journalist-in-residence, provided the following meta-societal view: “One of the greatest values of science cafés, especially when they occur in public downtown settings, is that they meld into the cultural landscape. They demonstrate, during a fun, illuminating and uplifting night out on the town, that science is an integral part of culture — not apart from it.