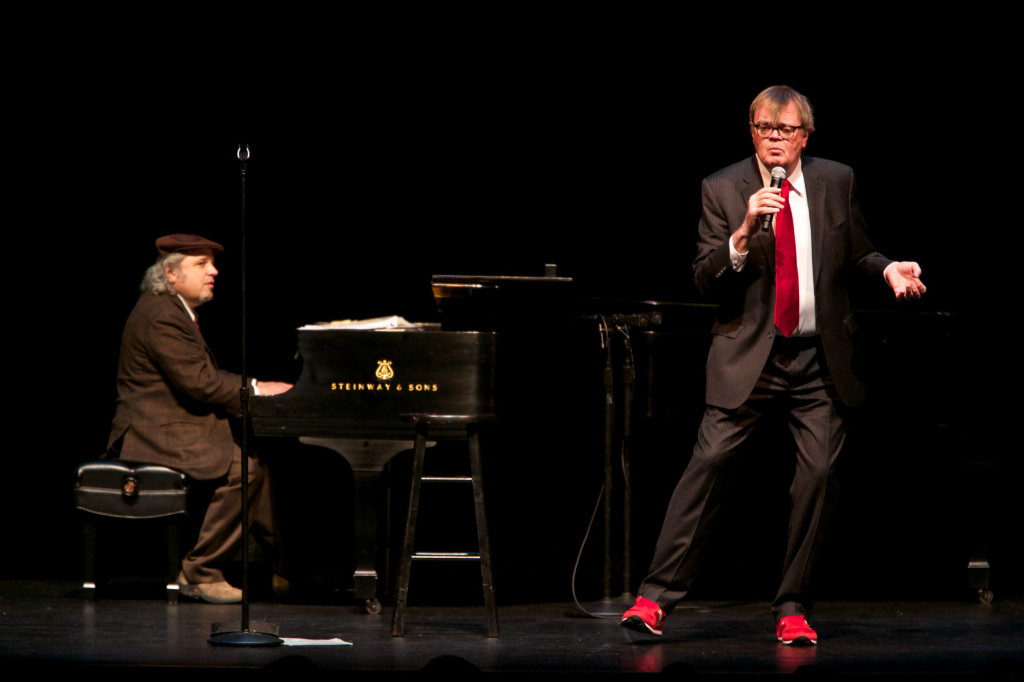 Garrison Keillor and pianist Richard Dworsky sang a number of folk songs in place of the regular music guests on the show.

Keillor initially gained fame as a radio host during the initial run of “A Prairie Home Companion” between 1974 and 1978, but continues the show on a weekly basis today on a number of mostly public radio stations nationwide such as National Public Radio. In his standard radio shows, Keillor became known for singing and bringing on musical guests as well as telling humorous anecdotes taking place in the fictional town of Lake Wobegon, a parody of Keillor’s boyhood town in Minnesota.

During Wednesday’s show, Keillor maintained much of the hallmark elements of his broadcast show, making jokes about typical characteristics of small Midwestern towns and the heavy influence of Lutheran values on the culture of Middle America. Joining him on stage was Keillor’s music director and resident pianist Richard Dworsky, with whom Keillor sung popular folk songs, asking the crowd to participate to emphasize the universal American culture that his Midwestern upbringing and the west coast share.

Keillor explained during the show that much of his brand of humor comes from efforts he and his family made to remain cheerful despite difficult circumstances.

He also described how he came to begin working in radio, citing his work as a sports writer with a dying newspaper rather than becoming a football player as he originally intended as a major influence.

He said, “[The newspaper] paid me two dollars for a story to go write heroic accounts of losing football games and make it sound as good as possible, and instead of being fourth string fifth string end or a tackling dummy for all the boys I sat at a press box — sat up there next to the guys doing the radio play-by-play so I got a lot of information from them, which made me sound smarter than I was.”

Although Keillor, now 71, admitted most of the audience is within his age group, a number of UCSB students in attendance identified themselves as long-time fans. Steven Peterson, a second-year linguistics major, said he became a fan of the show three of four years ago, attributing much of Keillor’s appeal to his voice.

“His voice, first of all, is really cool. It’s a really great voice for radio, and so it’s really cool to see him live and you know, actually see him in person. But I don’t know, he just kind of has this cool charm about him [that] sort of fits the program he’s doing,” Peterson said.

First-year linguistics major Alice He said she especially appreciated Keillor’s use of audience participation during the live show, something that cannot be done in the usual radio format. Although Keillor’s voice improves the listening experience, He also said that something about the nature of the stories told have a universal appeal.

“I really like the stories, they have this really nice feeling about them. And his voice, his voice just adds to the story and makes it even better,” she said.

“Yeah, definitely [better seeing him live]. I mean, I listen to his radio program all the time, and seeing him in person just adds to it,” Olsing said. “I love his voice, he’s got a really very special voice.”

Another audience member who requested to be identified by the initials P.K., said Keillor’s show has a comforting element in it that emphasizes the good in the world.

P.K. said, “He makes me feel from the time that he’s on, that the world is totally beautiful, and even the darkness don’t really exists.”