The Daily Nexus
News
Lois Capps Pushes for Passage of House Bill
March 31, 2014 at 5:00 am by David Jackson 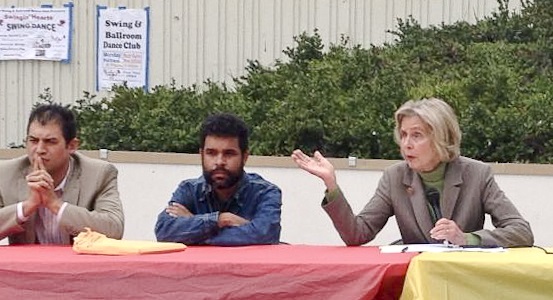 Congresswoman Lois Capps (right) and Assemblyman Das Williams (left) spoke in support of House Resolution 15, which would speed up the process to citizenship for undocumented immigrants.

Congresswoman Lois Capps, representative for California’s 24th district, moved to pass comprehensive immigration reform bill House Resolution 15 on Wednesday by joining other House Democrats in signing a discharge petition that would force a vote on the House floor.

The immigration bill, also called the Border Security, Economic Opportunity, and Immigration Modernization Act, contains elements of the DREAM Act that would make it easier for undocumented students to eventually obtain citizenship. The discharge petition is being conducted as a way to circumvent the Republican House Leadership’s refusal to bring the bill to a vote, despite expressed support from a large majority of Democrats and a number of moderate Republicans.

Originally proposed by Democratic Congressman Joe Garcia of Florida, the bill has acquired 196 Democratic co-sponsors — including Capps — and three Republicans. The discharge petition would need approval from 218 representatives to force the House to vote on the bill. Rep. Capps explained the need for the unconventional discharge petition procedure, citing resistance from Speaker of the House John Boehner, and that a Senate version of the bill that was passed last year.

“We cannot sit idly by as the House Majority Leadership does nothing to fix our broken immigration system,” Capps said in a press release. “The Senate has acted, and now it is time to bring this issue up for a vote on the House floor.”

Capps’ press secretary Chris Meagher said he remains optimistic about the bill’s passing, so long as it is brought to a vote in the House.

“We have the legislation, which is near identical to a bill passed by the Senate, and we have the support,” Meagher said in an email. “Now, all we need is for the House Majority to bring the issue to a vote.”

Meagher also explained that H.R. 15 could potentially affect UCSB students who hope to gain U.S. citizenship, as he said the bill includes language that addresses the legal bind that affects many undocumented students who have lived in the U.S. for many years.

“Included in the bill is an expedited path to citizenship for DREAMERs — those who were brought to this country as young children through no fault of their own,” Meagher said. “This bill would allow these students, as well as many other students and families, to come out of the shadows and work to earn their citizenship in the United States.”

However, despite support from some moderate Republicans, there remains a deep partisan divide over the immigration bill. California State Assemblymember Das Williams said many Republicans refuse to support the legislation as a matter of principle.

“I think there are certain Republican counterparts who will continue to express opposition to any immigration reform bill no matter what,” Williams said in an email. “There are some who believe immigrants just don’t have the right to be here, regardless of how they got here or their circumstances.”

There are currently about 900 undocumented students enrolled in the UC, with UC President Janet Napolitano recently announcing a $5 million initiative to assist these students. However, some students still disagree with the sentiments behind H.R. 15, such as fourth-year financial mathematics and statistics major Trent Rosenquist.

While disagreeing will the bill’s objective, Rosenquist said it also fails to bring in enough savings.

“I don’t support H.R. 15 because I think illegal immigrants take away blue collar jobs from American citizens,” Rosenquist said. “Also, I think the deficit could be reduced by other means. This bill isn’t the most effective way to do it.”

Other segments of the legislation include increased funding for border security, employer verification and steps to improve the efficiency of the visa system, along with an expedited path to citizenship for undocumented young people, students and agricultural workers.

A version of this story appeared on page 3 of Monday, March 31, 2014’s print edition of the Daily Nexus.