The UC System continues to commit funds from the General Endowment Pool (GEP) to invest in fossil fuel companies like Exxon, Chevron and ConocoPhillips. The fossil fuel industry spends over $600 billion per year on hydrocarbon discovery and significant amounts on lobbying and endorsing climate denial, leading many students and faculty to speak out against their institution’s apparent double standard.

An organized coalition known as the Fossil Free Campaign, originating at Swarthmore college in Pennsylvania in 2010, has since gained traction across the nation with thousands of students, faculty, church leaders and city officials espousing the campaign and its contend for fossil fuel divestiture.

“Divestment doesn’t financially cripple the fossil fuel industry, but what it does do is cripple their reputation,” Williams said. “If 500 universities divest tomorrow, someone else will buy up all those stocks, as universities are not ‘big investors’ in the world of finances. However, that news will change the conversation in this country and around the world.”

What began as a grassroots movement has grown into a massive California-wide divestment. Eight out of nine UCs passed student government resolutions urging UC regents to divest the GEP from the 200 companies with the largest carbon reserves, a supply amounting to five times more than what is safe to burn in order to escape runaway climate change. This past May, UCSB was one of the first UCs to pass the resolution in both student and faculty academic senates.

In addition to meeting this April with the Committee on Investments, a branch of the UC administration, the campaign hopes to push for a referendum on next year’s ballot. UC Berkeley has successively implemented a similar initiative last year with 74 percent support, sending the message that the institution stands in solidarity with the City of Berkeley in support of sustainable investments.

College campuses have historically proven capable engines of widespread political and social change and fossil fuel campaign is no exception.

“We are trying to spark, rejuvenate and solidify the vision for a movement on the scale of the civil rights movement, but global this time,” Williams said. “Divestment is a unified voice telling the industry we will not allow for this anymore and changes the conversation to be the kind of conversation this country needs to have happen.” 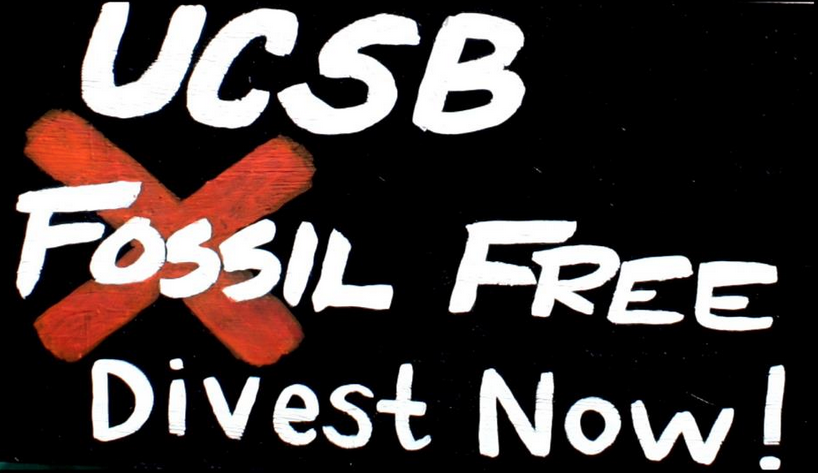 A version of this story appeared on page 6 of Wednesday, March 5, 2014’s print edition of the Daily Nexus.