The Daily Nexus
News
Noam Chomsky Gives Speech in Lobero Theater
March 3, 2014 at 5:05 am by Daniel Slovinsky and Suzanne Becker

The distinguished political theorist presented his lecture, “Security and State Policy,” on existing modes of authority for the Nuclear Age Peace Foundation

In scholarship, Chomsky has contributed heavily to the fields of linguistics and philosophy, and rose to prominence in popular culture through his activism against the Vietnam War in the late 60s. His talk on Friday, entitled “Security and State Policy,” drew upon his experience critiquing government structures and systems of power, as he warned against the risks endangered by relying on existing modes of authority to secure better future for the global populace.

According to Paul Chappell, Peace Leadership Director for the Nuclear Age Peace Foundation, the speech sold out more than a month in advance.

In his opening words, Chappell asked audience members to think of the road to peace as a marathon, as social movements historically have taken years to change political structures.

“The things that Professor Chomsky talks about tonight might sound very controversial,” Chappell said, “but 30 or 40 or 50 years from now they might not sound controversial at all.”

Nuclear Age Peace Foundation founder and president David Krieger shared a poem he published in 2003 entitled “A Conspiracy of Decency,” and discussed the contributions Chomsky made to social progress.

“In our society, Noam Chomsky has become synonymous with speaking truth to power,” Krieger said. “He is a truth-teller to other intellectuals, to those in positions of power, and most importantly, to the people, to all of us.”

Krieger announced Chomsky as the recipient of the Nuclear Age Peace Foundation’s Lifetime Achievement Award for peace leadership, at which point Chomsky entered to a standing ovation.

Chomsky began his speech questioning the assumption implicit in international relations that the highest priority of states is to ensure security. The assertion, he stated, is self-evident until one asks: “Security for whom?”

“Security for state power, for example, is ranked very high,” Chomsky said, “that’s illustrated by the great efforts that states exert to protect themselves from their own populations, even from the scrutiny of their populations.”

Citing Edward Snowden’s justifications for leaking information about the NSA, to applause from much of the audience, Chomsky discussed the public’s “right to know” about government action, mentioning other disseminators of government information Daniel Ellsberg and Chelsea Manning, who he called “courageous figures” acting on democratic principles.

In contrast, the government’s stance counters the “right to know” as potentially undermining national security, according to Chomsky. He called this position worthy of skepticism, as it is “predictable” and “reflexive.”

“There is a sense in which security is threatened by public awareness,” Chomsky said, “namely security of state power from exposure.”

To provide context for his discussion on systems of power, Chomsky quoted political theorist Samuel Huntington, stating that “architects of power” build their influence in the absence of public scrutiny, and that once this power is “exposed to the sunlight it begins to evaporate.”

Therefore, Chomsky asserted that “architects of power” in the U.S, amongst other governments, view security from the domestic public as a “prime concern.” He used “the mislabeled free-trade agreements”, including the North Atlantic Free Trade Agreement, along with Pacific and Atlantic Trade agreements as examples of secretive negotiations that are primarily about investor rights, serving corporate lobbyists and lawyers who write the details of these agreements in security “against the population, not of the population.”

Chomsky challenged the public conception that Iran poses the greatest danger in the world today, citing a recent international poll in which the United States was named the greatest threat by a wide margin, with Iran ranking fairly low.

“The world opinion sharply rejects the domestic obsession that Iran poses the greatest threat to world peace,” Chomsky said. “And in fact, it is an obsession shared almost nowhere else.”

Chomsky criticized the carelessness with which past presidential administrations dealt with the threat of nuclear war, condemning what he called the “near hysterical, rhetoric ravings” of documents such as National Security Council Report 68, which set out the long-term strategy for the U.S. response to communism during the Cold War. He argued that the brinksmanship displayed, for example, by President Kennedy in responding to the Cuban Missile Crisis exemplifies the need for denuclearization even today, noting that maintaining the U.S. nuclear arsenal will cost $350 billion over the next decade.

“It’s a mere miracle that we’ve escaped destruction so far,” Chomsky said, “and the longer we continue to tempt fate, the less likely it is that we can hope for divine intervention to save us from our folly.”

Chomsky continued to criticize U.S. environmental policy, specifically a recent speech in which President Obama proudly declared the expansion of gas and oil exploration nationwide, which Chomsky referred to as a “pretty eloquent death knell for the species.” However, he concluded by remarking that the policies which exhibit an apparent lack of care for public safety and security can only succeed if given public consent.

“Accept [the government’s] terms, everything falls into place, as quite rational, even the rationality of collective suicide, which is exactly the logic we’re pursuing,” Chomsky said. “That’s if the general public permits this to continue. That’s always the fundamental question.”

In response to a question about why state power is valued over individual influence, Chomsky said the problem is not isolated to the United States. Even amongst other global powers, according to Chomsky, “the security of the population is just not much of a concern.” He said this trend lies in contrast to a high interest in the security of state power and of crucial domestic interests, including forms of the commercial sector.

Grant Stanton, a second-year history and political science double major and intern for the Nuclear Age Peace Foundation, assisted in tabling for the organization’s Nukes are Nuts campaign at the main entrance to Lobero Theater. Supporters could have their picture taken with a sign decrying nuclear weaponry, and provide their email to receive updates.

“A lot of people come up here and show their support for Nukes are Nuts, add their picture, add their voices, show that nuclear weapons are not acceptable in the modern age,” Stanton said. “These are real people who are against [nuclear weapons].” 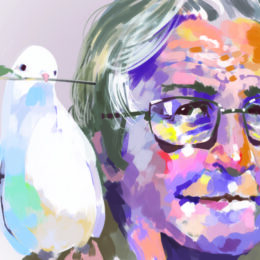 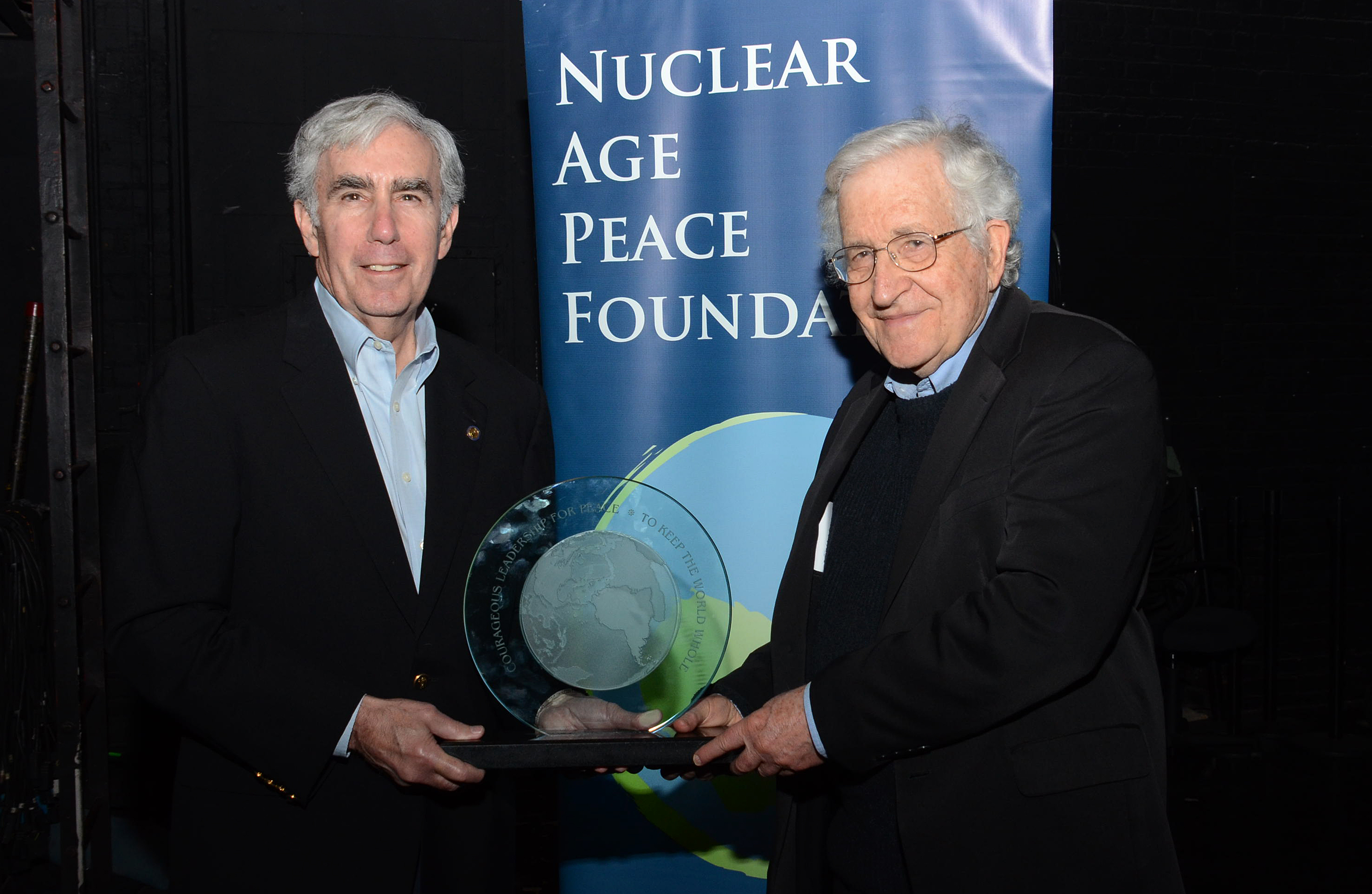 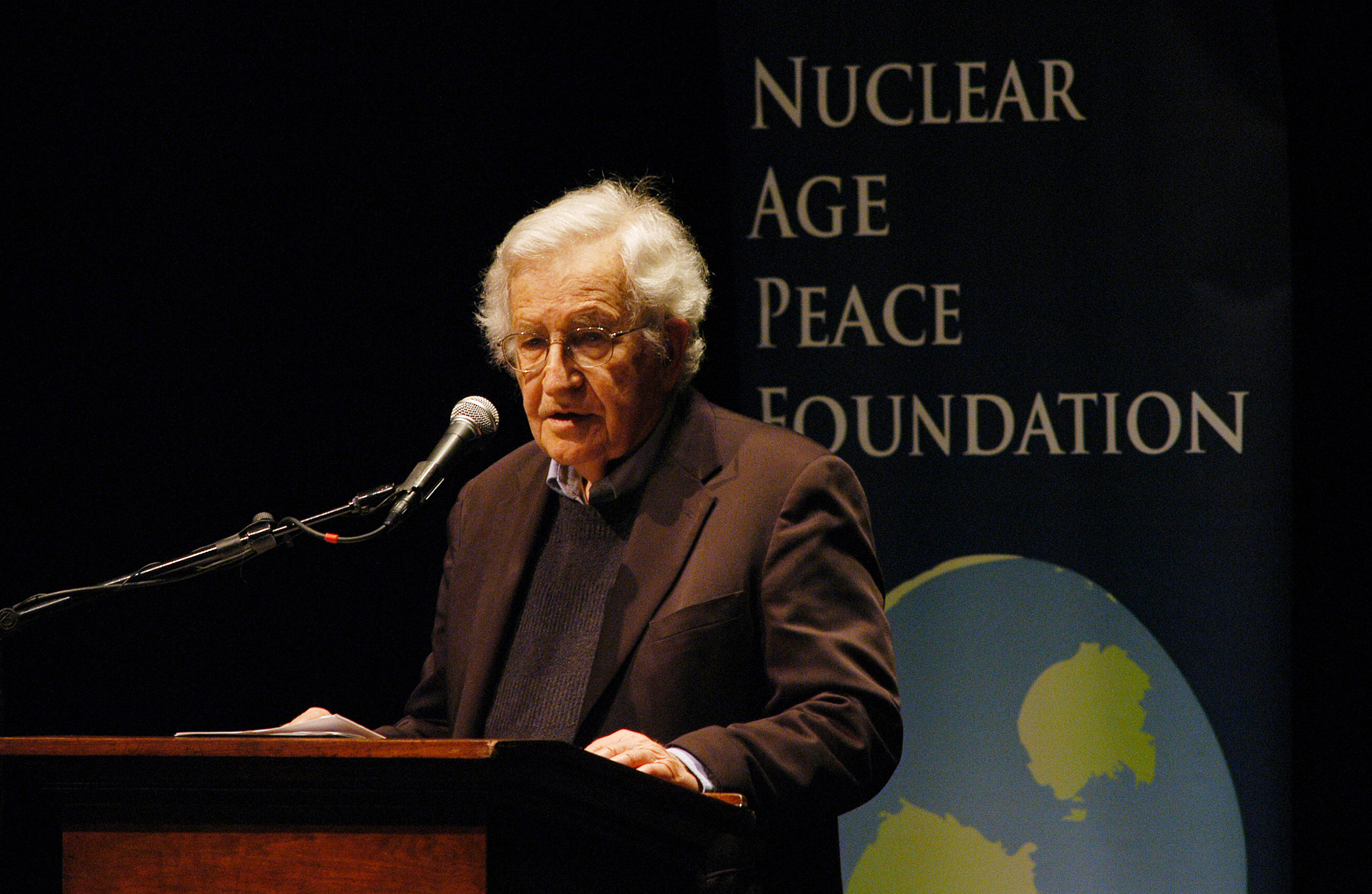 A version of this story appeared on page 1 of Monday, March 3, 2014′s print edition of the Daily Nexus.

Benjamin Kerstein: There are a couple of main points that should be made. First, Chomsky is an absolutely shameless liar. A master of the argument in bad faith. He will say anything in order to get people to believe him. Even worse, he will say anything in order to shut people up who disagree with him. And I’m not necessarily talking about his public critics. If you’ve ever seen how he acts with ordinary students who question what he says, it’s quite horrifying. He simply abuses them in a manner I can only describe as sadistic. That is, he clearly… Read more »

Mr/Ms Arafat:
I don’t think you have read any of Chomsky’s books, i have read all his writings about 65 books on humanities and social issues , your criticism is not based on anything and it shows you are well unacquainted with what chomsky says

I couldn’t help but notice that,for all the reasons you cited in your lengthy critique, there was not one example given to illustrate any of the assertions you made. Apart from that, I’d like to apologize to anybody else who may be reading this for; dignifying your comment with a response.