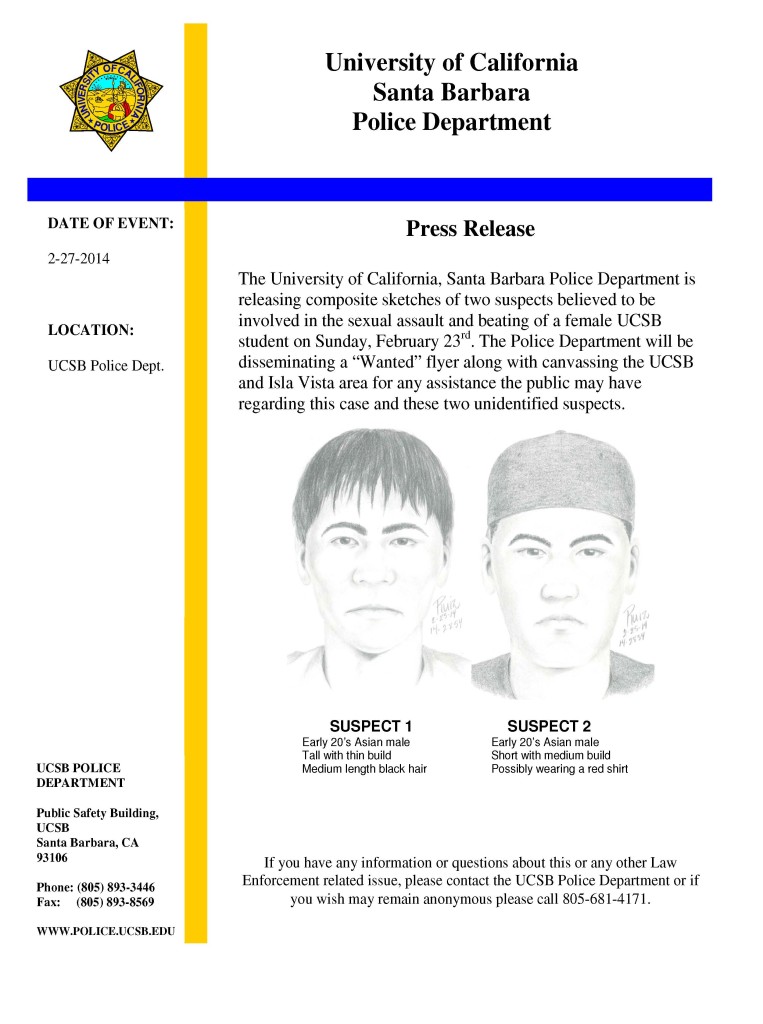 The UCSB Police Department released composite sketches of two of a group of suspects wanted for the beating and gang rape of a 19-year-old student that took place on Feb. 23. Both suspects are described as Asian males in their early 20’s; suspect one is described as tall, with medium-length black hair and a thin build, and suspect two is described as short with a medium build, and possibly wearing a red shirt. Officials posted “Wanted” flyers around campus and the Isla Vista area. Those with information are encouraged to contact the UCSB Police Department at 805-893-3446, the Santa Barbara County Sheriff’s anonymous tip line at 805-681-4171 or visit http://www.sbsheriff.org/anonymoustips.html or http://www.police.ucsb.edu to reach UCPD.

Where is Chancellor Henry Yang’s leadership on this issue? His leadership is completely missing on this issue. If he can’t tackle what has become the biggest crisis facing the campus, perhaps it’s now time for him to step down. Witness Chancellor Dirk’s leadership at Berkeley on the issue of sexual assault prevention and response–it seems that Yang simply doesn’t get it.

Yang is usually on it. In fact, check today’s article: http://dailynexus.com/2014-02-27/a-s-senate-passes-proposal-to-label-trauma-provoking-academic-content/

“Chancellor Yang appeared to deliver letters to each of the senators, in which he declared his determination to take action as a result of the sexual assaults that occurred over the weekend.

Among other promises, Yang stated there will be increased lighting around the UCSB lagoon and more Foot Patrol and Community Service Officers in Isla Vista, in addition to increased staff in the counseling and advocacy services.”

LOL, yawn, you need to worry more about your professor’s who assault innocent people on the street because their views differ from their radical anti-American instructors. Yang rocks, but he needs to get rid of these radicals. you think Tiller the baby kill will be an isolated incident. Don’t bet on it.