The Daily Nexus
News
Take Back the Night Begins Week-Long Campaign
February 26, 2014 at 5:00 am by Brittany Tholan

Take Back the Night, an Associated Students organization aimed at combating rape culture and sexual harassment at UCSB, has taken up a week-long campaign against street harassment, armed with spray paint, posters, t-shirts, chalk and social media.

The campaign, titled #TakeBacktheStreets, specifically targets unwanted attention that people — mostly but not exclusively women — receive from strangers on the streets, such as catcalling. The campaign will include tabling events at which participants can make t-shirts, posters or write their personal stories on cardboard signs, in addition to the distribution of flyers and larger signs around campus.

According to Co-chair of TBTN Kelty Kauffman, a second-year feminist studies and English double major, street harassment is any inappropriate, uncomfortable or unsettling behavior from one stranger to another on the street. It can be anything from a sly comment to a maliciously thrown object, according to Kauffman, who said it is all too common in the Isla Vista community.

“It’s pretty much a daily occurrence,” Kauffman said. “And I think if you ask any woman in Isla Vista, going out at night is not complete unless you get street-harassed at some point.”

Kauffman said that although she cannot tell individuals how to respond in a street harassment situation, the #TakeBacktheStreets campaign is community-driven, hoping to unite locals in fighting street harassment together.

“If your friend or people you know are participating in street harassment … call that shit out,” Kauffman said. “Call it out. It’s not cool and it’s not funny and it’s not okay ever.”

TBTN Co-Chair, Tara Atrian, a second-year sociology and black studies double major, said the inspiration for the event came from a culmination of her own experiences and of those around her.

“That kind of violence against women and LGBTQ folks and women of color can be very triggering and can affect their lives in very negative ways,” Atrian said.

Atrian tabled for the event at the Arbor on Tuesday, encouraging students to spray paint t-shirts with stencils that read, “My name isn’t baby,” “Don’t tell me to smile,” and “We don’t want your attention.”

“Hearing all these things that happen and that it’s so normalized and expected, we decided to do something to show that street harassment’s not okay — we’re not objects,” Atrian said.

Kauffman said street harassment is a ‘microagression,’ and she said its prevalence and the fact that it occurs daily can falsely create justification for it.

“Some people don’t really realize that what they’re doing is inappropriate just because we’re raised in a culture that oftentimes writes it off as, ‘Oh, it’s just a compliment,’ or ‘Oh, its not a big deal,’” Kauffman said. “But in real life, it makes people uncomfortable, and it is a big deal.”

A.S. President Jonathan Abboud met with Take Back the Night members on Monday to discuss a comprehensive plan that he hopes will spread the message of #TakeBacktheStreets beyond the week of the event, which coincidentally, immediately follows two sexual assaults that occurred over the weekend.

“This happens a lot, more than just this past weekend,” Abboud said. “And this weekend was especially bad, which helped make it more apparent to the student body; but, we want to acknowledge rape culture as a thing that exists all the time.”

According to Abboud, A.S. is working to implement a mandatory sexual harassment course similar to the already-required Alcohol Education course, with this new potential course helping to increase bystander awareness.

“The great majority of people in Isla Vista are students and the great majority of them don’t have any education on the issue,” Abboud said. “And a lot of it’s cultural — they were never told otherwise; no one ever educated them that you shouldn’t do that. That’s the University’s responsibility, which it hasn’t done.”

Abboud acknowledged the work of the Women’s Center and CAPS against street harassment and, on a broader term, sexual harassment, but said that a campus-wide response is still lacking.

Kauffman said she hopes to find much-needed solidarity in the social media campaign through the use of the hashtag #TakeBacktheStreets.

“It’s really unifying,” Kauffman said. “It’s able to take all of these experiences that you hear about in I.V. and see on social media and connect them to one source.” 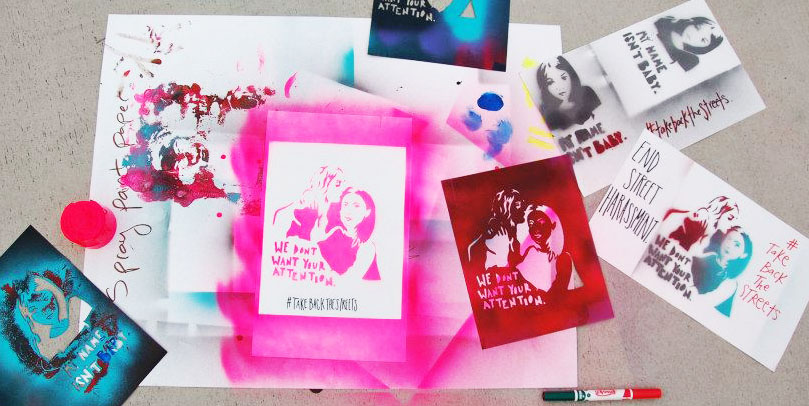 Photo courtesy of UCSB Take Back the Night

A version of this story appeared on page 6 of Wednesday, February 26, 2014’s print edition of the Daily Nexus.

“Take Back The Streets inspired me to stop raping. I’m a changed man now!” said no rapist ever.