The Daily Nexus
News
Congressional Candidate Comes to UCSB
February 26, 2014 at 5:00 am by Aditya Tadanki

Competing with Lois Capps and her 16-year hold onto congressional office, fellow Democratic candidate for 24th Congressional District Representative Paul Coyne came to speak with UCSB students in Campus Democrats at the University Center recently. As part of his campaign, Coyne has put forth a 60-day action agenda, through which he promises to introduce or co-sponsor five of his Congressional priorities within the first 60 days of taking office. These include implementing recommendations by the Simpson-Bowles Commission to reduce spending and reduce the deficit by $4 trillion, introducing the Balanced Budget Amendment to outlaw deficit spending — except in times of war and national emergencies — and introducing a term limit of three terms in the House of Representatives and two terms in the Senate, as well as goals of saving Social Security and Medicare and reducing military spending to 2006 levels.

Coyne, a longtime Santa Maria resident who identifies as fiscally conservative, holds a moderate Democratic stance and stresses the need for careful government spending as a means of preserving the future.

“I do want to make a positive change and make our community better for our children and our grandchildren,” Coyne said. “I don’t want it to be riddled in debt, so we have to practice fiscal responsibility.”

According to Coyne, changes need to be made to existing governmental services, including Social Security, so these remain viable for future generations.

“What many people don’t realize is that the decisions our policymakers make today are the decisions that affect [UCSB students’] generation more than they affect my generation,” Coyne said.

He said this year’s election will allow Santa Barbara residents to choose between two different types of Democratic candidates, with himself as a moderate Democrat and Lois Capps as a liberal Democrat.

Describing Capps as “one of the most liberal members of Congress,” Coyne said her actions in office have not been conducive to saving money or spurring economic productivity.

“She has aligned with the Democratic Party 97 percent of the time,” Coyne said. “She’s liberally spending your tax dollars, which means there will be less economic opportunity when UCSB students graduate and look for jobs.”

Sam Aragon, a first-year economics major and member of Campus Democrats, said Coyne gave students the usual politician behavior, agreeing with students when he needed to and not agreeing other times.

“I definitely think Paul Coyne is a good politician. He really emphasized the things he knew we’d support, and he dodged the ones we didn’t really agree on,” Aragon said. “He says he’s a moderate and will get things done in this Congress, but I highly doubt that.”

“I don’t really stand on the same side of a lot of his issues,” Wiegert said. “To me, he’s a bit too conservative, personally. I don’t know how the rest of the club feels, but I think he’s too conservative to call himself a Democrat.”

According to Wiegert, Campus Democrats will take a vote as a club later in the spring to decide whether to endorse Coyne or Capps.

The primary election will be held in June, and the top two candidates from that election will face off in an election in November to decide the 24th Congressional District’s congressperson. 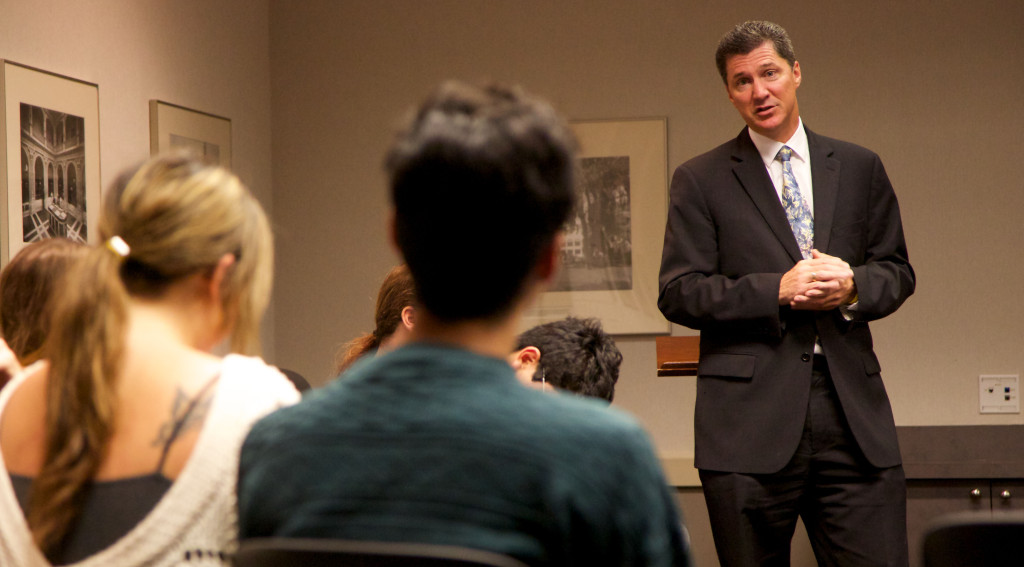 A self-professed “moderate democrat,” Paul Coyne is looking to make a positive change to the community.

A version of this story appeared on page 5 of Wednesday, February 26, 2014’s print edition of the Daily Nexus.