The Daily Nexus
Artsweek
Activist Steinem Calls Community to Action
February 20, 2014 at 5:00 am by Isabel Miller-Bottome

Gloria Steinem — activist, journalist and a leader of the women’s rights movement since the 1960’s — delivered an inspiring and illuminating talk at the Arlington Theatre, Thursday, Feb. 13. With her sharp clarity, humor and relaxed eloquence, she incited the audience to stand together and spread the message of the women’s rights revolution. As a 20-year-old woman whose life has been shaped by Steinem’s activism, I came away from the event more educated and empowered than when I walked in.

She testified before the Senate for the Equal Rights Amendment, founded and co-founded dozens of organizations including the National Women’s Political Caucus, Coalition of Labor Union Women, Choice USA and the Women’s Media Center (with Jane Fonda and Robin Morgan).

She has worked alongside Coretta Scott King and Cesar Chavez, advocating for African Americans, Latinos, LGBT and other minority causes, as well as for animal rights. She has earned over a dozen prestigious awards in her lifetime, including two from the United Nations, an Emmy for her HBO documentary on child abuse and, most recently, the Presidential Medal of Freedom — the highest civilian award in the United States.

The sold-out event, put on by UCSB Arts & Lectures and free for students, was more of a community collaboration than a lecture. The audience was made up of mostly older women and enthusiastic college students, with a handful of male heads scattered throughout. Steinem sought to eliminate “the hierarchy” between speaker and audience, acknowledging, “There is a wisdom and authenticity inside each of us that is unique,” and invited audience members to use the Q&A portion to spread information on community events and organizations, empowering everyone to use this unique opportunity to work toward positive change.

She opened the talk with a core, essential issue to women’s rights: reproductive freedom. She explained that because women are the number one source of reproduction in the world, they must be regulated and controlled by society, and thus, the Patriarchy: “If we didn’t have wombs, we’d be fine!” According to Steinem, male dominance is not natural or inherent in civilization. It has only taken shape in the past 500-600 years. Nevertheless, “It took a long time to establish these male dominant systems so it’s going to take an even longer time to dis-establish them,” she said. Later in the lecture, she emphasized her belief that equality between males and females will never be achieved until men are raising children just as much as women.

The other main issue she spoke about was equal pay, which she sees as the most important step towards progress in gender equality. “Women are the largest group of underpaid workers in history,” she stated. This struggle is what she refers to as “the longest revolution.”

In the United States today, women make up about 50 percent of the work force, earning only 77 cents to every dollar men earn. The disparity increases between men and women within certain minority groups. Even the newly named president of General Motors, the company’s first female president, still earns less than her predecessor, Steinem added. She stressed that equal pay is not just a “women’s issue,” but a “national issue” and “the single greatest economic stimulus,” which would put 200 billion dollars into the economy if amended.

The talk also brought attention to the problem of society and the media’s extreme expectations of males to be super-masculine, powerful and dominant over women. It is these pressures that lead men to become “obsessed” with power so much so that seeking dominance “becomes a drug” leading to real addiction to sexualized violence and domestic violence. This ultimately creates a market for prostitution and sex trafficking, which has now surpassed the drug trade as one of the largest sources of income in international crime, second only to the sale of fire arms.

Steinen views pornography as playing a significant role in this social conditioning of males. She distinguished pornography — more about violence and male-dominance than sex — from “erotica,” which is more about mutual consent. She explained that a problem arises when pornography becomes the only form of sex education, particularly in communities where sex education in schools is restricted.

She clarifies, “Anti-porn does not mean anti-sex … I don’t know any feminists who are anti-sex.” She did not suggest a ban on pornography, but rather, a social penalty, such as that we have for anti-Semitic rhetoric or racist literature.

Stein called attention to the atrocities women face every day worldwide, such as male-child preference in China, genital cutting (which reduces women to nothing but a means of reproduction), honor killing and child marriages. She declared that the greatest determinant of whether a country will be violent inside of itself, or with another country, is not its religion or politics, but its violence against females. What happens is that people see it within their families first, which in turn normalizes violence against race and class. This will translate ultimately into military action. It is the root cause of a country’s mentality to be the best and to dominate other countries, in Steinem’s opinion.

“It all comes from that,” Steinem said.

Throughout her life, Steinem advocated for just about every minority and underrepresented cause out there. She explained that because society has made it so that “procreation is only okay when it takes place within a patriarchal model,” gay and lesbian rights advocates are usually women’s rights activists as well.

“We are beginning to realize that we are interdependent; that all social movements are connected … including environmental movements,” she explained.

During the Q&A session, a UCSB student, the only male standing in line, asked why there is a stigma around the word “feminist.” Steinem acknowledged, with a laugh, that it really doesn’t help to have Rush Limbaugh calling us “femi-nazis,” but that it is important not to be afraid of identifying as a feminist because it truly is a revolution.

“When we fail to stand up and support other women, we are saying something denigrating about ourselves” and that “if you don’t say it, you’re never going to know that 12 other girls are wanting to say the same thing.”

She asked the audience members to raise their hands if they identified as a feminist. The entire theater was filled with raised hands.

She ended the talk with a call to action, a kindling of the fire of hope for real change in the world, the kind of hope that excites human hearts. She is sometimes asked to whom she will eventually pass on her torch [[comma]] and said “I’m keeping my torch, thank you, and using it to light the torches of others!”

She urged the audience to understand the full circle of qualities that are human, not just “masculine” and “feminine;” that we are all “linked” rather than “ranked.” She ended with a powerful image of the human race as a bird – “the bird cannot fly if ones of its wings is injured.” In order to fly with both wings, we must break free from the prisons of gender.

“There are just a few ‘little’ things we can do, uh — Overthrow the patriarchy … Monotheism is part of the problem, capitalism, nationalism, just a few little things like that,” Steinem said to appreciative laughter. 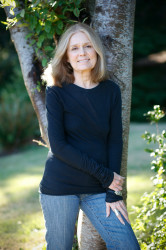 A version of this story appeared on page 11 of Thursday, February 20, 2014’s print edition of the Daily Nexus.

This is the officially coddled world-wide hate movement which those ‘progressive’ totalitarian tools at the Arlington worship: https://www.youtube.com/watch?v=iARHCxAMAO0