The Daily Nexus
News
Author, Staff Writer Gives Lecture on Dangers of Climate Change
February 19, 2014 at 5:00 am by Chris Ortega

Acclaimed author and staff writer for The New Yorker Elizabeth Kolbert delivered a lecture yesterday at Campbell Hall regarding her recent book The Sixth Extinction: An Unnatural History, which argues climate change will lead to a global extinction similar to the asteroid that ended the dinosaur age.

During the lecture, Kolbert discussed her interest and experience researching climate change, specifically in relation to the effects of carbon dioxide on the environment. Increasing levels of carbon dioxide, she said, will continue to worsen the global climate until we are faced with the sixth planet-wide extinction. But unlike the external cause of the last extinction — which was in the form of an asteroid — “We, humans, are the asteroid.”

According to Kolbert, her book seeks to highlight the human influence on climate change by citing ways in which we change the atmosphere and oceans, supporting these statements with examples of places she has visited and how they have been affected by carbon dioxide emissions.

“The oceans have absorbed roughly one-third of the carbon dioxide emitted since the start of the Industrial Revolution … Every four hours, the seas absorb another million metric tons of CO2. The net result is that the acidity of the ocean has increased by 30 percent.” Kolbert said. “Under these conditions, reefs will become rubble banks by 2050.”

Kolbert said humans have altered the planet by disturbing what naturalist, geologist and evolutionary theorist Charles Darwin referred to as geographical distribution, or the natural arrangement of animals across the planet.

“Another way that we are changing the planet is by moving species around the world,” she said.

However, the author also provided example of species that have been transferred from one area to another, including the Asian carp, emerald ash borer and zebra mussels. In this way, we are “creating a new Pangea,” she said.

Third-year political science major Alan Tam said the talk provided him with a better view of the way climate change is affected by human actions.

“Previously I just assumed that greenhouse gases was the major issue and had forgotten that people were also a major cause of species extinction like introducing certain species to a different environment,” Tam said.

Max Golding, co-founder of local climate justice organization 350 Santa Barbara, said the lecture could help convince people to participate in grassroots efforts that combat climate change, as he said everyone can contribute to such efforts by making small changes to their daily routines, such as biking more and eating less meat.

“We need more people from the bottom, and especially from the top, to act as if we are in a democracy where they can actually participate and change things,” Golding said.

“I just think that by spreading awareness, like she was doing tonight, was a great thing for UCSB students and the whole UCSB community,” Fleming said. 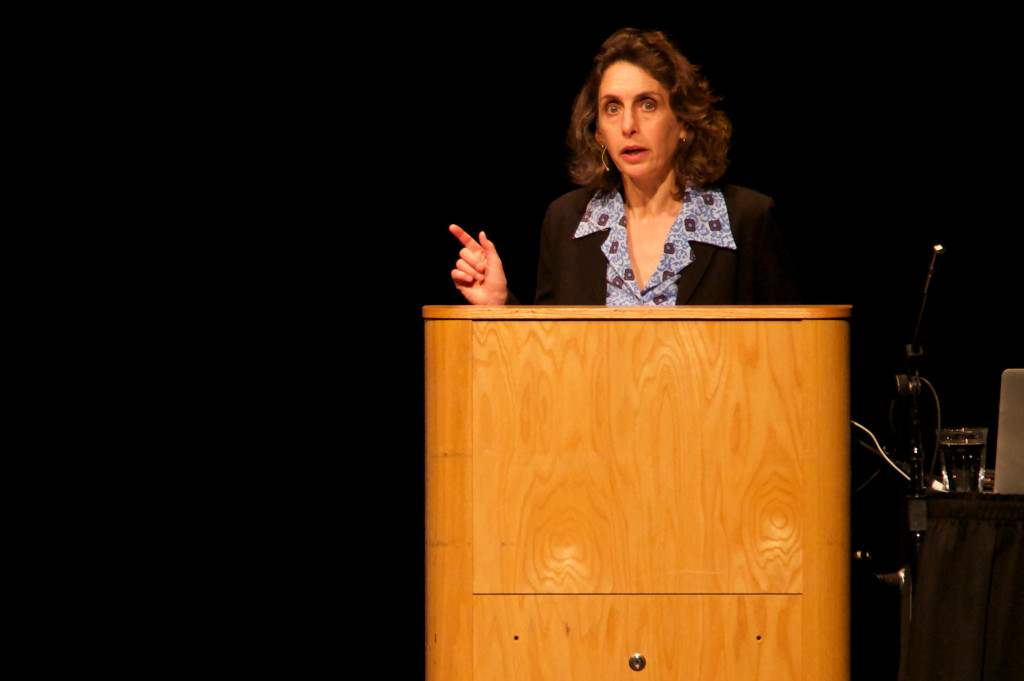 A version of this story appeared on page 4 of Wednesday, February 19, 2014’s print edition of the Daily Nexus.

Too many people are inclined to blame CO2 for global warming and acidification of the oceans. Co2 is a by-product of the burning of fossil fuels. Consider this. The primary purpose of fuels is to provide heat and they constitute 80% of all our energy consumption. The heat emissions alone are four times the amount that can be attributed to the measured rise in atmospheric temperature. This is fact! Where does the rest of the heat go? Some to the oceans, and some to the land perhaps, but it simply cannot be ignored! What then is the actual contribution from… Read more »

I was misquoted in this article. I immediately said after this quote that I now understood that the transportation of alien species to new environments by human beings was a major cause of this species extinction.

Hi Alan,
We originally had the full quote in the article, but the last part was taken out somewhere along the editing process. We’ve added it back now. Thanks for pointing it out.

This detail isn’t important, but I believe I said I was a senior CCS biochemistry major lol

Thanks Rachel, we’ve corrected it now.

i didn’t say anything the writer said i said. this is an example of realllly bad journalism.