The Daily Nexus
News
Vendetta of the Vivacious Vaginas
February 10, 2014 at 1:46 am by Jessy Diamba 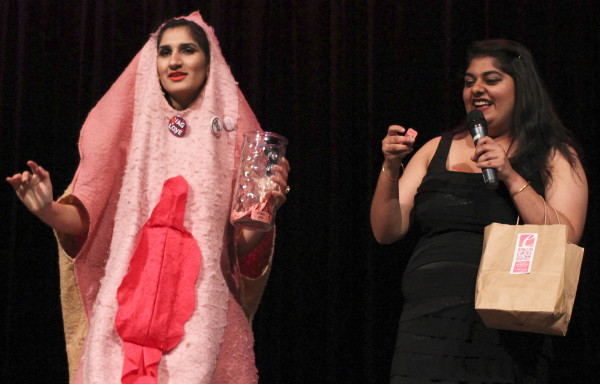 Eve Ensler’s Obie award-winning play The Vagina Monologues made an appearance at Campbell Hall this past weekend, marking the play’s 15th performance at UCSB.

With the venue packed with around 400 people, The Vagina Monologues featured a series of solo and group monologue performances done exclusively by women — with the performance including topics such as coming of age, pregnancy, rape, female genital mutilation and sexuality, amongst others. All proceeds from the event were donated to charity, with 90 percent gifted to the Santa Barbara Rape Crisis Center and 10 percent to the One Billion Rising Movement, a global campaign to end violence against women and girls.

The Women’s Ensemble Theatre Troupe, or WETT, is a student-run theater group responsible for putting on The Vagina Monologues every winter quarter as well as other productions throughout the year. The show, known to students as the “VagMo,” has been translated into over 48 languages and seen in over 140 countries. Promotion for the event began Jan. 26 with a Youtube and Facebook campaign, as well as costumed appearances by some of the actresses at the Arbor in days leading up to the performances.

WETT Co-President Nabra Nelson said she discovered the play during high school, which inspired her later involvement in the production. Nelson said she wanted a continued production of the play to generate discussion among UCSB students about the issues currently faced by women all over the world.

“I read about the Vagina Monologues in [my] high school library, and I read it through — from cover to cover — and thought, ‘I need to be in this one day,’” Nelson said. “My mission with the Vagina Monologues is to start conversation. I don’t care to change people’s minds; I just want people to start talking about these issues and then formulate their ideas via an educated opinion.”

Some pieces from last weekend’s show include a private recollection of childbirth, “I Was There in the Room,” an individual discourse on female pubic hair entitled “Hair,” and the performances “My Vagina Was My Village” and “When I Was Twelve.”

First-year WETT member Bridget Kyeremateng, who wrote and performed the original piece “Diary of an Angry Black College Student”, said her involvement in the play led her to learn more about activism in women’s issues and gave her a venue to express her perspective on being an African American student.

“I’ve been learning a lot about feminism, womanpower, and the influence that acting can give through women,” Kyeremateng said. “I’ve also learned about the underrepresentation of African American women throughout UCSB and more so other colleges, and wanted to shed light to that in my student-written piece.”

“Diary of an Angry Black College Student” was written in response to how Kyeremateng felt as an African-American student in a predominantly white university, she said.

“We’re used to being scrutinized due to our color, and people forget that we, too, are human beings that want the same thing: equality,” Kyeremateng said.

Fourth-year student and WETT member Stacey Brizeno described the Vagina Monologues as “spicy” and said she participated because she wanted more people to know about the day-to-day experiences of being a woman in a post-modern society.