The Daily Nexus
News
A.S. Hosts Panel of Politicians to Discuss Education Funding
February 10, 2014 at 1:36 am by Wyatt Smith 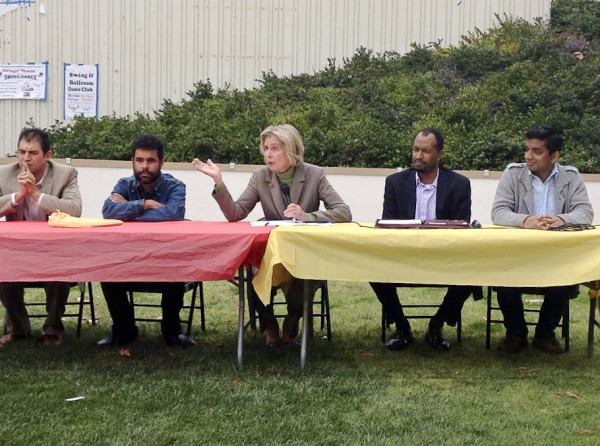 Last Friday, Associated Students hosted a forum on the SRB lawn as part of Week of Revenue, an event focused on promoting student discussion on the issues of student debt, marijuana legalization and the possibility of an oil severance tax.

Second-year anthropology major and campus organizing director for Academic Affairs Carlos Lopez said he created the event to generate discussion about how to fund higher education in California.

“We wanted to pick topics that help deal with the issue of student debt so we chose to address marijuana legalization, feeling it would have some traction with the student body already, and promotion of an oil severance tax, like [the ones] in Alaska and Texas, where a majority of the money taken from that tax helps fund their higher education systems,” Lopez said.

According to Lopez, Larimore-Hall was to the panelist who fully supported marijuana legalization, and the other three seemed generally positive about the idea while not explicitly expressing their support. Lopez said Capps in particular noted that Colorado and Washington provide trial grounds upon which to base further evaluations.

External Vice-President of Statewide Affairs Alex Choate supports both legalization and an oil severance tax, which she feels would provide a more sustainable revenue source to fund higher education.

“Unlike an oil severance tax, taxation on marijuana will not be a declining revenue source,” Choate said. “So it could provide more money long-term for California higher education.”

“I think a big part of what is going to make it difficult to pass oil legislation is because we’re the last major oil-producing state without an oil severance tax, so oil companies have a huge interest in keeping oil in California as cheap as possible,” Lopez said.

The panel had no conservative representatives, despite Lopez’s efforts to reach out to three self-identifying Republicans. However, Lopez said he believes conservative politicians may have avoided attending the panel for political reasons.

“A lot of it was scheduling conflicts, but I think the subject matter and location played into it,” Lopez said. “Because if you’re a Republican coming to Santa Barbara to talk about marijuana and oil taxes, that’s not exactly the most friendly environment.”