The Daily Nexus
News
Christian Groups on Campus Sell Clothes to Fund Missions Overseas
February 4, 2014 at 12:10 am by Jackson Kerr 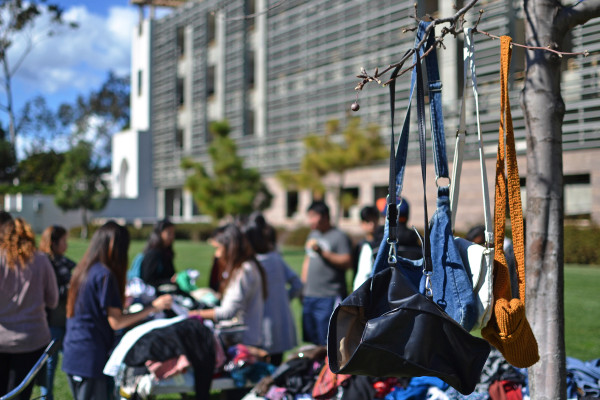 Clothes will abound today from 10 a.m. to 5 p.m. in Parking Lot 22, where members of Epic — an Asian American Christian group on campus — and the nonprofit organization Campus Crusade for Christ plan to flag down passerbys and tell them they would look good in various items of used clothing.

The so-called closet sale, which began yesterday, is being held to raise money for members of Epic to put funding towards charity missions in the U.S. and abroad — such as Japan, San Francisco, San Diego, Hawaii and Puerto Rico. The sale invites people to drop off unwanted items from their closets and browse through a variety of items, from handbags to men’s and women’s clothing.

Epic member and English major Esther Oh came up with the idea for the closet sale when another girl she knew held a closet sale via Facebook to raise money for her mission trip.

“She sold a bunch of cute stuff from her closet [and] … it raised a good amount of money,” Oh said.

Oh held her own Facebook closet sale shortly afterwards and, when it was a success, decided to bring the closet sale to UCSB.

“I made $100,” she said. “I said we should do a big sale for everyone in our organization, instead so I posted on Facebook to tell people to bring clothes back that you don’t want anymore, and we can sell them in a closet sale.”

Soojan Ro, an Epic member and psychology and education double major, said she and her friends had a lot of clothes at their homes away from Santa Barbara, where they were sitting in closets. They decided their clothes could be put to better use.

“We brought it all out together, and it turns out we have a butt-load of clothes so we were able to donate our stuff,” Ro said.