The Daily Nexus
News
UCen Evacuated Due to Smoke From Faulty Motor
January 30, 2014 at 5:00 am by Staff Report

The University Center was evacuated yesterday afternoon after a broken motor in the building’s duct system filled the area around Panda Express with smoke.

The building’s fire alarm was set off at approximately 3 p.m., and Santa Barbara County Fire Department personnel responded to the scene shortly after. The UCen was reopened at around 4:20 p.m. after the smoke had dissipated.

Fire Engineer Rick Pinal said the malfunction was caused by worn-out bearings in the motor and did not cause a fire.

“It put out a substantial amount of smoke, and so one of the workers that was going off-duty tripped [a] switch which turned the power off to [the motor], which stopped putting out smoke,” Pinal said. “But when we arrived there was still a good amount of smoke in here, so we went ahead and opened [the duct] up.”

According to Pinal, firefighters were able to confirm the source of the problem using a thermal imaging camera, which revealed heat in the duct through colored temperature differentiation.

“That’s not a typical bearing or burnt-out belt smell, that’s more of a rubbery smell, so I thought it was food, so I thought maybe it was pulling the smoke from somewhere [else], but that’s not what it was,” Pinal said. “We rarely have any issues here.” 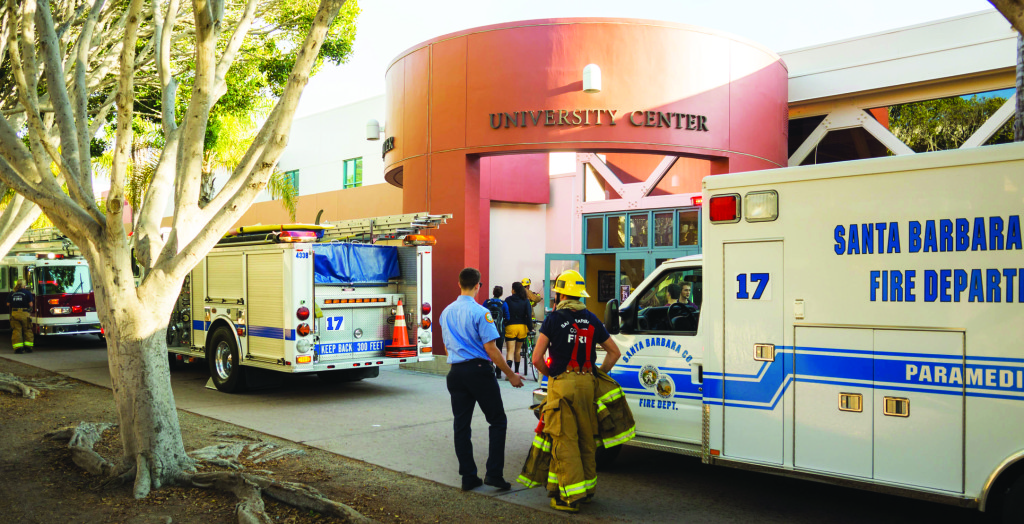 Firefighters responding outside the UCen yesterday afternoon. A fire alarm was pulled due to smoke, but on investigation there was found to be no fire.

A version of this story appeared on page 3 of Thursday, January 30, 2014’s print edition of the Daily Nexus.