Yesterday’s discussion was the first web chat in a series Napolitano plans to hold with students, faculty and staff in an effort to “be in touch with students,” as she said during the event. The panel featured UCSB student and Student Veterans Organization President Paul Malone, UCLA Daily Bruin reporter Kristen Taketa, UC Student Regent Cinthia Flores — who is also a UC Irvine law student — UC Student Association Board Chair and UC Berkeley student Safeena Mecklai and UC Riverside graduate student Lewis Luartz.

Flores — who commended Napolitano on her recent financial allocation for professional, graduate and undocumented students — asked about the UC president’s plans to provide a “similar commitment for high school and undergraduate students.” According to Napolitano, along with the $5 million allocation for undocumented students, the UC is also working on creating a student-based online portal system that walks transfer students through the process of transferring from the community college to the UC.

“We’ve been planning meetings at the technical level right now to see what it would take to unify databases for community colleges to the UCs to be more student-oriented and student-focused in that regard,” Napolitano said.

According to Malone, who spoke on behalf of the Student Veterans Organization, 62 percent of student veterans are first-generation college students while 98 percent of veterans at UCSB are transfer students. In light of this, Malone asked if it “would it be possible to put up a D.O.D. [Department of Defense] liaison to help with the … transition from boots to books.”

In response, Napolitano said the UC is working to start a Student Veterans Advisory Council to track student veteran issues and “add the weight” to her office, along with other focus student groups she plans to work with, such as undocumented students.

“I’d been thinking more about outreach to D.O.D. and Veterans Affairs in Washington D.C.,” Napolitano said, “But bringing it home to bases here…that’s an excellent idea. Let me see what it will take to enable us to do that.”

In addition, Mecklai discussed UCSA’s efforts to “reinvest in higher education,” with campaigns advocating Proposition 13 reform and the oil severance tax, along with lobbying in Sacramento for more federal support for higher education. After Mecklai asked about how the UC is implementing “innovative ways to encourage reinvestment by the state into the UC system,” Napolitano said that she hopes to work toward increasing funding for the UC. However, she accompanied her enthusiasm with a small disclaimer, saying her position “did not come with a magic wand.”

“That’s ideally what you’d like to have, but I believe we need to have serious discussion throughout California about the value of the University to the state of California and its long-term ability to thrive,” Napolitano said. “It’s a unique institution. There’s nothing like it in the other states, but to keep it unique requires sustenance and … really aggressive support.”

According to Napolitano, she’s doing a lot of “the traditional things” such as talking to Governor Jerry Brown and his staff, while also reaching out to “the public at large” and looking into private philanthropy.

“We can’t depend on that … [but] we are reaching out already and thinking long-term,” Napolitano said. “I’m meeting with a group of undocumented students this week again to go through where we are, what we’ve done … and then to get further ideas and suggestions for long-term enrollment planning.”

“I’m also looking forward to doing similar chats … as a way to really help supplement what I can physically do in terms of getting out to campuses and conducting face-to-face meeting,” Napolitano said. 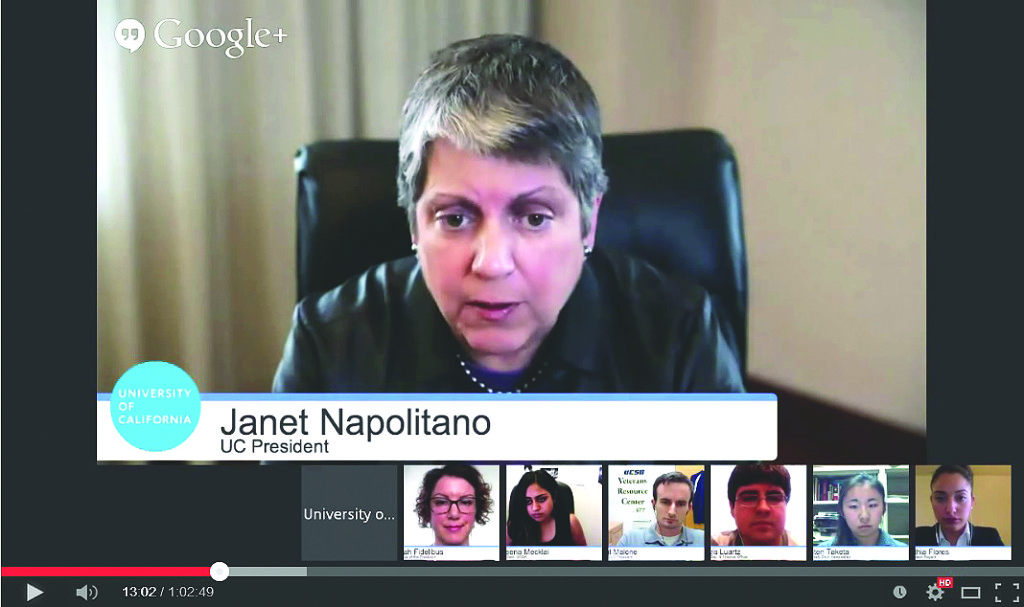 Photo Courtesy of the University of California.

A version of this story appeared on page 5 of Wednesday, January 29, 2014’s print edition of the Daily Nexus.