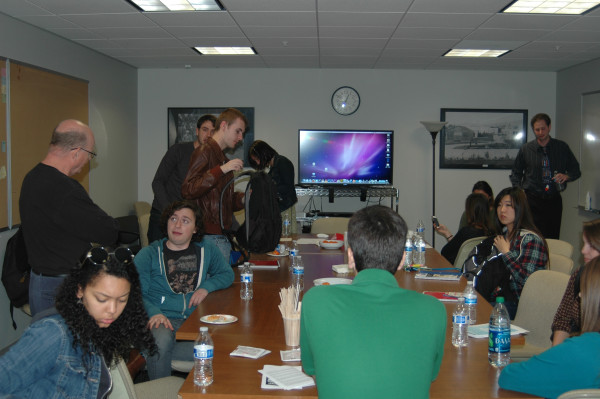 The UCSB Film and Media Department held its 11th annual Word Farm, a three-day screenwriting seminar at the Social Science and Media Studies building, where UCSB students and alumni got a chance to learn from prominent screenwriters in the film industry.

Featuring high-profile screenwriters such as Jane Espenson, a writer on “Game of Thrones”, “Battle Star Galactica” and “The O.C.”, as well as Dan O’Shannon, a writer on “Modern Family”, the event covered topics like breaking into the business, television and film writing, pitching scripts, industry networking, managing common obstacles and producing one’s best work. During Word Farm, students attended eight out of sixteen different discussion sessions, each led by different guest professionals. This year, the 31 participating students, who all submitted a sample of their work during the application process, were able to personally converse with well-respected writers.

According to Joe Palladino, academic advisor for the Film and Media Department, due to the guests’ high profiles, Word Farm is kept relatively secret and only those who are serious about screenwriting are encouraged to attend. He emphasized the unique opportunity it offers for students to learn from industry professionals in a small setting.

“There is a creative writing expo in Los Angeles, where you get maybe half the amount of people talking about screenwriting to a group of about 3,000 people a room. Some of these people [that were speakers] such as Jane Epsensen, Dan O’Shannon, you’ll probably pay about $300 just to hear them talk so there will be a thousand people in this room,” Palladino said. “Here you get 16 people [per room].”

Palladino started the Word Farm program in 2003 after he saw the creative potential screenwriting had for students, emphasizing its nature as a low cost element of filmmaking.

“Screenwriting is the one thing [film] students can do without the need for equipment. They didn’t need to go to a lab and they could put their creative ideas into work,” Palladino said. “So we went looking for a way to encourage more students to get into screenwriting and show students what the world of screenwriting is like, and also get a chance to network with those professionals at school.”

UCSB Theater alumnus Lee Weinsoff said that she was very excited to able to learn from Epsenson, who she holds in high regard.

“I felt like, with perseverance and luck, a career like this is possible, which is really exciting,” Weinsoff said. “I won’t feel any more confident about my career until I start working on scripts more, but I have an understanding that spending time working won’t go to waste.”

Chris Marchant, a UCSB exchange student from England studying film, said he benefited from the seminar’s well-known speakers, coming away more motivated to hone his craft and make a career out of his screenwriting.

“Highlights included the chance to speak with speakers as varied as Academy Award winner Dean Pitchford and UCSB alumni finding their feet in the industry, Omar and Mia,” Marchant said. “Perhaps the most memorable moment for me, was when Tom Lazarus took a real interest in my feature film script and agreed to take a look at the first 10 pages.”

According to Palladino, the Word Farm program has produced successful UCSB film artists who go on to have promising careers in the film industry, and he wants to see this trend continue. This year Palladino welcomed back Omar Najam and Mia Resella, former UCSB students and the creators of “2 Broke Geeks”, a geek culture channel on YouTube.

“It’s working. Students who are going through this program are going out there and writing,” Palladino said. “So students out here are getting inspired to just go a little bit further.”

Michael Miner, one of the writers of the “RoboCop” film series who teaches screenwriting at UCSB, said he encourages all students to work on something they are passionate about.

“Work on something you care about so that when you are done, you have no regrets,” Miner said.