The Daily Nexus
News
UCSB Adds Housing for Future Students
January 27, 2014 at 1:54 am by Wyatt Smith 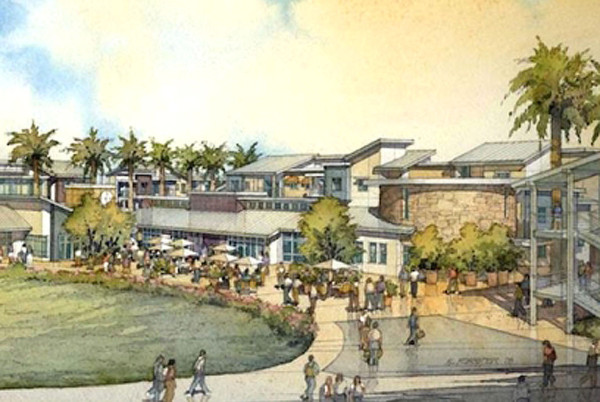 An artist’s impression of how the Sierra Madre Apartments,
under construction on Storke Rd, will look when completed.

Construction on a new UCSB housing complex near the West Campus Apartments on Storke Road is currently underway and due to be completed in Fall Quarter of the 2015-2016 school year.

The complex, called the Sierra Madre Apartments, is organized by Housing and Residential Services and will provide 115 new apartments to accommodate 515 students, with an additional 36 units for faculty and staff families. The units will range from one to three bedrooms, each of which will house two students.

The new housing is part of the university’s long-range development plan, which includes the expansion of enrollment from 21,000 to 25,000 students by the year 2025. The apartments are being funded entirely by Student Housing, using a combination of their reserves from student rent, dining and conference servicing as well as debt, which will be financed by future student rent.

Second-year biopsychology major Daniel Lifton said the project is exciting due to the extra housing space it will allow for students and the potential for growth that it presents.

“I think that the new Sierra Madre housing will be a positive change to the UCSB community,” Lifton said. “It will definitely increase the UCSB population.”

According to Barry Colwell, UCSB Associate Director of Building Development and Resource Planning, the Sierra Madre Apartments are designed to earn at least “gold certification” in Leadership in Energy and Environmental Design (LEED), which is a federal standards system that rates buildings based on their environmental friendliness by using guidelines set by the U.S. Green Building Council.

Colwell is also a LEED Accredited Professional, meaning he can register and work on the process of consulting to get certification. He said certification involves many aspects of the construction process, which is accumulated into a point system that determines the level of certification.

“It takes into account a lot of prerequisites and standards, like energy optimization of the building, green cleaning products [and] your waste,” Colwell said.

Despite the “gold certification” minimum, Housing and Residential Services aim to earn “platinum certification” — the highest rating — that has already been achieved by Bren Hall, which received double platinum rating for new construction as well as operations and management. According to Colwell, although there is a wide gap between gold and platinum certifications, Housing and Residential Services has had little problem earning gold ratings in the past.

“We have a lot of gold. Santa Rosa was gold renovation, Anacapa is on track to be gold any moment and Santa Cruz is pushing for platinum,” Colwell said. “San Clemente is double-gold, the only double-gold apartment complex of its size in the world.”

Teal Coppock, a second-year environmental science major, said he was glad to see Housing and Residential Services aim for a high LEED rating, given the environmental concerns of students on campus.

“It’s really important to a lot of us at UCSB that we be a part of an environmentally conscious campus,” Coppock said. “It’s good to see that university policies are reflecting that desire.”

In order to further facilitate the expansion of the university’s undergraduate population, the San Joaquin Apartments will begin construction behind Santa Catalina within the next few years and are scheduled to be completed by 2017.

Housing and Residential Services expects the two new apartment complexes to create a shift of the population center toward the west end of Isla Vista. In preparation for this coming change, Housing and Residential Services is in negotiations to increase the frequency and expand the hours of bus services to campus, the airport, train stations and downtown, according to Colwell.

“You’ll see shortly that there’ll be more busses, and they’ll be running late because we’ve discovered also that late night on campus is a big deal,” Colwell said. “A lot of people are coming to the library, and our dining commons are open later, but the busses sometimes don’t run so we’re working really hard with Metropolitan Transit District, and we’re really close to finishing the contract on that.”

A version of this article appeared on page 3 of January 27rd’s print edition of the Daily Nexus.