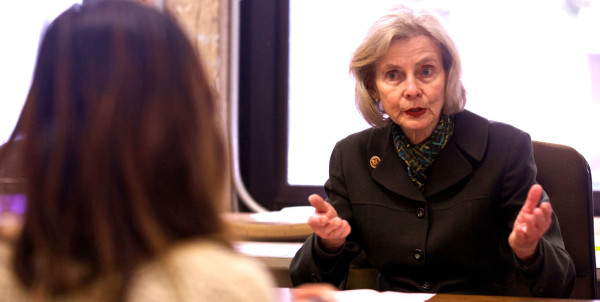 Congresswoman Lois Capps, pictured, received an M.A. in Education from UC Santa Barbara in 1990 and now campaigns for higher-education funding and environmental issues, among other causes.

The Daily Nexus sat down with UCSB alumna, former Santa Barbara public school nurse and current U.S. Representative for California’s 24th congressional district Lois Capps to discuss her history with UCSB, her views on the state of higher education, her advocacy for sustainable energy and her support for student veterans. Capps, who has spent 20 years of her life as a nurse, received her masters at UCSB and married the late UCSB religious studies professor Walter Capps — who was elected to Congress in 1996 and died nine months into his term before Lois Capps was elected in 1998 — spoke extensively about her support for education, health care and renewable energy.

DN: So you went from being a school nurse to a congressional representative?

Capps: That’s an understatement … I talked to a lot of women about running for Congress, I talked to a lot of nurses. The first thing I heard was, in letters to the editor and various things, “What are you doing you’re running for Congress? You’re just a woman, first of all, and you’re just a nurse!” I thought to myself, “Okay, I’m a school nurse. Where do I spend my life? With education and with health care. What do people care about? Those two things.” So we just talked to a lot of people about what they cared about, and actually it turns out people trust nurses. I traded a very respectable job for one that nobody cares about at all. We’re down at the very bottom in the values — members of Congress. Oh gosh, worse than car salesmen!

DN: Given recent tuition hikes for UC and Cal State campuses, student loan debt is an increasingly alarming issue. Could you tell us about how you’re working to lower this debt or keep more students from having to carry high debt costs?

Capps: Making [loans] affordable is a no-brainer, to me. If you make a barrier for getting a loan, it can keep a lot of people from trying to get one, and that may mean the difference between applying or not … I think it’s about any kind of grant opportunity, like having more funding for the basic sciences so that people can apply for grants, and making the college experience more affordable, for more people … The goal in the state for California was always no barriers between every citizen and the opportunity to go as far as you want to go.

DN: How do you feel about the budget just passed by Governor Brown in regard to higher education?

Capps: I’m jealous of the state, frankly. I wish we could do things like that. He’s in a good position of having funding, but he also expresses bias toward education, which is pretty fabulous. I don’t know what that means for other organizations that didn’t get attention, but good for him! More power, right? … When you make education the crown or real core of the function of the state, that other stuff just flows. I married a college professor, so I am kind of biased that way. But it seems like there was once this determination that there would be no tuition at a community college, and there wouldn’t be all these fees that we do have to pay now. Now, the cost has gone up, so it’s really hard to make that work, but I think that should still be the goal.

DN: Why do you think there is such a resistance to push for higher education?

Capps: Competing interests for one thing, no elected official is every going say, “I don’t like education,” but they do point to cost, point to “Why does everybody have to go to a UC?” You hear those kind of biases. Our military industrial complex is a huge part of our funding scheme. It comes from complacency or a status quo and a huge lobbying effort.

DN: There’s been some talk about fracking in Santa Barbara County. What do you think we can do to advance this debate?

Capps: We have almost all the offshore drilling in California off this coastline. Vandenberg Air Force Base was considering some offshore drilling and I wrote them a letter and said, “I need to remind you of the history of this place. We don’t do that here.” New drilling reservoirs have been discovered offshore, and they want to do some of the drilling off UC, right here at Coal Oil Point. So it’s sort of never ending, that competition … Renewable energies are going to come off the college campuses, in research groups. But we have to figure out how to do it in a cost effective way. We need to really stimulate the development of sustainable energy sources.

DN: How much federal support is there for renewable energy at the federal level?

Capps: Not enough. There’s a few people like me who get looked at like we’re nuts. Parts of the country — coal and gas areas — are so invested by lobbyists. Everywhere you turn, you bump into one of these oil or gas lobbyists. We haven’t really figured out how to move forward, but we can.

DN: How are you working to help veterans in higher education?

Capps: I want to be a resource for them … This is a larger and larger number of people as we pull troops out of Afghanistan … I support moving out of Iraq and Afghanistan, but also, they need their skill building. They’ve never been to college, some of them, so there’s got to be a welcome and a way for them to access the university, and I want to be of support to that. I want to have our Congress on record as supporting that as well.

A version of this article appeared on page 1 of January 27rd’s print edition of the Daily Nexus.