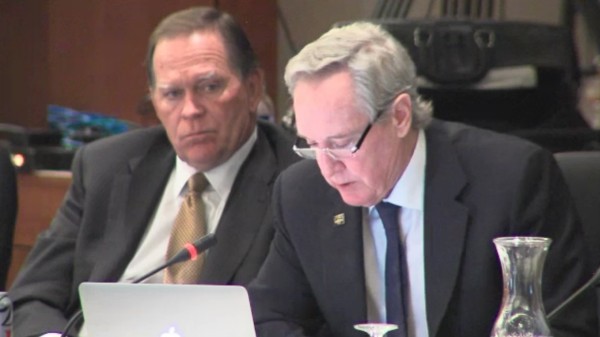 At yesterday’s meeting at the UC San Francisco Mission Bay Conference Center, the University of California Board of Regents discussed the issue of sexual assault against women on UC campuses, salaries for UCSB basketball coach Bob Williams and new Executive Vice Chancellor and Provost at UC Berkeley Claude Steele, amongst other topics, while UC President Janet Napolitano commemorated a number of UC students on receiving notable academic recognitions.

The meeting began with public comment, which featured a statement against the newly-shortened winter break, as well as a statement regarding support for transfer students by UCSB third-year global studies major AJ Valenzuela. Later in the meeting, Regents discussed the six-figure salaries of faculty at UCSB and UC Berkeley and not all Regents were supportive of the hefty paychecks.

Regent George Kieffer outlined the salaries for UCSB basketball coach Williams, the UC Berkeley diving coach David Durden and new UC Berkeley Executive Vice Chancellor and Provost Steele. According to the report by Kieffer, Williams will receive approximately $314,000 with annual increases of 4.2 percent thereafter for the term of his contract and with incentives that will increase to a maximum potential of $225,000. In addition, Steele will be provided an annual base salary of $450,000 for automobile allowance, a relocation allowance of $112,500 and a hiring bonus of $22,500 “in addition to standard benefits and relocation reimbursements.”

“This is compensation for moving from Stanford, where he was making $615,000 per year, plus additional benefits that were far in excess of that,” Kieffer said.

Lieutenant Governor Gavin Newsom expressed concern with Steele’s pay and said “it’s a 41 percent raise above and beyond what we’re currently paying the Provost,” and that “it’s more than any other Provost in the entire system.” According to Newsom, Steele’s pay will “put wage pressures on executive compensation” and potentially risk increased tuition.

“I am one of tens of thousands of students who have made it from a California community college to a UC this past year,” Valenzuela said. “As a CC student, I found online classes useful while I was taking 22 units and working two jobs as a bus boy and at a yogurt store.”

UC San Diego External Vice President of Statewide Affairs Vanessa Garcia spoke in support of a petition protesting the new change to a two-week winter break, which was made in order to coincide with the Jewish holiday. The document was uploaded onto www.change.org and is currently circulating amongst UC students. If implemented, this change will pose a challenge to international and out-of-state students traveling to see their families “during a very expensive time for travel,” she said.

“It does not allow for students to adequately decompress from the strenuous time of … a 10 week system that is very challenging to the student both physically, mentally and academically in every way,” Garcia said. “A lot of students feel their own religions are not being accommodated by this change.”

During the internal audit activities report, Regent Charlene Zettel discussed President Barack Obama’s recent formation of a task force around sexual assault on women on college campuses in association with the UC’s efforts to combat sexual assault at California universities.

Concluding the meeting, Napolitano spoke about a number of UC students and student groups who have been awarded grants and scholarships in fields in the humanities and science.

“When you hear me say that we teach for California, and we research for the world, these are some of the extraordinary men and women I’m referring to,” Napolitano said.