The UC Board of Regents will meet today at the UC San Francisco Mission Bay Conference Center to discuss issues such as online education and the expected budgets for both federal and state funding to the UC next year, with Governor Jerry Brown currently promising to increase state funds to the University by $142.2 million.

In regards to public funding, university officials have asked the state for $120 million more in state funds than what Governor Brown is currently proposing, and the University is also asking for an increase in federal funds. While the UC received over $8 billion in federal money last year, university officials are saying the statewide system needs more, as there was a $345 million drop in federal research funding between the 2011-2012 and 2012-2013 school years. In addition to discussing system-wide and campus-based issues alike, today’s meeting will touch on three topics that hit close to home for UCSB: a revision of the California Master Plan for Higher Education — an effort spearheaded by UCSB students — an update on the status of the meningitis outbreak at UCSB and an approval of financing for UCSB’s San Joaquin Apartments.

Regents will discuss an update on the 2014-2015 federal budgets during the Committee on Finance session, and according to the meeting’s agenda, the UC is estimated to receive “more than $8 billion in total federal support for the University’s educational, research and health care enterprises” during this school year, which includes money for program support, student financial aid and patient care.

However, this number marks a 12 percent drop in federal research funding due to the 2011 Budget Control Act and Sequestration — a mechanism for automatic spending cuts put in affect last March to reduce federal spending. In response to these cuts, UC President Janet Napolitano and all the UC Chancellors have sent a letter asking Congress to repeal the sequester and complete a 2014 budget in support of UC’s funds for research and financial aid.

During the Committee on Health Services meeting, the Regents will discuss “the status of the meningitis outbreak and vaccination process at UCSB” as a part of its update on UC health issues.

Additionally, the Committee on Education Policy will discuss, among other items, a progress report on UC online education and discussion of invigorating the Master Plan for Higher Education.

In regard to online education at the UC, funds have been awarded to faculty on all nine campuses to develop 30 online undergraduate courses to be offered across multiple campuses throughout the academic year, including a Maps and Spatial Reasoning course, an Organic Chemistry Course and a Structural Analysis Course at UCSB.

Concluding discussion by the Committee on Education Policy will include dialogue about the invigoration of the 1960 Master Plan for Higher Education, which outlines the distinct missions and general policies for higher education in the state. According to the Regent agenda, “the heads of each of the public higher education systems in California” will come together to talk with the Regents about ways to “invigorate” this plan as it passes into the second decade of the 21st century.

Lastly, when the Committee on Grounds and Buildings meet, they will discuss approval of budget, approval of external financing and approval of design following action pursuant to California Environmental Quality Act for the San Joaquin Apartments to be built near the Santa Catalina residence halls to be completed from 2016 to 2017. 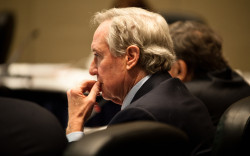 Photo by Kenneth Song / Daily Nexus.
A version of this story appeared on page 3 of Wednesday, January 22nd, 2014’s print edition of the Daily Nexus.