The Daily Nexus
News
Get Outdoors: Campus Clubs Offer Adventure
January 9, 2014 at 5:00 am by Aditya Tadanki

Trade the Blackboard for a Surfboard: Opportunities for Once-In-A-Lifetime Experiences are  Explored with UCSB’s Scuba and Freediving Club, Snow Club and Excursion Club.

It is no secret that many students here at UCSB chose the school for non-academic reasons. With sunny skies and nature all around, the location can be argued as second to none.

Because of the diversity of land near our campus, many clubs have taken advantage of these elements by providing outdoor activities of all sorts for students to participate in. Some of these clubs include the Scuba and Freediving Club, Snow Club and Excursion Club.

The Scuba and Freediving Club organizes diving trips along the Santa Barbara coast. Kyle Swentowsky, a fourth-year cell and developmental biology major and the president of the Scuba and Freediving Club, said he was first introduced to scuba diving by his father when he was 13 years old. According to Swentowsky, students do not need to be seasoned veterans in order to join the club.

“Our club is about 50 percent experienced divers and 50 percent newcomers,” Swentowsky said. “We definitely recommend any experience level to join.”

Swentowsky said he encourages any interested students to not feel intimidated by the membership fee and “just dive in” to take part in a collection of experiences the club members share.

“We were at Santa Barbara Island last year and we went on four dives,” Swentowsky said. “During the last one, there were literally 30 sea lions following us while we were swimming. It was absolutely amazing.”

The club meets every Wednesday at 7:30 p.m. in the Marine Science Research Building Auditorium. Membership fees are $35 for the academic year, and members can sign up at any meeting during any quarter.

This past winter break, 30 members of the club traveled to Colorado to ski and snowboard for four days with students from other UC campuses. According to Alisa Rastorgueva, a first-year undeclared major and member of the club, the trip provided an invaluable bonding opportunity for members.

“Our Colorado trip over winter break was amazing because we literally just took over the mountain,” Rastorgueva said. “There were 30 of us coming down at the same time. It was really something to be seen.”

According to Rastorgueva, the Snow Club not only gives members an opportunity to practice their snow skills all year round, but also allows the team to connect with each other on a personal level.

“The Snow Club was great for me because we all know each other really well and we all have a lot of fun with each other,” Rastorgueva said.

The membership fee is $30 and the club can be found at the Arbor from 10 a.m. to 2 p.m. on Monday through Friday. No tryouts are necessary in order to join, and the club accepts members of all skill levels.

The Excursion Club allows students to participate in a variety of outdoor activities — including kayaking, hiking, surfing, yoga, spear fishing and dirt biking. Founded in 2003, the club holds an average 20 to 30 trips a week.

According to Matt Rich, fourth-year biology major and Excursion Club Director, members can take part in single-day or multi-day trips and receive mentoring from fellow members on surfing and other sports. They can also borrow equipment such as paintball guns, climbing shoes and surfboards for their own personal outings.

“I think people that want to get involved should just start attending meetings,” Rich said. “There are things for anyone.” 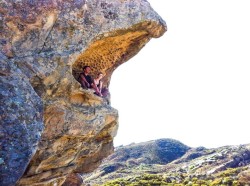 Photo Courtesy of the Excursion Club

A version of this story appeared on page 10 of Thursday, January 9, 2014’s print edition of the Daily Nexus.