The ASA, an organization dedicated to the “interdisciplinary study of American culture and history,” organized a boycott of Israeli academic institutions based on the Israeli occupation of Palestine. The organization views Israeli academic institutions as “complicit” in the “denial of the rights to full education and academic freedom to Palestinians” as “guaranteed by international law,” according to their site. In December, Napolitano denounced the statement and denied any possibility of the UC system joining the ASA’s boycott, citing the UC’s commitment to a free exchange of ideas and partnerships with a wide variety of academics.

The statement divided students and campus organizations, reigniting last year’s debate surrounding a UCSB Associated Students resolution that would have supported a divestment of Israeli-based companies that hold business relations with the campus.

“I reject it in the strongest possible terms,” Goodman said. “Just as I encourage open dialogue between Jewish, Christian, Muslim and all kinds of students, I want a free exchange of ideas among academics … Academic boycotts are antithetical to the work of a university. Scientific and other intellectual breakthroughs are made possible by academic cooperation, not through restrictions.”

However, on-campus organizations such as Students for Justice in Palestine disapprove of Napolitano’s decision to reject the boycott. Speaking of behalf of SJP, fourth-year political science major Katlen Abuata said the University should comply with ASA’s boycott and added that Napolitano’s statement is not representative of the student population. Abuata said the UC president’s voice is not necessarily representative of all the University’s students, in light of many protesting her lack of a professional background in education, amongst other issues.

“Napolitano, the newly appointed University of California President, does not represent student voices,” Abuata said. “Backlash following her appointment illustrates the disapproval by a wide array of students.”

Abuata also said that by rejecting the Israeli boycott, the UC President continues to uphold the current suppression of academic freedom in Palestinian academics.

“Israel’s occupation of Palestine has prevented collaboration with Palestinian academics, innovators and artists, and Napolitano’s rejection of divestment or boycott resolutions stifles these productive dialogues that encourage critical thought and action,” Abuata said.

However, President Napolitano does not stand alone in rejecting the academic boycott. A website called Legal Insurrection which counts the number of universities across the nation rejecting the boycott, currently lists 145 universities — including UCSB and other individual UC campuses. 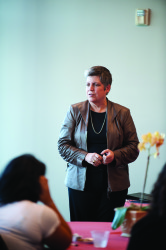 The American Studies Association’s call for an academic boycott against Israel fails to garner support from UC President Janet Napolitano (above).

A version of this story originally appeared on page 3 of Wednesday, January 8, 2014’s edition of the Daily Nexus.

Thank you to Cole and the Daily Nexus for sharing this news. Two notes to add. First, Chancellor Henry Yang has also issued his own statement on behalf of UCSB rejecting this boycott as being entirely against the principles upon which our university operates. You can find his statement here: http://santabarbara.hillel.org/home/aboutus/blog/blogpost/14-01-07/SB_Hillel_Applauds_Chancellor_Yang_s_Rejection_of_ASA_Academic_Boycott_of_Israel.aspx. Second, even Palestinian President Abbas has come out against boycotts such as this, saying that Israel and the Palestinians are partners in seeking peace. Nearly all leading universities in the US have already rejected this anti-Semitic singling out of Israeli universities, and I am glad that UCSB maintains close… Read more »

Supporting the state of Israel means supporting the systematic ethnic/racial suppression of the indigenous people of Palestine. Nelson Mandela and the African National Congress, Steven Hawking, Alice Walker, Elvis Costello, Roger Waters all support Boycott, Divestment, and Sanctions (BDS) of the political structure (state)of Israel until 1)The basic human and civil rights of the Palestinian people are respected, 2)The State of Israel ceases its illegal occupation of Palestinian land, and 3)The lawful return of the refugee population under international law. Israel does not allow academic freedom to Palestinian activists. President Abbas is not a democratically elected leader. Of course the… Read more »

The international community has persistently condemned the settler-colonialist situation in Palestine. One of the main reasons for instability in the Middle East is due to Israel’s excessive use of military force to resolve both regional and local disputes. The systematic expulsion of Palestinians from their native land keeps adding fuel to the fire. The boycott is essential because, contrary to what Napolitano and others claim, it demands academic freedom. Palestinian scholars, intellectuals, and even school children are limited to fully enjoy academic resources due to both physical and legal barriers. When children are unable to attend school due to checkpoints.… Read more »

Whether it relates to intergroup or interpersonal relations in general, or the Israeli-Palestinian situation in particular, my goal is to bring people together to find a solution where everyone wins. One would have hoped that the ASA as well as the commentors on this article might have taken a similar approach. Rather than dispute each point in the comments section, in the interest of academic discourse, I will share this cogent analysis of the ASA boycott and its implications. It is a little bit long for this space, but is well worth reading to gain a nuanced understanding. It’s written… Read more »

Palestinians are being starved to death. But this is not happening in the West Bank or Gaza Strip. Nor is it taking place in Israel. Rather, this is happening in an Arab country, Syria, while the international community continues to turn a blind eye to the tragedy. At least 15 Palestinians have died from starvation since last September in the Palestinian Yarmouk refugee camp near Damascus, according to the United Nations Relief and Works Agency (UNRWA). UNRWA spokesman Chris Gunness said, “We have received reports over the weekend that at least five more Palestinian refugees in the besieged refugee camp… Read more »

Since its inception in 2005, the BDS movement and its founder, Omar Barghouti – a Joseph Goebbels reincarnation – have failed miserably in their nefarious attempts to demonize and ostracize the Jewish State. Israel continues to flourish culturally, academically, economically and politically while its Islamic Arab neighbors continue their descent into blackness and medieval backwardness. Today’s malevolent enemies of freedom, like Barghouti and his BDS campaign, are more bark than bite. In eight relentless years, they’ve failed to move the campaign beyond the fringe or even scratch the surface of Israel’s economy. Like the infamous Goebbels and his Nazis, Barghouti’s… Read more »

Palestinian refugees, in Syria, Lebanon, Jordan, the West Bank and internationally, have the right to return to their lands under international law. There was discussion as this Syrian War was getting worse whether the Palestinian refugees could be allowed to return home. It would be a great gesture on Israel’s part to repatriate them and allow them to leave the horrors of the Syrian war. Most of the Palestinians I have talked to would accept a two state solution as proposed by President Obama. But few believe that will ever happen.

A State does not have a right to exist except by consent of the governed. This would include the Palestinian people who are subjected to political domination by the state of Israel.