The Santa Barbara City Council kicked off the New Year with a new councilmember, a preliminary gang injunction filed behind closed doors and yet another storm of local citizens expressing outrage at a permanent gang injunction first proposed back in 2011.

After swearing in newly-elected Councilman Gregg Hart, re-elected Councilmen Bendy White and Frank Hotchkiss and re-elected Mayor Helene Schneider, yesterday’s meeting saw a public comment session that mostly focused on a widely unpopular gang injunction. Over twenty individuals spoke about the proposed injunction, with no one expressing support, and a wide range of local groups came out in opposition — including members of community organizations Palabra, Poder, the local ACLU Chapter, the Democratic Central Committee and the Republican Liberty Caucus. At City Council meetings last May and November, public comment sessions were also filled with citizens against the injunction, which is essentially a court-issued restraining order against 30 individuals listed as alleged gang members.

The injunction would prohibit these individuals from entering ‘safety zones’ that include wide stretches of Santa Barbara, including all of downtown, certain public parks and, during large festivals such as Fiesta, the beachfront area surrounding Santa Barbara Pier.

After community members spoke against the injunction last November, the city council decided to go forth with a preliminary injunction, during a closed session last month. The temporary injunction is outlined in a 400-page document that at one point calls listed safety zones — such as the area of State Street going through downtown Santa Barbara — areas of a “gang war zone.”

Speaking on behalf of the Republican Liberty Caucus, Brandon Morris said such language is not reflective of the opinions of those who actually live and work in these areas.

“We’ve spoken with many business owners, residents, students and tourists, and when we tell them that you’re calling 75 percent of this city a ‘war zone,’ you should see the response that we get,” Morris said. “It’s an absolute shock. Do you believe this city is a war zone?”

During a council meeting back in May, Santa Barbara Chief of Police Cam Sanchez said a rise in local gang violence created the need for a “tool” that would help law enforcement identify and handle gang members.

“Over the years, I believe that we’ve gotten to the point that we need a tool to deal with the most active [gang members],” Sanchez said.

But now many members of the Santa Barbara community are saying an injunction is not the solution. Poder representative Nayra Pacecho, fourth-year history of public policy major, said the city should be looking to other alternatives, such as after-school programs or drug and alcohol rehabilitation.

Meanwhile, Morris said crime rates have actually gone down in recent years and, after working with Councilman Hart to collect surveys from local residents, he has found that most of the public does not feel an injunction is necessary.

“Through the data that we received, we now know that there is a large segment of our community…against the injunction,” Morris said. “They feel that the current trend is an overwhelming success with the programs that are already in place and that gang violence is significantly on the decline.”

During his 18-minute testimony, Morris also said the injunction would not further the decrease in violence, but actually wreak financial havoc on the city.

“It will cost a significant impact – including decreases in tourism, decreases in property values, decreases in business [on] State Street because you guys are declaring this city the frontlines of a war zone,” Morris said.

According to Pacecho, nearly a hundred individuals have filed legal declarations against the injunction, stating they do not feel threatened in the proposed ‘safety zones,’ and that an injunction is unwarranted. On the other hand, she said the city has collected just one legal declaration supporting the proposal.

“For the research that we’ve done, they have one declaration filed in support of the injunction and that was filed by a police officer,” Pacecho said.

In March, the injunction will go to trial and Judge Colleen Sterne will decide whether or not to implement it. 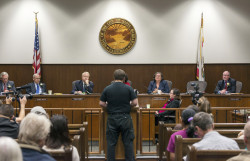 Brandon Morris, member of the Republican Liberty Caucus, speaks in opposition of a proposed gang injunction as councilmembers look on.

A version of this story appeared on page 3 of Wednesday, January 8, 2014’s edition of the Daily Nexus.