The Daily Nexus
News
Storke Plaza Gets Snowed In
November 20, 2013 at 5:00 am by Chelsea Brandwein 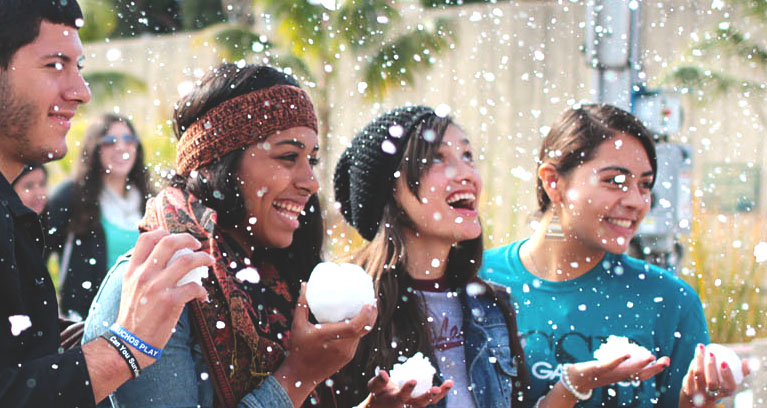 UCSB First Committee, an organization started by the Alumni Association, hosted the event after reaching a goal in donations of $2,470 through the statewide Promise for Education campaign. The crowd-funding initiative features promises made by faculty, administrators and students who agree to perform a specified task if enough money is raised.

“Due to complications on behalf of the snow company we were unable to fill Storke with snow,” Fenton said. “We did have snow fallings and an ice-block palooza, in an effort to make the best of the situation.”

First-year biology major Sydney Lezberg and second-year undeclared major Max Schultz said while they hoped for more from the event, the snow still offered them a frosty good time.

“We grabbed ice boxes and pushed each other down a little slope,” Lezberg said. “Our butts got really wet, and they still kind of are.”

First-year pre-biology major Tina Nguyen also wanted to see a little more from the event, “I was expecting the whole Plaza to be filled with snow, so I was a little disappointed,” Nguyen said, while noting some other features still tickled her fancy.

“But the igloo was really cute.”

A version of this story appeared on page 4 of the Wednesday, November 20, 2013 issue of the Daily Nexus.

I don’t really get why this is a good way to spend money…is this a way to try and raise more money or something? Or is it as ridiculous as it sounds. We frivolously spend funds on bringing snow to Santa Barbara while workers strike the following day.