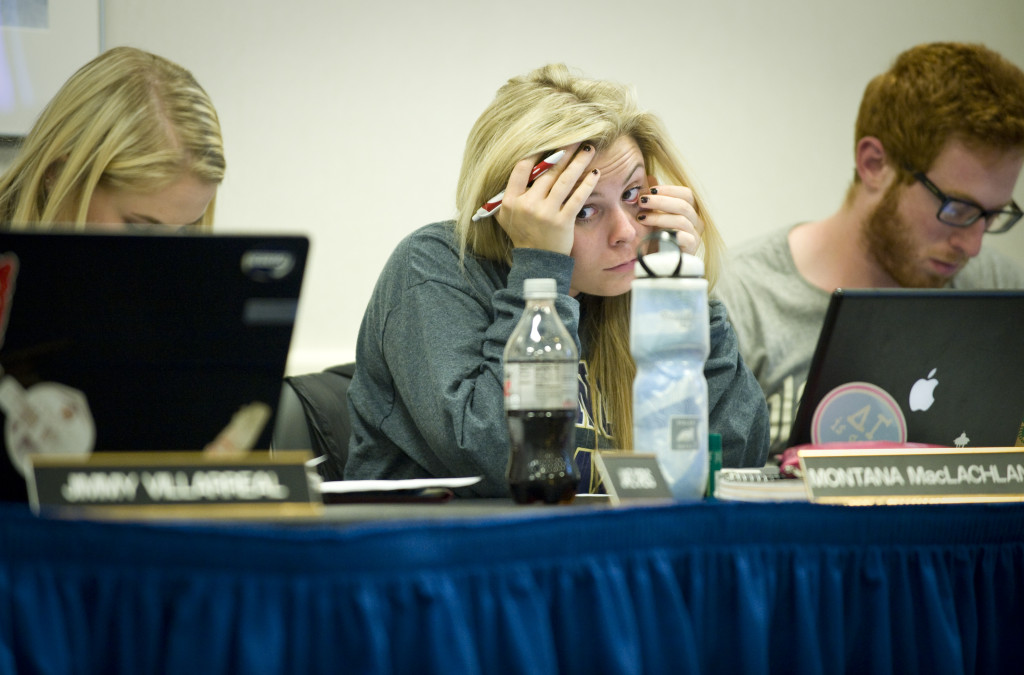 Associated Students Senate spent the bulk of Wednesday night’s six-hour meeting discussing the minimum time commitments and monetary goal of a proposed fund to provide aid to Typhoon Haiyan victims in the Philippines.

Senators unanimously agreed on the need for the fund, but debate broke out over how much money should be raised and a requirement that all senators spend at least two hours tabling for the fundraiser. In addition to the relief resolution, senators listened to a presentation on student debt, postponed taking a stance on a UC worker strike and supported changes to the California Master Plan for Higher Education.

On-campus Senator Nikki Calderon, who helped draft the resolution along with Off-campus Senator Beatrice Contreras, said there is a pressing need for more monetary allocations toward the relief fund, as she explained the nature of the catastrophe.

“It’s estimated that there’s over 10,000 dead, and that’s just from the initial storm itself,” Calderon said. “This relief money is severely needed.”

However, senators spent over an hour and a half feuding over the details of the bill, with some students not in favor of committing two hours of their week to help collect funds. In response, Contreras expressed exasperation with her peers.

“I’m frustrated that this is taking so long,” Contreras said. “While we’re here debating this, there are literally people dying.”

Off-campus Senator Montana MacLachlan said she felt it was unfair to other items on the agenda to spend such a disproportionate amount of time on the Typhoon resolution.

“We spent over one hour on one resolution,” MacLachlan said. “And then the rest of the resolutions that were on the table, we only talked about for five or 10 minutes that were completely important … I think that we need to just remember that they all need their fair amount of distribution.”

Ultimately, the resolution passed with a fundraising goal of $5,000, as proposed by On-campus Senator Colton Bentz.

Amongst other items debated more briefly was a resolution in support of revising the current California Master Plan for Higher Education, which was first implemented in 1960. A.S. President Jonathan Abboud and External Vice President of Student Affairs Alex Choate advocated in favor of the revision at the meeting, pointing out the outdated goals of the current plan.

“I want to emphasize how important passing this resolution is,” Abboud said. “Please pass this, and if it’s passed, make a big deal about it.”

A bill in support of UC workers on strike was tabled for a week due to a lack of data being provided, according to Off-campus Senator Nick Onyshko. Although senators are given a meeting agenda in advance so as to prepare accordingly, Onyshko said presenters should have provided more basic information to senators.

“The lack of figures presented by the organizers was quite disconcerting,” Onyshko said.

Several other resolutions were quickly passed with little to no debate, including a resolution requesting check-ins between UCPD and the A.S. Senate, a resolution funding a university housing forum and minor updates to the legal codes for Human Rights Board and Isla Vista Community Relations Committee.

Other projects discussed at the meeting included new bike paths and racks and progress on the “Rate My Landlord” website, amongst others.